I got a very early start. The winds were calm, the river foggy and peaceful, and the world slept. 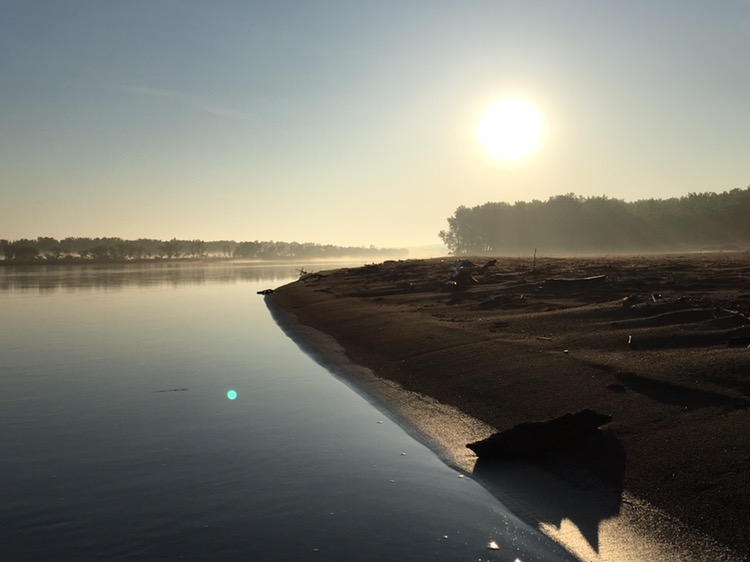 Although there was current I made good progress upstream, dodging sunken logs and switching from bank to bank when it seemed appropriate to minimize the current, much like Lewis and Clark. There wasn’t another boat on the river and for a pleasant while almost no development.

I came around one corner to see the first houses of Bismarck. Fine, beautiful houses, well manicured yards, the bank carefully riprapped.

My first goal was for Abraham Lincoln State Park. It’d been many days since my last shower, shocking in the conventional world, standard procedure in the adventuring world.

At the park, people were calmly enjoying their Memorial Day weekend. Incredibly, the bathroom and shower house was empty. How that was possible with a campground with few if any empty spaces is beyond me.

I took a wonderful hot shower then gathered my dirty clothes, dumped some laundry detergent on them and then squished them in hot water in the sink until they were considerably cleaner than before. A campground volunteer came in and I asked if a mop was handy. We teamed up to mop the shower house which seemed only fair because I had just taken a free shower and scattered my share of sand around.

Many more boats had appeared while I was taking a shower and doing laundry. I paddled up to the first bridge where the Broken Oar bar is, landing my kayak in the back of the bar in the corner of the marina.

I hid my paddle, gathered my small valuables to take with me, and walked up to the road. A beautiful bike path crossed the bridge. I looked down the river to see a madhouse of power boats. I felt like a German soldier looking out over the Allied armada on D-Day.

The bikepath went past a beautiful golf course,  loaded with big shady trees and beautiful green grass. It seems strange to be in what felt like a forest again.

I stopped at McDonald’s, sorry you health food enthusiasts. When they ran my credit card their system failed, which apparently had been plaguing them. Luckily I had cash or I would’ve been very sad.

After chowing down I walked over to the sporting goods store. They had agreed to receive my new kayak seat back.  I had tracking confirmation that it was there but I always feel slightly uneasy receiving packages on the road because fiascoes are so common.

They seemed to know who I was and a fellow went off to get the package. The first box was the wrong package and I waited around as they tried to locate it. They could not have been nicer but the fellow who knew where it was was gone for the weekend. I went grocery shopping to get something done while I waited and when I got back the seat back was still missing. I picked up a couple of items I needed and went outside and ate a pint of Ben & Jerry’s hoping my phone would ring with good news as I ate. It did not. The ice cream was delicious however.

Back at the kayak I loaded the boat with my groceries. A party boat next to me was having a  raucous time which would’ve been annoying but there were several bikini-clad women dancing on the boat roof. The people in the marina were having a great time, socializing, at least some of them partying quite seriously, and wearing a minimum amount of clothing.  I on the other hand was wearing my long khaki pants, my long sleeve green shirt, and my hat with the wrap-around sunshade. I was the Amish farm boy at spring break.

I was hoping my phone would ring before I left town with the news my kayak seat had been found but no dice. Maybe I can have them forward the seat up the river to another town, if they can find it, or maybe a River Angel can meet me and hand it over. One way or another it’ll work out.

Getting back out on the river wasn’t as bad as I thought it was going to be,  it was much worse. There was much more current and wind to deal with and many, many, more boats. The standard speed seem to be top speed and the amount of consideration for paddlers seemed to be virtually nonexistent. Twice I had to cross through the main stream of boats and I was like a possum crossing a freeway.  Even though I was trying to square my boat to the waves at their worst, one big, powerful boat passing at high-speed close to me hit me with a wave so big that water sloshed in my kayak.

I paddled for a long time fighting serious current and trying not to get swamped. When I started to get away from the populated area I looked for a place to land and camp but almost all of it was steep banks on each side and any landable spot had a boat there. I was getting tired but if I stopped paddling I would get swept downstream.

At last I found a spot, kind of a steep bank but good enough. I almost started setting up in the willows right next to the river but spotted some cottonwood trees a hundred yards away across the sand. There I set up in the shade of some cottonwood trees on a nice flat spot on the leaves. Additionally it had the big bonus of being away from the chaos of the river.

This might be a pipe dream but I’m hoping in the morning the current will be slower. It seemed slower this morning and I suspect it came up when they started releasing more water at the next dam during the day. It must be 50 miles away though so I’m not sure if that timing makes sense. Regardless there’ll be far less boats and it should be more pleasant paddling in the morning. I do know for sure that this is a very comfortable campsite. I am dry, warm, well fed, well watered, and relaxed. Colter

Clark: …20th of October 1804… Saw an old Village of the Mandans… the Countrey thro which I passed this day is Delightfull, Timber in the bottoms, Saw great nos. of Buffalow Elk Goats & Deer as we were in want of them I Killed 3 Deer, our hunters 10 Deer and wounded a white Bear, I Saw Several fresh tracks of that animal double the Sise of the largest track I ever Saw, great numbers numbers of wolves, those animals follow the buffalow and devour, those that die or are Killed, and those too fat or pore to Keep up with the gangue

Lewis: 20th October Peter Crusat this day shot at a white bear he wounded him, but being alarmed at the formidable appearance of the bear he left his tomahalk and gun; but shortly after returned and found that the bear had taken the oposite rout.—soon after he shot a buffaloe cow broke her thy, the cow pursued him he concealed himself in a small raviene.-

Clark: 21st October Sunday 1804 a verry Cold night wind hard from the N. E Some rain in the night which frosed up it fell at Day light it began to Snow and Continud all the fore part of the Day passed just above our Camp (1) a Small river… this River is Situated a Stone which the Indians have great fath in & Say they See painted on the Stone, “all the Calemites & good fortune to hapin the nation & partes who visit it”—a tree (an oak) which Stands alone near this place about 2 miles off in the open prarie which has with Stood the fire they pay Great respect to, make Holes and tie Strings thro the Skins of their necks … a butifull &extensive plain—at this time Covered with Buffalow—a Cloudy afternoon, I killed a fine Buffalow, we Camped on the L. S. verry Cold ground Covered with Snow.
Trip overview and route map with position updates:

Yeah, Bismark sucks but it was a must stop for me as well. I had worn out some clothes and needed to replace them. Plus the rude power boaters, I was glad to be out of there and on my way. You’re making great progress. Be looking for Kris Laurie somewhere up on Lake Sakakawea. At the speed you are going its likely where you will see him. stop in at Tobacco Gardens, a very nice stop, Peggy is a wonderful host. They also have a pretty good selection of items in the store.