The river was down at least a foot this morning so perhaps the Garrison Dam water release schedule would help me on the morning’s paddle.

It was definitely easier paddling first thing this morning although I think it was primarily because the river widened out for a bit. At other times, primarily when the river narrowed, I had to work hard to make decent progress. Occasionally I would stop paddling completely to take a look at the foam and the current to try to find the slowest water. Sometimes I would hit shallow spots and have to get out and drag. 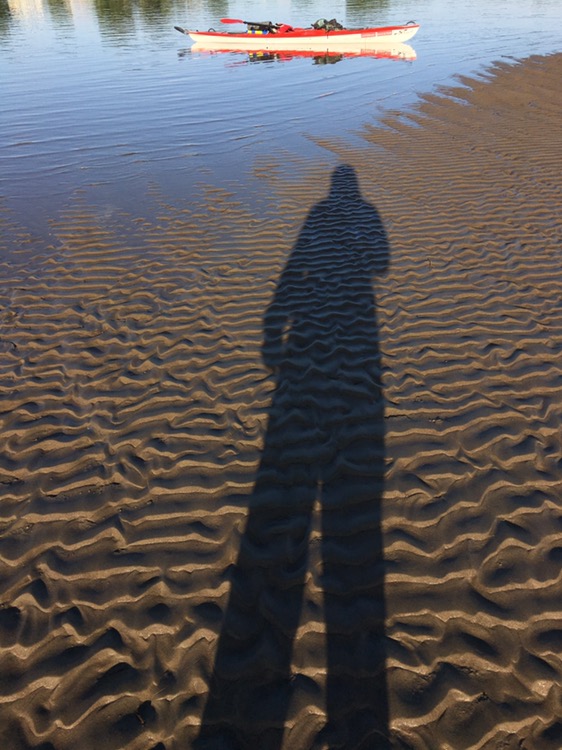 Somehow I don’t think I ever noticed before this trip, that in shallow water, say less than a foot deep but still floatable, it’s much harder to paddle than in deeper water.

Perhaps my early start put me north of the Bismarck boating crowd, or perhaps it was simply less people on the river today, but I didn’t see a single party boat. All of the few boats I saw today were fishermen.

All at once, starting yesterday, I’m starting to see a lot of young geese.  It’s interesting that they can be as large as a mallard and still be all downy. There was a merganser and about seven very small chicks, all paddling madly up the river to stay ahead of me. One by one they jumped up on their mom’s back for a free ride, the last one frantically trying to catch up. It looked like he finally succeeded.

Towards the end of my paddling day I came upon a side channel with almost no current. What a luxury it was. I thought it likely that I might hit a dead end but I thought it was worth the risk. Well I did hit a dead end, and it wasn’t worth the risk. When I got to where there was enough water to paddle it was a long way to deep water again making a portage impractical so I simply backtracked.

A thunderstorm was looming and it was predicted to potentially get very windy and rainy and possibly hail. Rather than continuing on I decided to camp in the nearby cottonwoods.

Listening to the weather once more, and hearing about potentially high winds, I looked above my tent and saw some dead branches. I decided to take the time to move my tent. I’m near a power line where they had cut a bunch of cottonwood trees. I’ve got my tent tucked in next to the woodpile as a wind break. I quit very early today and paddled maybe only 15 miles or so. An indication of how tired I was though from the last days is that I dozed off at least three times while blowing up my air mattress, which only takes a few minutes.

It’s raining and thundering now although the wind hasn’t hit, but when it does I should be in good shape. It’s supposed to be very windy tomorrow so it might be “wind day.” Colter

Clark: 22nd October Monday 1804 last night at 1 oClock I was violently and Suddinly attacked with the Rhumitism in the neck which was So violent I could not move Capt. applied a hot Stone raped in flannel, which gave me some temporry ease,-. we Set out early, the morning Cold at 7 oClock we Came too at a Camp of Teton Seaux on the L. S. those people 12 in number were naikd and had the appearanc of war, we have every reason to believ that they are going or have been to Steel horses from the Mandins, they tell two Stories, we gave them nothing after takeing brackfast proceeded on—my Neck is yet verry painfull at times Spasms.

While paddling upstream on the Columbia , Snake and Tennesseee Rivers I also noted that shallow depth made paddling more difficult. I think it is because the kayak occupies some of the cross sectional area the water flows through, thus increasing the opposing velocity of the water.