I had camped very early, sick with a bad cold. I fell asleep by 11 am and slept mostly straight through to about 6 am the next day. It helped hugely. The chills are gone, the cough is much better.

It froze hard. My down sleeping bag is rated to 30 but with my sleeping pad and balaclava I was toasty. I wore my jacket and balaclava hiking in the morning. On this flat ground I didn’t break a sweat.

The birds, perhaps inspired by the frost, were singing loudly. Lots of the restaurants along the trail are still closed this early in the season. Based on that I didn’t have much hope for tiny Hartsburg. The cafe wisely had a sign with their hours at the kiosk saying “right next to the red caboose.”  There was the caboose, and Dotty’s with a red “OPEN” sign.

Dotty knew how to run a business. It seemed like every local that was awake, about a dozen, was headed there. A couple of older ladies sat at the next table. One cheerful, one glum. Perhaps there were valid reasons for their respective moods, but I’m betting they were each wired that way. What a gift for the people born naturally cheerful. Coffee and hotcakes were a treat.

I reached Cooper’s Landing. I’d been told to sign the paddle. I knew many of the names written there, paddlers of The Big Muddy. 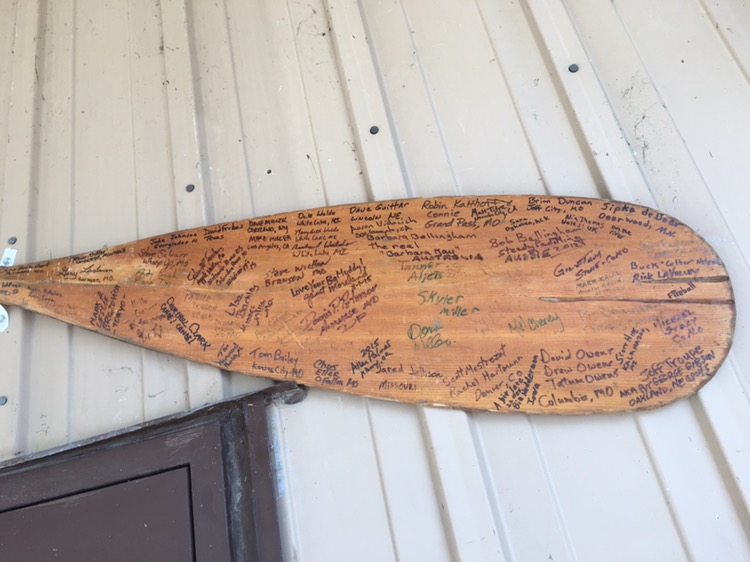 I got a freshly made burrito washed down by a Pepsi with an ice cream sandwich for desert.  Keith Fletcher, their musician, sang a world premier tune for me. It was a fun stop.

The trail passed a rock arch that Lewis and Clark had noted.  (See below)

As the day grew late I had Katfish Katy’s in my sights, a campground with showers and a store. CLOSED! Bummer. I walked a few hundred yards and found a perfectly serviceable campsite, minus the shower and goodies. It was a good twenty mile day.

passed a Creek on the L. S. abt. 15 yds. wide. Mast Creek, here the Sergt. at the helm run under a bending Tree & broke the mast, Some delightful) Land, with a jentle assent about the Creek, well timbered, Oake, Ash, walnut &c.

at 11 oClock brought a Caissie in which was 2 men, from 80 League up the Kansias River, where they wintered and caught a great qty of Beever but unfortunatey lost it by the burning of the plains, the Kansas Nation hunted on the Missourie last Winter and are now persueing the Buffalow in the Plains, passed a Projecting Rock called the Manitou a Painting from this Deavel to the Pt. on the Lbd Side

passed a place in the projecting rock Called the hole thro the rock, a round Cave pass thro 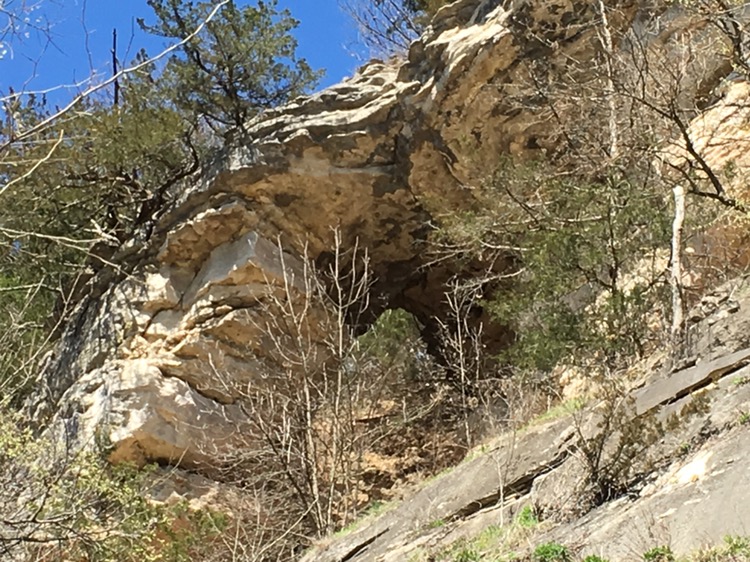 Short Day on the Trail

So glad you are feeling better!