It was crazy early when I started rousing myself. Orion was bright in the sky.

Breakfast was cold cheeseburgers, a pastry, and excellent coffee, all of which John had brought. Possibly my favorite breakfast of the trip.

There was a good breeze across the dark water when I launched. I had to watch carefully for rocks or pilings. A glow appeared in the east and slowly spread across the sky. The spooky mystery of the river at night receded and was gone.

Today was windier than I expected but by hugging the shore I made steady progress, staying on the Oregon side all day. Only when the wind was angling sharply towards my shore was the going especially tough, with considerable waves hitting my boat at an angle. It made all the difference in the world that the water was fairly warm and that if I had capsized I would immediately have been washed ashore.

Hillside trees started showing up yesterday, and today I was back in timbered country. The very brief current just below the dam yesterday, however, was long gone today.

At Mozier I stopped for a break at a paddle boat and windsurfer launch site. There was a sign there that said river mile 174, and also had a Lewis and Clark emblem on it. I took a good break and ate a giant chocolate chip cookie that John had brought me.  And more cheeseburgers.

I thought the wind was going to stop me there but it slackened a bit so I pushed on hoping to reach Hood River. When I got to Koberg Beach State Park I landed. A couple of guys told me in a not unfriendly fashion that this landing was for Indian fisherman only. The landing for white people was around the corner of the big cliffs.

There were now big waves rolling down the river. I wasn’t crazy about paddling around that point but I needed to find a camp spot. Rounding the corner was as bad as I feared. Big waves were bouncing off the cliffs, causing waves to come at me from all directions. I was relieved to run my kayak up on the nice sandy beach on the other side. After putting out my solar chargers I set up my tent on a nice flat spot under the trees.

I got a text from Seth, a fellow who’s been following my trip along with his kids, and someone that I’ve exchanged emails with for years.  We arranged a meeting at my camp. When he arrived we drove into Hood River and I bought some groceries before we stopped for some Mexican food to go. On the way back we saw wind surfers and kiters zipping across the river at an incredible speed. I was mighty glad not to be out on the water in my kayak.

Back at camp we talked about firefighting and hunting and his prior life as a forward air controller with the Air Force in Iraq and Afghanistan.  Seth is a very impressive person and a nice guy. Thanks for stopping by Seth! 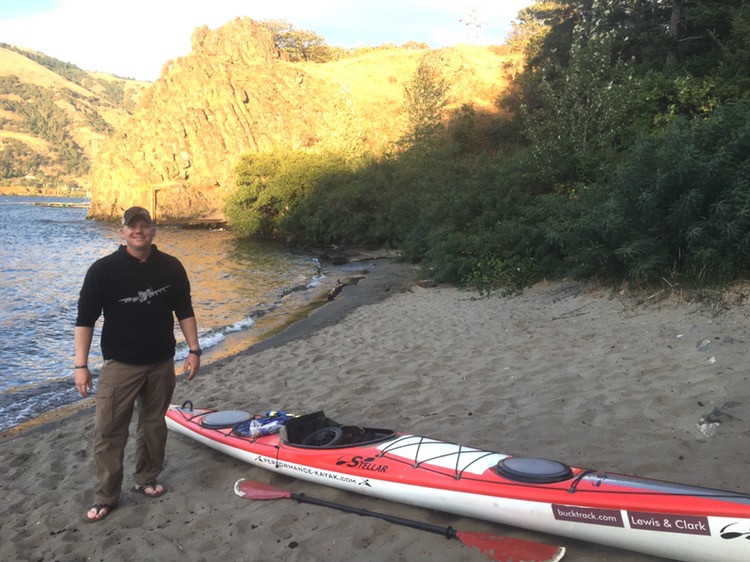 I still managed to put in 17 miles today so I was pleased with that progress. The conditions tomorrow are supposed to be similar, but the day after is supposed to be fairly calm. Colter

Clark: October 27th Sunday 1805… 2 Chiefs and party Continue with us, we treat them well give them to eate & Smoke, they were joined by Seven others, from below who Stayed about 3 hours and returned down the river in a pet, Soon after the Chiefs deturmined to go home we had them put across the river the wind verry high, we took a vocabelary of the Languages of the 2 nations… not withstanding those people live only 6 miles apart, but fiew words of each others language—the language of those above having great Similarity with those tribes of flat heads we have passed—all have the Clucking tone anexed which is predomint. above, all flatten the heads of their female children near the falls, and maney above follow the Same Custom… Some words with Shabono about his duty…

Clark: October 28th Monday 1805… I entered one of the houses in which I Saw a British musket, a cutlass and Several brass Tea kittles of which they appeared verry fond Saw them boiling fish in baskets with Stones, I also Saw figures of animals & men Cut & painted on boards in one Side of the house which they appeared to prize, but for what purpose I will not venter to Say,-. here we purchased five Small Dogs, Some dried buries, & white bread made of roots, the wind rose and we were obliged to lie by all day… The wind which is the cause of our delay, does not retard the motions of those people at all, as their canoes are calculated to ride the highest waves, they are built of white cedar or Pine verry light wide in the middle and tapers at each end, with aperns, and heads of animals carved on the bow, which is generally raised. Those people make great use of Canoes, both for transpotation and fishing… the harbor is a Safe one, we encamped on the Sand wet and disagreeable one Deer killed this evening, and another wounded near our Camp.