Last evening Nan Floyd flew over my camp on the way back from her fire where she was Air Attack. She drove out later with some awesome Chinese (or was it Thai?) food, and a growler of beer. Nan was a smokejumper for many years out of North Cascades. We had a very fun talk about mutual friends and smokejumping. She is an outstanding, cool person. Thanks a lot Nan! 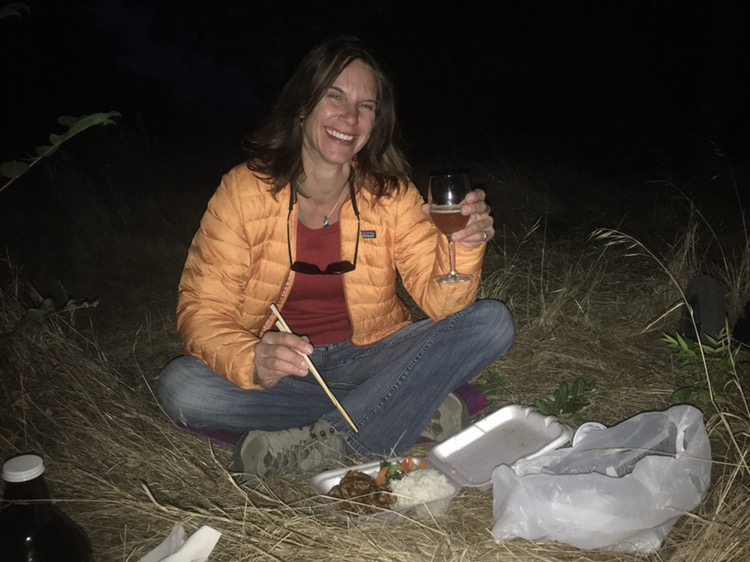 This morning was cloudy, breezy, dark and rainy, relatively dismal. I crossed the river, already sporting whitecaps, to the more protected shore. There was a flashing CAFE sign and although it was painful I passed up a hot breakfast to make miles before the wind came up.

The wind actually lessened as the rain increased, the hardest rain in weeks. When I launched I thought my rain gear and spray skirt would prove too warm but it felt great.

I was making very good miles. I took a shortcut through a fairly narrow channel. The low clouds on the dark bluffs in the falling rain  reminded me of Admiralty Island.

There were fishing boats checking the many gill nets. I stopped a couple of times to pick blackberries from the boat, but I took no real shore breaks.

The low winds held. I couldn’t believe it when I made 20 miles before noon and I could see the next dam ahead. This dam was going to be a tough portage. I wanted to “Lock Through.”  I pulled the signal rope but there was no answer. I called the Lock Master who cheerfully told me kayaks can’t lock through. Many dams do, but apparently not on the Columbia.

I also learned there was no portage put-in point below the dam. I’d made an alternate plan though.

I guy at the pull-out watched me with arms folded as I put my cart on. He assured me I was paddling upstream. He was a bit odd.

My only portage route was a bad one. I wheeled my cart as far as I could and then took a load of gear while scouting the route out: down the railroad track, down a steep rip-rapped embankment, a hundred yards down an old road then down another very steep hill followed by more rip-rap. Next to my route was a paved ramp leading to the river. That was closed. For security.

It took three loads. I was sweating from effort and trying not to fall as well, and also the stress of waiting for someone from the Dam or Railroad to tell me I couldn’t be there. Carrying the kayak was the most challenging. I made it though, as I knew I would. 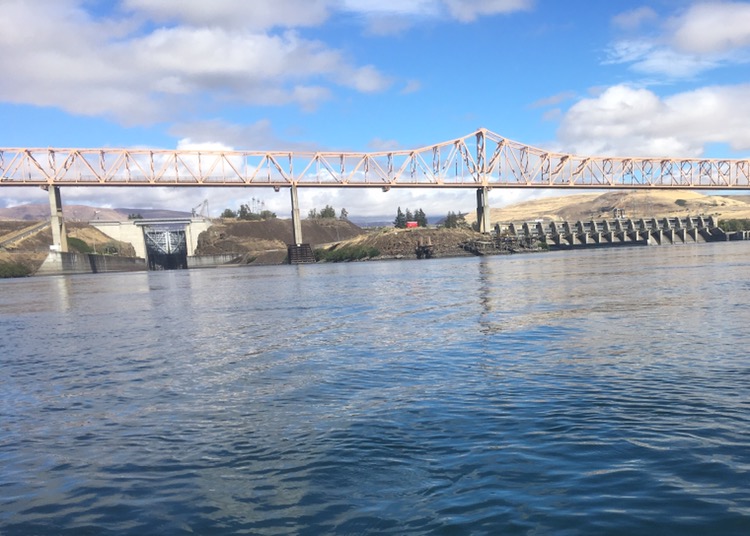 I made four more glorious miles before I turned the corner and had the wind and waves in my face. I paddled to the first landing which happened to be a park. They gave me unofficial permission to camp there. A homeless guy befriended me for a while.

I texted yet another old smokejumper buddy, John McColgan, who was planning to meet me. At 7:00 he showed up, laden with burgers and other great food and drink. We had a great reunion on the bank of the Columbia. I really appreciate you making the long drive, John! Not the first time you treated me well on a long adventure. 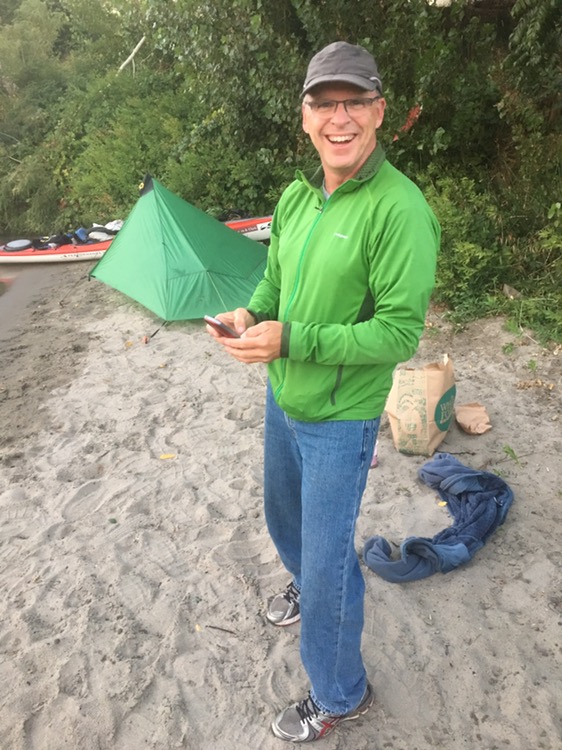 Clark: October 25th Friday 1805 A Cold morning, we deturmined to attempt the Chanel after brackfast I took down all the party below the bad places with a load & one Canoe passed well, a 2d passed well I had men on the Shore with ropes to throw in in Case any acidence happened at the Whirl &c—the Inds on the rocks veiwing us the 3rd Canoe nearly filled with water we got her Safe to Shore. The last Canoe Came over well which to me was truly gratifying Set out and had not passed 2 mils before 3 Canoes run against a rock in the river with great force no damg. … river about 1/ 2 a mile wide and Crouded with Sea otters, & drum was Seen this evening we took possession of a high Point of rocks to defend our Selves in Case the threts of those Indians below Should be put in execution against us. Sent out Some hunters to look if any Signs of game, one man killed a Small deer & Several others Seen I killed a goose, and Suped hartily on venison & goose. Camped on the rock guard under the hill.

Clark: October 26th 1805 Saturday a fine morning Sent out Six men to hunt deer & Collect rozin to Pitch our Canoes, had all our articles put out to dry—Canoes drawed out and repaired, the injories recved in drawing them over the rocks, every article wet in the Canoe which nearly Sunk yesterday… one man giged a Salmon trout which we had fried in a little Bears oil which a Chief gave us yesterday and I think the finest fish I ever tasted, Saw great numbers of white Crams flying in Different directions verry high. The river has rose nearly 8 Inches to day and has every appearance of a tide, from what Cause I can’t Say… The flees my Self and the men got on them in passing thro the plains… are very troublesom and with every exertion the men Can’t get rid of them, perticilarly as they have no clothes to change those which they wore...

Hi Buck,
Just thought I’d make another quick comment now that I see you are approaching “The Dalles”. I had an adventure there back in about 1980 when a friend flew me there in his Cessna 180 (fellow smokejumper Scott Fairchild and my first flight instructor) I went to the Dalles airport to get some dual instruction in a Pitts special. What a thrill that was. Not the same sort of thing you are experiencing, but still brings back memories for me.

Best of luck on your remaining journey………..

Hi Lundo,
That must be a big milestone in your life. Beautiful, windy country here!
Buck