I was going to describe my camp as nice and quiet, but I could hear the interstate and every couple of hours a train would rush nearby. I still slept great though in my little flat spot in the bushes.

It was 5:45 when I started paddling, nearly an hour before sunrise. The goal was at least two good hours before the wind shut me down.

Peregrines and ospreys flew past, ospreys are very common. Blue and white herons stalked the shallows. There were scores of treaty gill nets running out from shore today, some places had fishing platforms as well. I got some cheerful waves from fishermen.

Speaking of waves, the wind treated me very well at first. I didn’t land the kayak for hours. When I blasted through 10 miles I thought “is 20 doable?”

I came around a river bend and said “Whoa!!!” Here was Mount Hood, looming much higher than I’d last seen it. With the dark basalt bluffs on each side of the river it was very scenic. I took an iPhone photo but without a zoom it wasn’t done justice. The reality was really, really cool though! 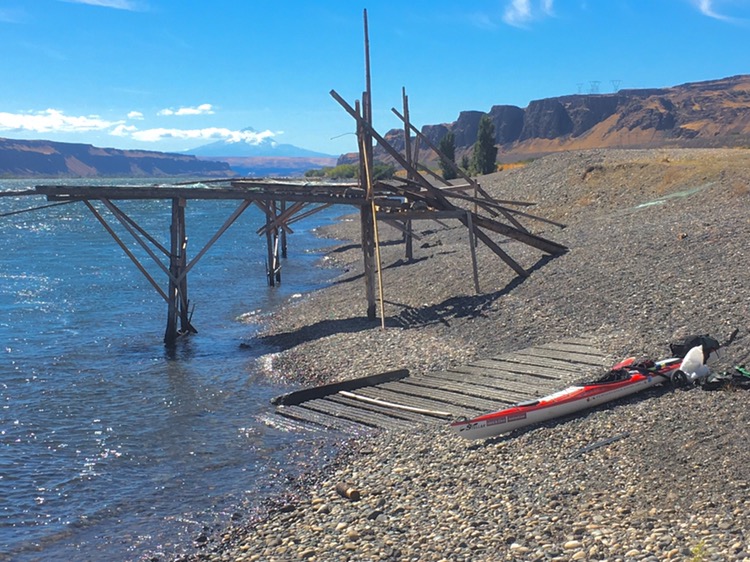 When I neared 20 miles it seemed possible I could make John Day Dam today. The wind was coming up.  I finally saw the dam and had to cross the river to the portage. There was considerable splashing of water over the bow but the crossing went well. I crossed through a huge culvert to the portage. 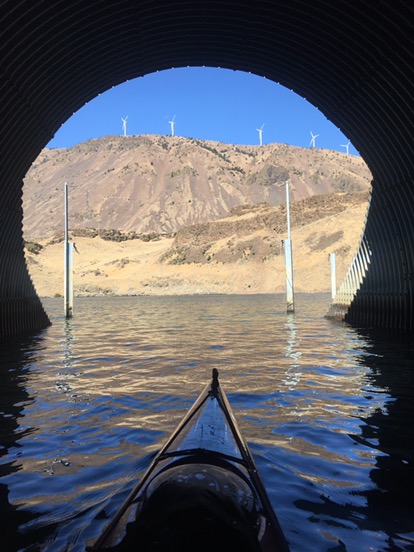 I texted several friends who are considering meeting me up ahead. Then I wheeled my kayak over the dam and down the road near the river.

I looked at the whitecaps and thought, “Heck, I’ll just keep rolling down the road a few miles!” The road turned to rough gravel so I pulled my boat down to launch to see how it went. Even before launching I decided to go down the road to find a campsite and in a mile found a good one, mostly hidden beneath some trees.

My friend Nan was going to drive out with some food this evening but it looks like she is going to be doing some firefighting instead!  Put it out fast, Nan!

My camp is almost exactly where Lewis and Clark camped on October 21, 1805.

Clark: October 21st Monday 1805… last night we could not Collect more dry willows the only fuel, than was barely Suffient to cook Supper, and not a Sufficency to cook brackfast this morning… we came too at those lodges, bought some wood and brackfast. Those people recived us with great kindness, and examined us with much attention, their employments custom Dress and appearance Similar to those above; Speak the Same language, here we Saw two Scarlet and a blue cloth blanket, also a Salors Jacket… here we halted a fiew minits to examine the rapid before we entered it which was our constant Custom, and at all that was verry dangerous put out all who could not Swim to walk around, after passing this rapid we proceeded on passed anoothe rapid at 5 miles lower down, above this rapid on five Lodges of Indians fishing &c… The probable reason of the Indians residing on the Stard. Side of this as well as the waters of Lewis’s River is their fear of the Snake Indians who reside, as they nativs Say on a great river to the South, and are at war with those tribes, one of the Old Chiefs who accompanies us pointed out a place on the lard. Side where they had a great battle, not maney years ago, in which maney were killed on both Sides…