When I looked at the river this morning I could hardly believe it. It was unrecognizable as the river I had paddled up yesterday. What had been bank to bank flowing river was now an enormous mud flat, with what appeared to be only one trickle of water that I could wade across, ankle deep. Incredibly that guy had been right, they are reducing the flows to virtually nothing at times. As a couple people mentioned in comments it’s because they’re matching the need for electricity to the time of day. It makes me wonder if perhaps the large numbers of bald eagles at this spot in the winter, is due to the fact that the river gets drawn down and fish get stranded.   There was remaining  water, undoubtedly deep, up by the dam and a short distance downstream, and I’m sure more and more farther down.

My kayak cart sits towards the back of the boat, so I packed the boat with the weight rearward for a better balance.   With a couple of adjustments I was rolling smoothly down the campground road. It was a nice paved, tree-lined road, winding along the river, quiet in the early morning. 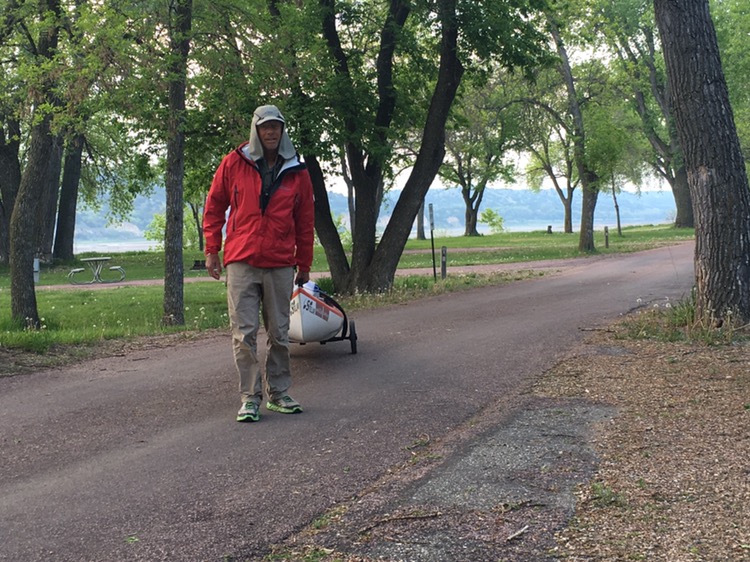 I stopped and filled up my water bottles and stashed them in the very back of the boat.

When I started going up the steeper part of the road heading up the dam I heard a scraping sound. The stern of the kayak had scraped on the asphalt, that was no good. With a plastic boat it would be no big deal but with this composite boat it would grind the outer surface away quickly. I put a couple of pieces of duct tape for protection but when I checked after the next couple of scrapes it had quickly ground through. It certainly would be unworkable on the long portages to crouch slightly every time I thought it might scrape, it would be very uncomfortable. I found a Gatorade bottle, cut each end off, and then cut the bottle in half, nesting one half in the other, taping that on the point of contact. By the time I got to the put-in point it had done just minor damage to my bottle guard. I did, however, find a large square plastic jug that I cut into four lengthwise corner pieces that I nested together for my next portage. That should do beautifully. Despite the tinkering that 2 1/2 mile portage was a piece of cake, even with 120ish pounds of boat and equipment and food and water. 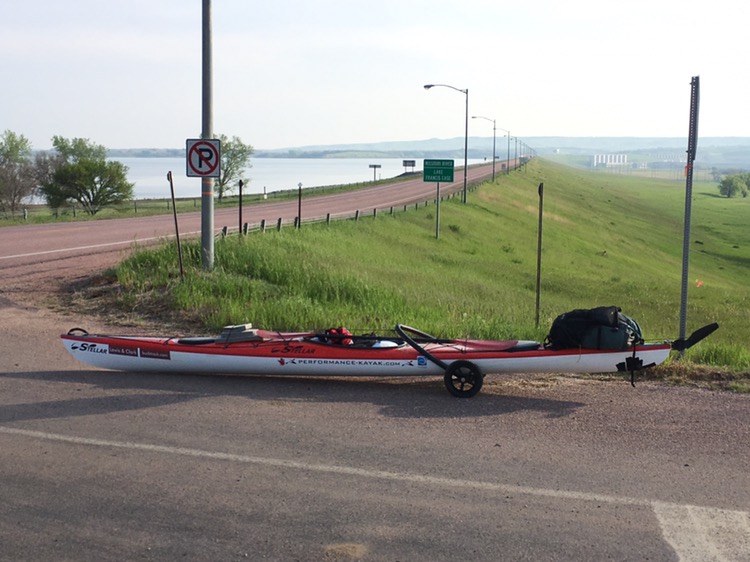 I repacked the boat and was surprised at how easily I fit everything in now that I had some practice, and of course with a bit less food to carry.

I paddled out into the lake for a way. There was a nice tailwind so I deployed the sail and enjoyed a quick 2 miles or so of effortless traveling. The wind was getting stronger though and there was a little bit too much going on with sail and waves.  I steered over toward shore to come up with a plan. I am still a little green with the sailing so I stowed the sail and started paddling which was more familiar and where I had more control.

At this point I am about two thirds the way down this east/west oriented section of lake. When the lake turns the corner the waves will be coming sideways which is no good. At that point I’ll call it a day and wait for tomorrow. The winds are going to be slightly lighter and turn a better direction for me.

I have no doubt there are some people who would’ve continued forging ahead today with this kind of wind and waves, but I’m going to be playing it conservatively.

One strategic error I made is that I should’ve wheeled my boat across the dam and launched on the other side. Then I could’ve used the shore of the lake as a wind buffer when I turn the corner, but that’s a lesson learned. I do plan to listen to the weather forecasts to make the best decisions I can strategically.

I saw a red headed woodpecker today and I don’t think I’ve seen one for many years.  They were common on the farm when I was a kid. Seeing one was like seeing an old friend. Climbing the hill to get reception to send this I also noticed two plants that I consider to be Western species, one a spiny plant, some member of the Yucca family I think, and the other a prickley pear cactus or closely related cacti.

Happy Mother’s Day to my mom, Marlys Nelson. Thanks for the support!

Clark: 8th of September Satturday Set out early and proceeded on under a gentle Breeze from the S. E, at 3 mes. passed the house of Troodo where he wintered in 96. Called the Pania house, above is high hills on the S. S. on the S. S. much higher hills than usial appear to the North distant 8 miles recently burnt-pass 3 Small Islands at about 5 miles on this Course on the S. S. here Capt. Lewis Killed a Buffalow in the river, and this men one other Came to on the lower point of an Island in the midlle of the river Called Boat Island and incamped, jurked the meet Killed to day Consisting of 2 buffalow, one large Buck Elk one Small, 4 Deer 3 Turkeys & a Squirel, I joined the boat at this Camp, The Countrey on the S S. is pore & broken.

Always felt good for me to finish a portage in good stead. Not sure if you have a daypack along or not but I had good success shifting some of the weight to my back from the boat. It seemed to be less effort. Sounds like you have your weight in check so it may not make a difference. You seem to be an early riser, take advantage of it on the lakes and get some miles done early on before the winds kick up at 10ish or so. You’ll find your own tempo for switching from side to side,… Read more »