I talked to someone a few days back who said there was “no water” in the river just below Pickstown. “A buddy of mine has been driving around on the riverbed” he said.

Yesterday the river seemed very low so his statement seemed to be an exaggeration reflecting that fact. This morning the water had fallen a couple more feet from last evening.

After a few hours though, I noticed during a shore break that my kayak started floating. I marked the edge of the water and sure enough it was coming up pretty fast. There was much more current as the day progressed and the sandbars were disappearing.

I had a headwind and then a sidewind and then suddenly I had a tailwind. I pulled over to think about using my sail. Having never used it I reviewed the instructions once more, it seemed pretty simple. I paddled back out onto the river and let the sail pop open. For the next hour I sailed up river! When the wind was light I couldn’t make any headway but when it was blowing really good I was going faster than I could paddle, which was absolutely delightful. The good wind left however, and although conditions were marginal later I gave the sail a whirl a couple more times, then I finally just stowed it. Under perfect conditions I think it will work great though.

As I neared the Fort Randall dam I really had to paddle. Far from there being almost no water the river was nearly full bank to bank. I’m curious what the strategy is, varying the dam’s water release so much.

There’s enough current that I decided to pull out at the first possible road access below the dam, making a longer portage and an easier paddle. I am camped here and will be doing the portage tomorrow with my wheeled cart. 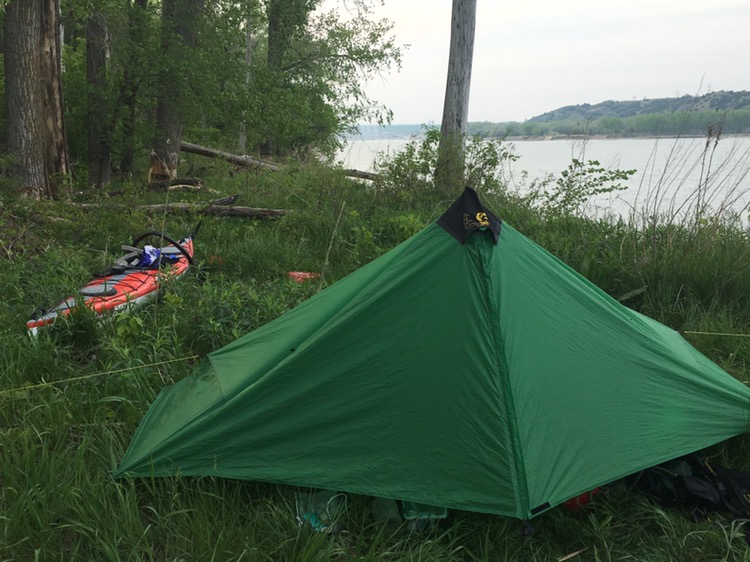 I made two posts today due to lack of coverage yesterday. This is the second one. Colter.

Clark September 5th Wednesday 1804…we made a Ceeder Mast, our hunters brought in three bucks, and two elks this evening which we had jurked One of the hunter Shields, informed that he Saw Several black tailed Deer…

6th Septr Thursday 1804…I saw Several goats on the hills on the S. S. also Buffalow in great numbers

7th Septr. 1804 Set out at day light we landed after proceding 5 1/2 miles, near the foot of a round mounting which I saw yesterday resembling a dome. Capt Lewis & my Self walked up, to the top which forms a Cone and is about 70 feet higher than the high lands around it, the Bass is about 300 foot in decending this Cupola, discovered a Village of Small animals that burrow in the grown (those animals are Called by the french Pitite Chien) Killed one & Cought one a live by poreing a great quantity of water in his hole…the Village of those animals Covs. about 4 acrs of Ground… [I saw this distict hill today.]

I was told the water flow increased as power demands increased during the day, quite significantly if the temperatures are on the rise. I noticed a rise of at least 18 inches on one day by placing a stick at water level when I stopped to make camp and then checked again before getting in the tent. Hope the good weather holds for you and the portages are not too unpleasant.