There was beautiful orange sunrise. I was paddling by 6:30. 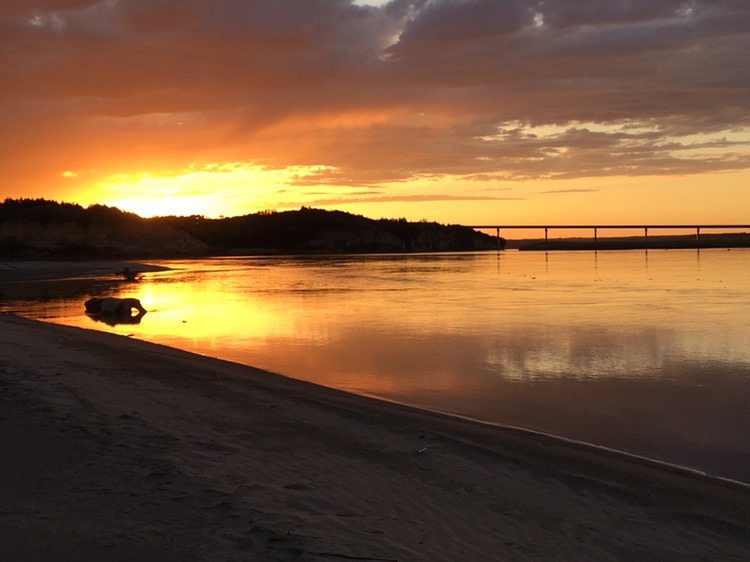 Although the current was significant I was making steady progress. The river was braided, often with two or more channels split up by sandy islands, with some channels dead ends.

Looking ahead I saw at least two channel options. I consulted the GPS app on my iPhone. I realized again how dramatically the channels change. It showed me on the left side, I was actually on the right.

There was a spot where I had to sprint through some very fast water on a corner. I dug in. Compared to the water I was flying. I glanced at the bank and found I was going backwards. Cautiously I angled slightly across as I got slowly swept downstream. On the other side I jumped out and started walking my boat upstream.

In places there was quicksand. The current moved the sand out from under my feet and I could feel myself sinking. No danger though, hanging onto the boat. For about 45 minutes I walked the kayak along one bank until it got too deep. Again I had to paddle across very fast water, then walked the kayak up the other side. I knew the railroad bridge marked the Niobrara so as I approached it I watched for the channel where the Missouri split off. Finally I could see: the Missouri had already split off. I was going up the Niobrara.

That was a significant bummer, and confusing. How did I miss the confluence?  I knew it wasn’t far away, it had to be on this side of the line of bluffs, less than a mile away.

The good news is I got to paddle downstream for a few hundred yards. I saw what looked like a side channel of the  Missouri, but after a mile found it was the main river. I’m not surprised I got fooled. The Niobrara had much more current.

The Missouri was running clearer now. The Niobrara famously runs full of silt and debris. Now I was paddling in much slower current so I made steady progress.

There were lots of eagles hanging out around the long ridge on the NE side of the river.

I stopped at Verdel landing for water but the pump wasn’t working. I’ve got enough anyway. My mostly headwind turned into a sidewind. I used the high bank to escape it. For many miles there were cliffy bluffs on the left. With the moderate current I was making good miles. I stopped for a break on the fine gravelly shore. It was in the 80s so it was great having the shade of the cliffs.

I had to get out and drag the boat through shallow water in places. Something I’ll be doing a lot I’m sure.

I had to paddle a mile or two more than planned to find a good campsite. I must have come about 24 miles today! Colter

4th September Tuesday 1804 a verry Cold wind from the S. S. E, we Set out early and proceeded on the mouth of a Small Creek in a bend to the L. S. Called White lime, at 11/ 2 miles higher up passed a large Creek on the L. S. Called or white paint between those two Creeks (the latter of which is abt. 30 yds. wide) we passed under a Bluff of red Ceeder, at 4 mes. 1/ 2 passed the mouth of the River Que Courre (rapid R) on the L. S. and Came to a Short distance above, this River is 152 yards wide at the mouth & 4 feet Deep Throwing out Sands like the Platt (only Corser) forming forming bars in its mouth… [NiobaraRiver] Clark