I wasn’t quite as stiff this morning as I had feared, as a matter fact I felt pretty good.

There was a very heavy dew last night but I wasn’t going to stick around until my tent dried.

Not long after I started paddling there was a detectable current, which kept getting stronger as the river swung over to the Nebraska side.

Finally the lake and the marshy maze just above the lake were behind me. I started paddling through a section of the river which has been described as one of the most well preserved, natural sections on the entire Missouri River. The river was still braided however so selecting the right channel was a skill I tested all day.

There were many turtles today as well as waterfowl  and shorebirds. Many fish jumped including a big sturgeon. I saw a snake swimming across the river, can anyone identify it?

I took a break amongst some beautiful oak trees on the Nebraska side of the river, it seems strange to be back in Nebraska after I left it two weeks or so ago.
It was the warmest day of the trip and made it in the 80s. I would paddle until I needed a break, when my arms, or my back or my butt needed it. One break I really enjoyed was on a grassy spot next to the river. What made it so delightful on this hot day was a piece of plywood lying there. I leaned it up with a big stick and it made perfect shade. Some kind of plant was blossoming and the air smelled sweet.

At the end of the day the current was the strongest of all. After passing the first bridge I had to paddle hard to make significant progress. I set up my tent on a sand shelf well above the river in a spot protected from the wind by some giant species of grass. 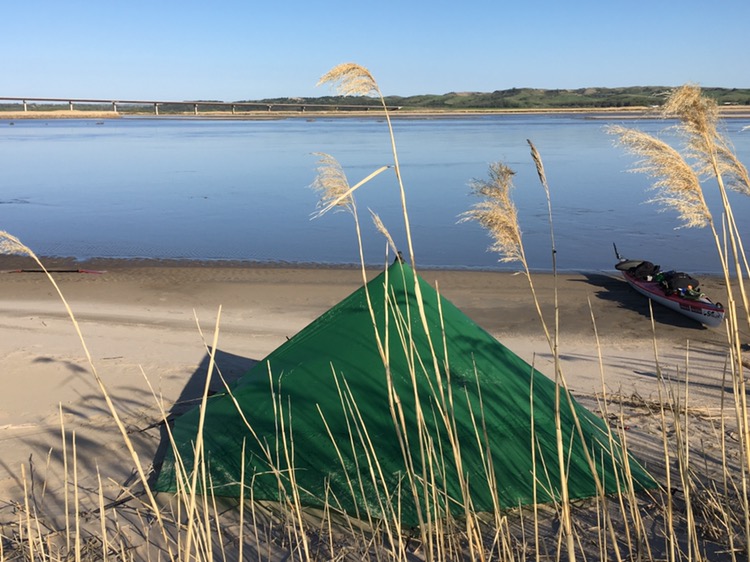 It is absolutely delightful to lie back on my air mattress, and to relax. I ate a cold can of turkey chili and it was awesome. I’m pleased with my progress on a genuine upstream paddle, with a headwind. Colter

Clark: 2nd September Sunday 1804…I went out and made a Survey of the antient works [forts] which is Situated in a level plain about 3 miles from the hills which are high…I am informed by our freench interpeters that a great number of those antint works are in Different parts of this Countrey…

September Monday 1804…Great quantities of Plumbs of a most delisious flavour, I have collected the Seed of 3 Kinds which I intend to Send to my brother, also Som grapes of a Superior quallity large & well flavoured, the river is riseing a little, Several wild Goats Seen in the Plains they are wild & fleet Elk & Buffalow is verry plenty, Scercely any timber in Countrey except a little on the river in the Points. Saw Some Signs of the 2 men who are a head, Colter has not over taken Shannon…

Beyond the Niobrara
Subscribe
8 Comments
Inline Feedbacks
View all comments

The snake looks like a bull snake, although in many bull snakes there isn’t as distinct a difference in color between the dark spots and light background.

Thanks Peter. I had been thinking fox snake?

There aren’t any fox snakes in Montana, so I’m not used to identifying them, but some googling suggests that you could be right. Its coloration is more regular and has more contrast than a typical bull snake.