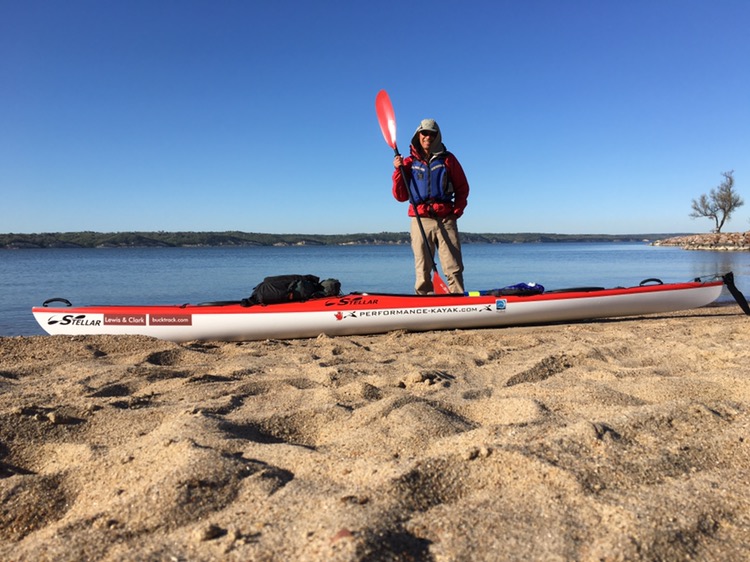 May 4, 12:30. The kayaking has begun! I took down camp, loaded the boat and launched shortly before 9 am. I’m making this post now because for the next few months coverage will be spotty.

There may be times I can’t post for days, but no need for concern. I have my Inreach satellite device which I could use to “dial 911” in an emergency.

It’s a beautiful sunny day, maybe a 10 mph headwind. I’ll be taking it easy for the first days or weeks until I get in paddling shape.

Update: I am a tired puppy this evening after working a bunch of muscles that haven’t been used much in the last few weeks. I made it about 17 river miles I would estimate. There was no noticeable current the whole way although there was a significant headwind at times.

Today was a completely different world than what I’ve been experiencing since the start of this trip. I didn’t speak to a single person until I got to my campsite this evening. I saw lots of wildlife: whitetail deer, Canada geese, bluewing teal, buffelheads, bluebills, and many more species as well. A bald eagle was chasing an osprey.  Enormous carp came rushing out from the bank in marshy areas, and the first time I saw it my instinct is that it was some type of animal like an alligator.

Much of the day I was paddling along bluffs.

Later I did the first miles of “the maze,” the braided river at the head of the lake.

Tomorrow I will have current and a headwind so will be interesting to see how it goes. I’ll just do like I did today, go as far as I reasonably can without pushing too hard. I’ll bet I’ll be stiff and sore in the morning! Colter

Clark: 30th of August Thursday 1804…The Souix is a Stout bold looking people, (the young men hand Som) & well made, the greater part of them make use of Bows & arrows, Some fiew fusees I observe among them, not with Standing they live by the Bow & arrow…

31st of August Friday…—a curioes Society among this nation worthey of remark, ie, formed of their active deturmined young men, with a vow never to give back, let the danger or deficuelty be what it may, in war parties they always go forward…in a battle with the Crow de Curbo Indians out of 22 of this Society 18 was killed, the remaining four was draged off by their friends…

September 1st Satturday 1804…We Set out under a jentle Breeze from the S. (It rained half the last night) proceeded on pass the Bluffs Compsd. of a yellowish red, & brownish White Clay which is a hard as Chalk this Bluff is 170 or 180 feet high…

Buck, Congratulations on your progress. I hope the transition to paddling goes smoothly. Drive on!

Thank you Boats! I’ll have to get in shape all over again.