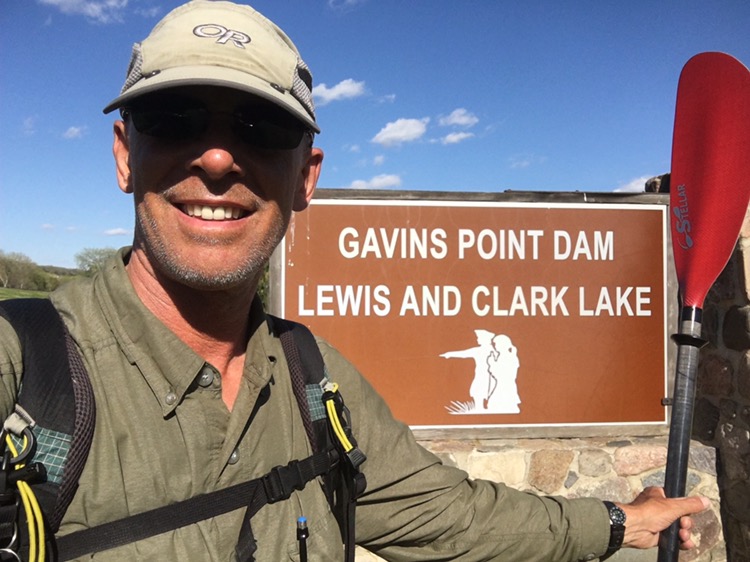 I didn’t sleep as soundly as I normally do last night, I had so many things running through my head, plans I was making, what I needed to do in town tomorrow, what personal business considerations needed to be addressed, the best way to get myself my kayak and all my gear to Lewis and Clark lake.

In the morning I spent several hours in preparation, beginning to pack things in dry bags or thinking about what should go where. I have a new DeLorme Inreach and I was trying to get it registered and there was an issue they were working on. Wild turkeys were walking around outside. Chuck chatted with me for an hour or more before he headed to work.

As I thought of things I needed to do and buy in town I added them to a list, and when I had things pretty well organized at Chuck’s place I used his pickup which he had graciously lent to me and drove into town. I bought groceries for two weeks, a few other miscellaneous items, and I mailed a small box of backpacking gear that I had swapped out for things more appropriate for kayaking. For example now I have a better rain coat and rainpants and tent.

When I got back from town I loaded up the kayak in the back of Chuck’s pick up. I had been kicking around various ideas in my head with Chuck’s help and finally decided it was late enough in the day so I would just haul my kayak and gear to a campground not far above the dam. As I headed down the road I admit I was just slightly worried that somehow my kayak would come untied and go bouncing down the road in splinters. Imagine how disappointing that would be!

Everything made it safely to my camp spot however and I locked my nice new kayak to a fire grate just to be safe, then drove back to Chuck’s place. My personal rule on this trip is to cover all forward progress under my own power. I had a light load of small expensive items in a pack, things I didn’t want to leave unattended at the campground. I grabbed that pack and my new paddle and started walking back to my kayak, 3 or 4 miles away.

It was a nice walk. At the end it was along a bike path that wound past sweet smelling lilacs and along the lake. I saw some 13-lined ground squirrels,  a familiar animal from my childhood that I had first seen on this trip yesterday. I saw cormorants for the first time on this trip today as well and some huge, fuzzy Canada goose goslings.

I set up my tent in a nice grassy spot next to the lake, with cliffs on the opposite shore glowing in the low sun. I then kicked back to eat dinner, some cold burgers I had brought from town. Two park rangers came by and were talking to me about my kayak and were stunned to find out that I was trying to retrace the whole Lewis and Clark Trail.

I got the last actual shower I’ll have for a week or two, then filled up all of my water containers. In the morning I plan to load my kayak and head west.

Thanks again to Chuck who did me a huge favor, including receiving my kayaking gear for me.

27th August Monday 1804 This morning the Star Calld. the morning Star much larger than Common G. Drewyer Came up and informed that he Could neither find Shannon nor horses, we Sent Shields & J Fields, back to hunt Shannon & the horses…

28th August Tuesday, 1804…The wind blew hard this after noon from the South—J. Shields & J. Fields who was Sent back to look for Shannon & the Horses joined us & informed that Shannon had the horses a head and that they Could not over take him This man not being a first rate Hunter, we deturmined to Send one man in pursute of him with Some Provisions…

29th August Wednesday 1804…about 70 Soues arrived on the opposit Side of the river we Sent over for them…we Sent over Serjt. Pryor with young Mr. Durion, Six Kettles for the Indians to Cook the meat they Killed on the way from their Camp (2 Elk & 6 Deer) a bout a bucket of Corn & 2 twists of Tobacco to Smoke intending to Speak to them tomorrow—G. Drewyer Killed a Deer-. Sergt. Pryor informs that when he approached the Indian Camp they Came to meet them Supposeing Cap Lewis or my Self to be of the party intending to take us in a roabe to their Camp-he approached the Camp which was handsum made of Buffalow Skins Painted different Colour, their Camps formed of a Conic form Containing about 12 or 15 persons each and 40 in number, on the River Jacque of 100 yds wide & Deep Containing but little wood, They had a fat dog Cooked as a feest;