It is been a great camp spot with my tent nicely protected from the wind by the thick cedar tree. The wind was blowing though and the waves rolling onto the nearby shore.

I looked at the map once more. Portaging Little Bend made perfect sense.  I would soon be stopped by wind and waves after the portage, so I was in no particular hurry to pack up. It was nice to laze. around a little bit in the morning. Despite that I was packed and ready to go by 8 AM.

I took a pack load of heavy stuff to scout the route over to the other side. Usually when I look at a map and find what looks to be a route following a series of gentle ridges, I find that there is some rough going that I hadn’t anticipated, things like little gullies and brush that don’t show on the map. I was delighted therefore to find a route up a gentle, slightly meandering ridge clear to the top.  But what about the other side? It was only maybe 300 yards to the water and I followed a drainage down and dropped my pack. There’d been some brush but not bad.

I scouted out a ridge next to the gully. It was brush free with only a very short steep spot. At the top of the ridge I noticed my phone had coverage so I posted yesterday’s journal update and downloaded the weather. It looked like I would be having some wind days.

The kayak towed pretty well on the cart, the key was avoiding the high grass and any low brush. It was remarkable luck to find such a good route right where I wanted it. The other side was steeper so I turned the kayak around and let gravity pull it down the hill. At the steep spot I was just especially careful. When it flattened out I turned the boat around and pulled it to the beach. Now, it took considerably more effort than if it had been a paved road, but it was an absolute piece of cake compared to packing everything over by hand. 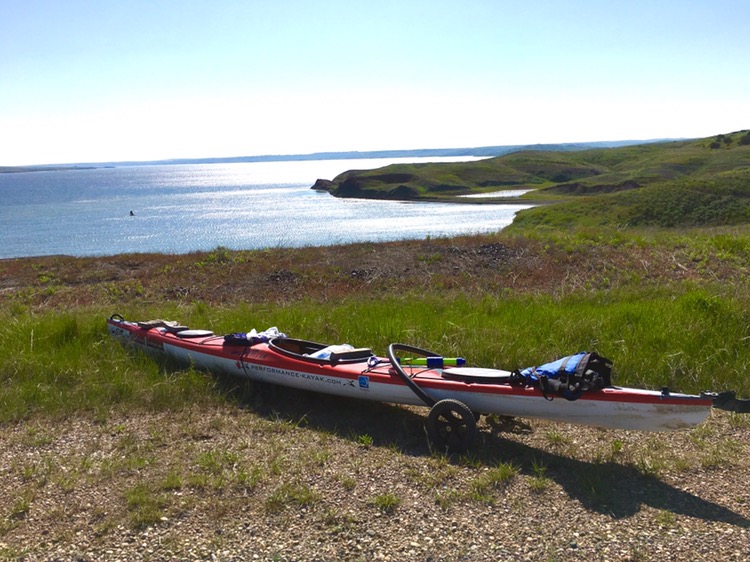 I broke down the cart and packed the boat once again. I was going pretty much into the wind but I still had a little protection from the peninsula in places. The hard part was crossing little bays. But then I got to the big bay, maybe 2 miles long with the wind blowing right down it, creating whitecaps. There was no way I was going to try to paddle across that with big waves hitting me sideways. I planned to paddle up the bay until I got to a point where I could safely cross.

I couldn’t even turn the corner without getting big waves. There was a gravelly looking beach though that would take me around the corner for about a half a mile. I was loathe to partially unpack the boat and put the cart back together again but that’s what I did. I soon found that this gravel was awfully loose so the cart tires wanted to sink in enough to make the pulling much harder.

I hiked down to the next big point, maybe a half a mile down, and climbed the bluff to see if any of this made sense. I sat down among some windblown yellow wildflowers and looked at the white caps blowing down the bay. Usually I’m pretty decisive but I kept changing my mind. I hated to quit so early, I hated even more taking any chances. I decided I would go as far is it felt safe. With the boat finally pulled down to where the waves diminished, I got in and paddled around the first point. And that was the confusing part, there were bays within the bay  with different winds. Headwinds, side winds, brief tailwinds, waves from almost nothing to impressive. Near the head of the bay I made a short foray to see if I could cross yet.  I didn’t get far before I turned around and sprinted back to hug the shore.

After a long struggle I made it to the head of the bay, turned the corner and began paddling downwind. It might seem like the perfect thing to have a strong tailwind, and it was to a point. I was paddling hard to try to keep up with the waves and for the rudder to get a bite in the water. If I wasn’t going 10 miles an hour it was mighty close. I really don’t like big waves chasing me though, not even near the shore. I was watching for rocks lurking near the surface and keeping an eye on how the waves looked rounding that first big point. They didn’t look good. I found a little cove and swung over to land the boat. It was another surf landing and like all surf landings I got wet getting out of the boat.

At the top of the next big point I looked around. The wind was getting ridiculous. Time to camp. There was a good spot, no trees or brush to protect me but the terrain did a good job.

I had just struggled for maybe three hours for little or no forward progress as I was still a considerable distance down the side bay. Still, with the mileage I had saved with the portage and the miles I paddled before my side bay fiasco, I must’ve made nearly 16 miles forward progress, not too shabby on a windy day.

The silver lining was that I now had several hours to simply goof off. I grabbed a book and hiked up the hill to a place out of the wind, under the shade of a nice cedar tree. Colter

Clark 27th of Septr. Thursday 1804 I rose early aftr a bad nights Sleep…the man who Steered not being much acustomed to Steer, passed the bow of the boat & peroge Came broad Side against the Cable & broke it…the bank was lined with men armed the 1st Cheif at their head, about 200 men appeared and after about 1/2 hour returned all but about 60 men who Continued on the bank all night, the Cheifs Contd. all night with us—This allarm I as well as Captn. Lewis Considered as the Signal of their intentions (which was to Stop our proceeding on our journey and if Possible rob us) we were on our Guard all night, the misfortune of the loss of our Anchor obliged us to Lay under a falling bank much exposd. to the accomplishment of their hostile intentions P. C—our Bowman who Cd. Speek Mahar informed us in the night that the Maha Prisoners informed him we were to be Stoped—we Shew as little Sighns of a Knowledge of their intentions as possible all prepared on board for any thing which might hapen, we kept a Strong guard all night in the boat no Sleep

Clark…28th of September…Made many attemps in different ways to find our Anchor but could not, the Sand had Covered it…with great difficuelty got the Chiefs out of our boat, and when we was about Setting out the Class Called the Soldiers took possession of the Cable the 1 s Chief which was Still on board & intended to go a Short distance up with us, I told him the men of his nation Set on the Cable, he went out & told Capt Lewis who was at the bow the men who Set on the Roap was Soldiers and wanted Tobacco Capt. L. Said would not agree to be forced into any thing the 2d Chief Demanded a flag & Tobacco which we refusd. to Give Stateing proper reasons to them for it after much difucelty-which had nearly reduced us to hostility…I am Verry unwelle for want of Sleep
Trip overview and route map with position updates:

Congratulations on the Successful portage of both Big and Little Bends. You certainly provide a good example of an efficient gear load for the trip at hand. Many people carry so much shit they would never be able to accomplish such portages. Tough luck with the wind but thats Oahe. So frustrating to be stuck on shore in such a treeless environment. Hopefully the temps are moderate and not hot. As you have done before, going back to night paddling might be an alternative. Good luck, stay safe, watch out for cattle along the shore showing up in the middle… Read more »

Thanks Allen! It’s seemed to stay windy at night recently but I might see if I can do a very early launch tomorrow to get in a few miles. Did you have any trouble getting into Mobridge mudflat-wise?

I had plenty of water around Mobridge but I went through mid-July so no issues with mudflats. No idea about water levels during late May/early June. A good lay over place at Bridge City Marina, just before Mobridge. Mike Norder is an incredible host. There is laundry. Showers up the hill at the rec area park. I walked into town because they were quite busy at the marine with paying customers but Mike offered a ride in/out if I needed one. Only snacks at the marine store. No restaurant but they fed me anyway. Very nice people. Mike is generous… Read more »

Good info as always, Allen. Thanks!