I had the alarm set for 5 AM and woke up a few minutes earlier like I often do when I have an alarm set.

Down at the water the wind was blowing and there were some waves but nothing like yesterday. I’d give it a whirl, shooting for Bush’s Landing, where the guidebook reported a restaurant and convenience store, a half-mile walk away, both would be handy if I got windbound for three days.

I was paddling before 6 and rounding that first point was a piece of cake. There was a fairly stiff headwind however when I got out to the main channel. There were also stretches though where the paddling was easy. My camp had been less than 3 miles from the landing to begin with so if I could do it safely I would get there with no problem, headwind or no. Just about 7 I spotted the landing.  It was predicted to get windier as the day progressed. This was a good place to ride out the high winds in the next two or three days.

I found a campsite protected from the prevailing south and southeast wind by a flat bottomed ravine. I set up my Lunar Solo on a nice flat spot in the grass. Getting a nice pitch is a bit of an art and I was pleased with the result, taut and symmetrical. I carried all my gear up to camp including the boat, out of sight from the landing and from the lake is well.
After organizing my belongings I got in the tent and read while using the solar charger to charge up my phone. It was a pleasant spot.

About noon I decided to check out the store and restaurant. I began walking down the deserted road.  There was a sign I found amusing: “Caution: Lake 1 Mile.” It seems unlikely someone would go driving down the road at high-speed negotiating a couple of tight corners and somehow fail to notice the boat ramp and lake in front of them!

The sign had it right in one way, it was a lot farther than a half mile to the convenience store and restaurant, more like a mile and a half. But I got there I considered it a bad sign that there was a chain across the driveway and tall grass everywhere. Oh well.

A guy with a boat trailer was just pulling into the yard of the house across the street. I walked over there.

“Looks like this restaurant and store has been closed for a while. Is there anything else nearby?”

He looked at me strangely. “What?”

“Is there some place nearby that sells food?”

“The resort down there.” He gestured with his head to a place maybe 1 1/2 more miles away.

“OK, thanks.” That was weird. I’m not sure if he couldn’t hear me or exactly what was going on. Not a trace of friendliness in his voice or mannerisms.

I’d only walked a few hundred yards when another pickup towing a boat slowed as it approached from behind me.

“Did you break down?”

“Where are you headed?”

I explained. He dropped me at the store wishing me well.

The lady running the place was on the phone. She was trying to help someone figure out something about a guy in a pickup and about somebody else. We finally realized the person was talking about me and the guy who just dropped me off.

It turned out the guy I talked to on top of the hill had called the cops. Apparently I was suspicious. I must have been the guy he saw dumpster diving at the landing a few hours ago. Dumpster diving?  I thought back to a pickup that had driven around the loop as I dumped my trash. Noticing the wind was swirling my light trash around I went to the other side and shut the dumpster lid to keep all the garbage from blowing away.   In his suspicious mind the answer wasn’t what I was actually doing, but rather that I had just crawled out of the dumpster and was reclosing the lid.

I explained to the lady who I was and what I was doing and she called the police and told them they could skip the check. She turned out to be Tammy Nelson, one of the owners of West Prairie Resort. She was the opposite of the fellow who had called the police on me, nice and friendly and interested in my journey.

The grill was already closed but I heated up a sandwich and had a cold Dr Pepper and used their Wi-Fi. It was a pleasant break and I chatted with Tammy as she worked around the place.

When I left to start the 3 mile hike back to camp I started flushing pheasant after pheasant, 15 perhaps. Apparently it was a common occurrence because every other electric pole or so had a little sign that said “no pass shooting within 30 feet of the electric line.”

I took a break before I got back to camp to take advantage of the nice shade of some trees. For the first time on this trip there were numerous mosquitoes. I have a high tolerance for mosquitoes and since only my hands and face were exposed they didn’t bother me much.

When I was walking the beach back to the tent I looked down and found a shell fossilized in a stone. I’ve been watching for fossils in the stone because much of it is fossilized mud. 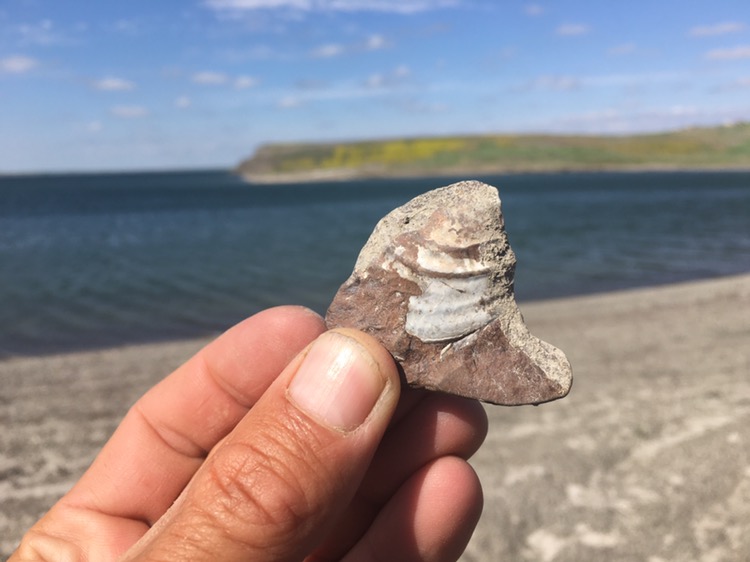 I read the local paper I bought in Pierre and even managed to complete the crossword puzzle, the Jumble and Sudoku. I must of gotten the grade-school versions.

I only managed to paddle less than a handful of miles this morning and although I walked maybe 5 miles it didn’t buy  me any forward progress. Yet with these winds it was smart taking the rest of today off. I’ll certainly be taking all of tomorrow off as well as it’s predicted to be “windy.” If it’s windy in the Dakotas, that means real wind! I heard the weather report say the winds were up to 33 miles an hour today. I’d been told 15 miles an hour might be a good good cut off. I agree. I have found that sustained winds of 15 miles an hour across a long stretch of open water is as much as I want to paddle in as the waves get to be too much. Colter

Clark: 29th of September…the 2d Chief with 2 men and Squars on Shore, they wished to go up with us as far as the other part of their band… told them we Should not Speake to another teton except the one on board with us…the Chief requested that the Perogue might put him across the river which we agreed to—Saw numbers of Elk on the Sand bars today, passed an old Ricara Village at the mouth of a Creek without timber we Stayed all night on the Side of a sand bar 1/ 2 a Mile from the Shore.

geez Buck, you really know how to draw the cops in. You must be a really shady looking character, lol. As you are finding out, the guidebook is somewhat out-of-date in some aspects. You will find that “resorts” have closed or changed hands due to droughts and financial events. Go with the flow and don’t bank on what you read.