When I woke up I could hear what I already knew, I wasn’t going anywhere today. As a matter fact today was likely to be the windiest day of the trip,  at least of my paddling days.

I did some reading and worked on my journal entry for the day. One thing I hadn’t realized is that Clark did most of the daily journaling for the Corp of Discovery. With all the journal entries I have been reading to date, Clark has usually written two slightly different versions.  One presumably is the version he sent back with returning boats.  The second version Clark wrote was almost always longer,  including details that he had apparently thought of after he had completed the first version. Lewis’s entries are almost always scientifically dense, and far less common. It must’ve been an incredible effort for Clark to sit down at the end of the day, no matter how difficult and stressful, and write, in longhand, not one but two detailed versions of the day’s events. I find it an effort to write a single account in which I don’t have to include carefully researched and recorded details such as latitude and longitude.

Around 1030 I decided to make the 6 mile round-trip walk to the lodge. It was a worthwhile effort in several respects: I could get a good hot meal and extend my food supply for these windy days, I could get coverage to post my journal entry, and the walking would help keep me in hiking shape, because once I get to Three Forks I will have about 500 miles of hiking before I can get back on a river again.

I must’ve flushed close to 40 pheasants. I’ve never seen anything like it in my life. They are magnificent birds.

At the lodge I got a bacon cheeseburger and fries, posted my journal entry, and charged up my phone.

There is a fish cleaning station about 2 miles from the boat landing and a mile from the lodge. I stopped there to fill up a couple of water bottles from a hydrant. Some fishermen were cleaning their catch including a bass far bigger than any I’ve ever caught in my entire life.

“How are the waves out there today?” I asked. 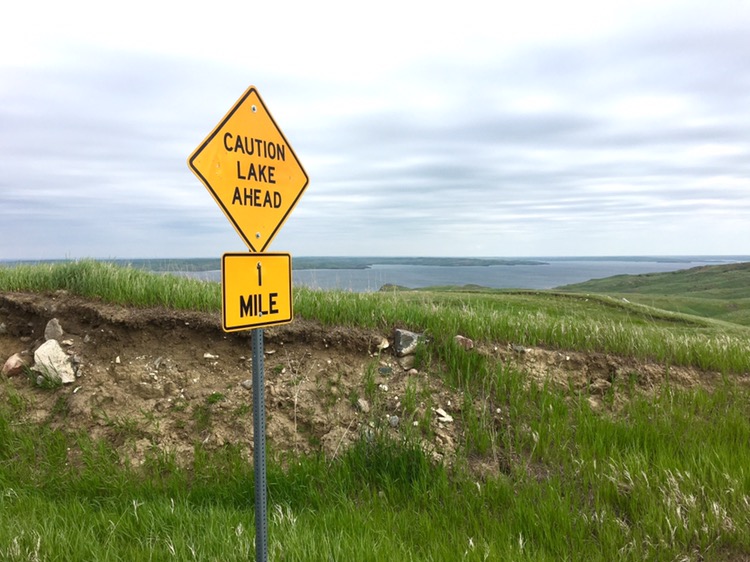 Don’t drive into the lake

When I got to my tent I rigged up a sunshade for it, using my sleeping bag and my warm weather sleeping sheet. It’s amazing the greenhouse effect in a tent, even when the sun is barely visible through the clouds, and especially in full sun when it can become unbearable. I almost always look for a shady spot but nothing fit the bill here. The sunshade made a big difference.
In the evening, during wind lulls,  it was amazing how many rooster pheasants were crowing, including some very near my tent. Just for fun I counted: on average one crowed every three seconds. Deer, both white tail and mule deer, are plentiful around here as well.

As it began to get dark I could hear some kind of insects swarming outside my tent. It sounded like a movie special effect. At the same time dozens of beetles appeared, crawling on my tent netting. A couple found holes that mice had chewed in my tent at one infamous camping spot on the Pacific Crest Trail in WA.  Those darn mice had chewed at least a dozen netting holes and I thought I had gotten all of them repaired, but apparently not. I stuffed toilet paper in the holes until I could repair them tomorrow morning. Some people get by with no bug netting and using bug repellent.  I’m not one of them.

I got a lot of reading and resting done today. Since there was no real question about paddling in the crazy wind it was an easy choice and not particularly frustrating. The weather radio said the highest gusts were nearly 40 miles an hour. Colter

Clark: 30th of Septr. Sunday 1804… observed a large band of Indians the Same which I had before Seen on the hills incamping on the bank…cast the ancher opposit their Lodgs. at about 100 yards distand, and informed the Indians which we found to be a part of the Band we had before Seen, that took them by the hand and Sent to each Chief a Carrot of tobacco, as we had been treated badly by Some of the band below, after Staying 2 days for them, we Could not delay any time…we proceeded on under a verry Stiff Breeze from the S., the Stern of the boat got fast on a log and the boat turned & was verry near filling before we got her righted, the waves being verry high, The Chief on board was So fritined at the motion of the boat which in its rocking caused Several loose articles to fall on the Deck from the lockers, he ran off and hid himself, we landed he got his gun and informed us he wished to return…verrey Cold evening, all on our guard
Clark: 1st of October Monday 1804… Camped on a Sand bar, opposit a Tradeing house, where a Mr. Valles & 2 men had Some fiew goods to trade with the Sioux, a boy came to us, This Mr. Vallie informed us he wintered last winter 300 Legus up the Chyemne River…he Sais…Some parts retain Snow all Summer, Covered with timber principally pine, Great number of goats and a kind of anamal with verry large horns about the Size of a Small Elk, White Bear no bever on the chien great numbers in the mountains, The Chyenne Nation has about 300 Lodges hunt the Buffalow, Steel horses from the Spanish Settlements, which they doe in 1 month…

not many trees along the east shore until you get up north to State Line. Can’t say about the west side since I didn’t paddle over there much. Hope the wind dies down some for you. Very frustrating to be stuck on shore….