Last night my spoon was missing, which was a bummer because a spoon is nice to have when that’s what I eat with! This morning as I was pushing off the kayak I noticed my spoon in about 6 inches of water. It was super fun to find it, somehow it worked it’s way out of the pocket I always carry it in.

It was a nice sunny day. I launched just as the sun was coming up.  It’s fun paddling near shore where you can see the world slide by. It seems like there wouldn’t be much erosion along a reservoir like this but there was a tremendous amount of erosion today, with bluffs being washed away by wave action. Erosion has exposed many interesting things like coal, petrified wood in the like.

During the midday the wind came up pretty good but it was still paddleable. I don’t believe I had headwinds at all today, it was all tailwinds or side winds. The water was rough enough for quite a while to require the spray skirt but I made good miles.

At one stop I saw some of the type of rock that’s composed of layered mud and that’s the kind of place fossils often appear. I looked around for a while until I spotted a nice leaf print. 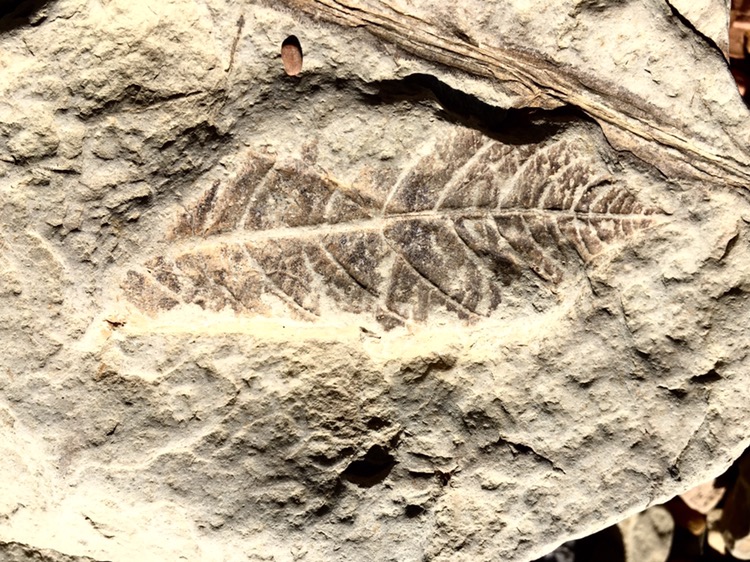 I ended up finding dozens more, including plant stems and other plant debris and leaves of various shapes including some that were nearly round. In one place I found a layered stone and started peeling it apart and almost all the layers had numerous impressions of ancient plants. It is absolutely fascinating to me to think of that ancient forest that no one ever saw and will never see, and yet now I’m seeing pictures of tiny parts of how it looked, millions and millions of years later.
There were huge pieces of ancient petrified trees that must have weighed many tons. 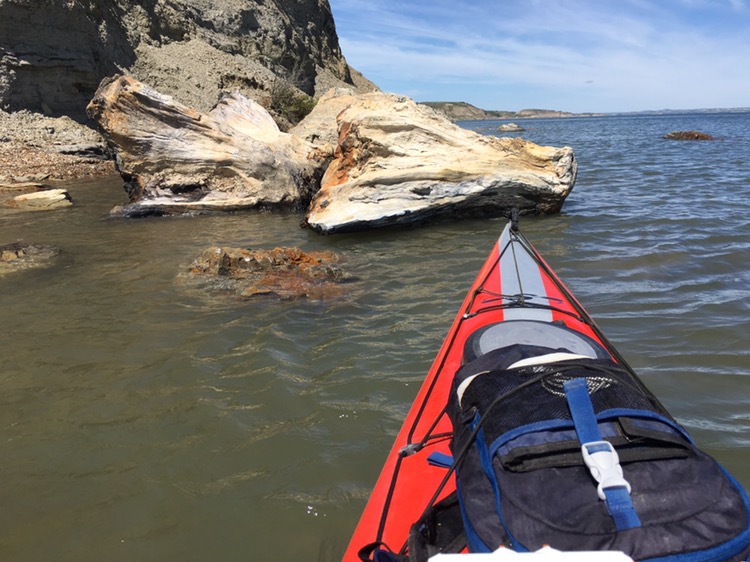 I found what presumably was a fossilized, very fast growing tree, below. If anyone has any other theories let me know in the comments. It certainly looks like wide tree rings to me. 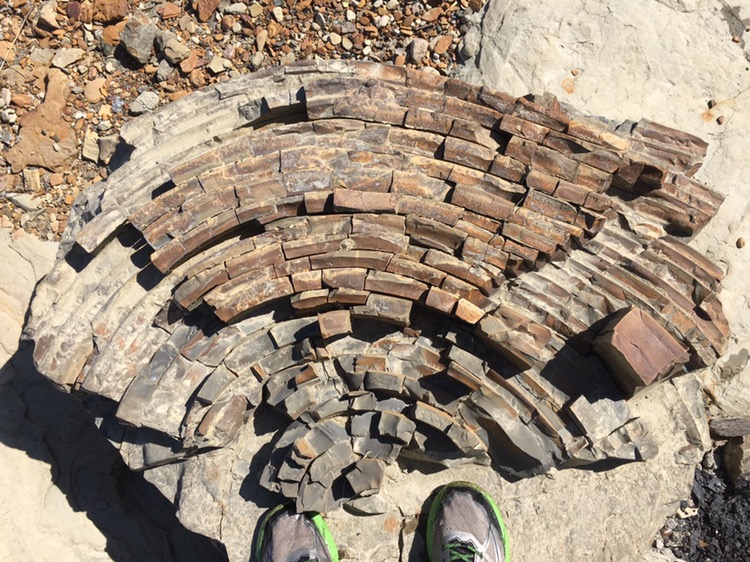 There were also boulders with ripples turned to stone. I really enjoyed finding looking for interesting things during my breaks and while near shore.

About a week ago the goose goslings made their appearance and today the whitetail fawns.  A little spotted fawn was playing a game where he would let his mother get ahead of him and then he would run as fast as he could to catch up, waving his little white tail. With all the coyotes around it’s a skill he will need to use for real.

I passed a small island that must’ve had 200 nesting terns on it. It was a tremendous racket as they all flew up and began circling me. Fortunately they soon dropped behind.

Late in the day when I started paddling again after a break I suddenly had a sore spot on my right arm, maybe the Extensor Carpi Radialis Brevis muscle?  Anyway I had done about 30 miles already and decided to knock off early. I will work on paddling grips and motions that don’t aggravate that spot tomorrow and see what happens.

Shortly before I stopped I saw the first oil well. I’ve got a very nice wind protected, hidden spot here. I was going to camp a quarter-mile earlier but there was a bald eagle nest there. I didn’t have coverage most of the day so I was delighted to have good coverage this evening to post my journal entry. Colter

Lewis: Wednesday April 10th 1805… The country on both sides of the missouri from the tops of the river hills, is one continued level fertile plain as far as the eye can reach… the bluff is now on fire and throws out considerable quantities of smoke which has a strong sulphurious smell. the appearance of the coal in the blufs continues as yesterday… we overtook three french hunters who had set out a few days before us with a view of traping beaver; they had taken 12 since they left Fort Mandan. these people avail themselves of the protection which our numbers will enable us to give them against the Assinniboins who sometimes hunt on the Missouri and intend ascending with us as far as the mouth of the Yellow stone river

Lewis: Thursday April 11th… Capt Clark and Drewyer joined us; the latter had killed, and brought with him a deer which was at this moment excepable as we had had no fresh meat for several days. the country from fort Mandan to this place is so constantly hunted by the Minetaries that there is but little game we halted at two P.M. and made a comfortable dinner on a venison stake and beavers tales with the bisquit which got wet on the 8th inst. by the accidant of the canoe filling with water…

Lewis: Friday April the 12th 1805. Set out at an early hour. our peroge and the Canoes passed over to the Lard side in order to avoid a bank which was rappidly falling in on the Stard. the red perogue contrary to my expectation or wish passed under this bank by means of her toe line where I expected expected to have seen her carried under every instant. I did not discover that she was about to make this attempt untill it was too late for the men to reembark, and retreating is more dangerous than proceeding in such cases; they therefore continued their passage up this bank, and much to my satisfaction arrived safe above it. this cost me some moments of uneasiness, her cargo was of much importance to us in our present advanced situation—

The Extensor Carpi Radialis Brevis muscle is on top of your forearm, and raises the back of your hand and turns your hand towards your thumb. Is that the muscle which is hurting? I suspect that either (a) you’re making some motion with your wrist with each paddle stroke which is overworking that muscle, or (b) in order to grasp your straight-shaft paddle, you have to turn your hand towards your thumb, which is stressing out that muscle. I’d have to see you paddling to decide if you’re making some undesirable motion which is stressing out the muscle. But my… Read more »

Thanks Peter! I would say the spot that is hurting is not the main muscle that raises the back of the hand so I might have the wrong muscle. The pain is on top of my right arm, about 3″ above my wrist, on top of the left, inside bone.

The spot gets tweaked at the end of my left side paddle.

It doesn’t seem to get tweaked when I hold my paddle in front of me.

I’ll work on modifying my stroke to alleviate the pain.

Thanks for the advice!

Your basic problem is that you’re paddling long miles, thousands of paddle strokes, day after day, and are developing an overuse injury. But I think that a straight shaft paddle puts more stress on the muscle on top of the inside bone on your forearm, because a straight shaft paddle requires you to turn your wrist towards your thumb, so switching to a bent shaft paddle may help the problem. Stellar doesn’t make any bent shaft paddles. For examples of good bent shaft low angle touring paddles, check out the Werner Paddle web site, particularly the Kalliste and Canano models.… Read more »

If you’re pulling your elbows back with each paddle stroke, that would put an extra sideways twist into your right wrist at the end of each left paddle stroke, which is when the muscle on top of the inside bone on your forearm is getting tweaked. Try leaving your arms relatively straight when paddling, swing both arms and your paddle as a unit, and drive your paddle strokes with upper body rotation. Avoid a “bicycle pedal” motion of your arms when paddling, which works your arm muscles harder.

Sound advice I think, thanks!

Thanks Peter. A loose grip seems to help. I think the twisting is definitely an issue. I minimized twisting today, did a pretty big day, and it felt a lot better