I was the only one wheeling a kayak down the road before sunrise in the campground this morning. Many whitetail deer were stunned at the sight.

There was no morning calm as I’d hoped, the wind was blowing pretty good. The map showed that I could reach a protected bay in a mile of paddling. I launched the boat and when I got a look at the waves I went back and put on the spray skirt. I paddled in the biggest waves yet because it was a safe opportunity to do so, paddling out of the marina like that. Straight into the waves it wasn’t too bad but I wouldn’t care to paddle bigger waves and I wouldn’t care to paddle all by myself on bigger water with waves like that.

I was shooting for a gap in a peninsula. On the lee side the waves were quite mellow but when I went through the gap the water was too rough, as I expected. I turned around and slipped back through the gap and landed the kayak in a nice little sunny cove protected from the wind.

It was a very pleasant spot to hang out. On the beach were many pieces of petrified wood. Some looked almost as if a carpenter had been sawing up one 1×6’s and left his scraps on the beach.  Others were much bigger, maybe 200 pounds or more.

I set up my solar charger which I always enjoy. Free power! I climbed up a grassy hill from time to time to hang out and look out over the lake to see how the waves were. They were high. When I first got there it was still only about 7 o’clock, so later lying in the warm morning sun felt good. As the day progressed I lay in the shade of an ash tree. The only downside were plentiful wood ticks.

About 2:30 I noticed the wind slackening. When I climbed the hill there were few whitecaps left. I launched the boat to see how it would go. There were still some decent waves, but the wind was much lighter and the water slowly calmed. After a while the wind died away almost completely. It took a surprisingly long time for the waves to diminish, but when they did I really enjoyed cruising along without fighting wind or current. I haven’t had such good paddling in a week or so.

There were some steep bluffs and interesting rocks and boulders. There was lots of coal and coal seams as well.

One boulder in particular, perhaps 5 feet long, had a design on it that looked as if it of been carved by Mayans. 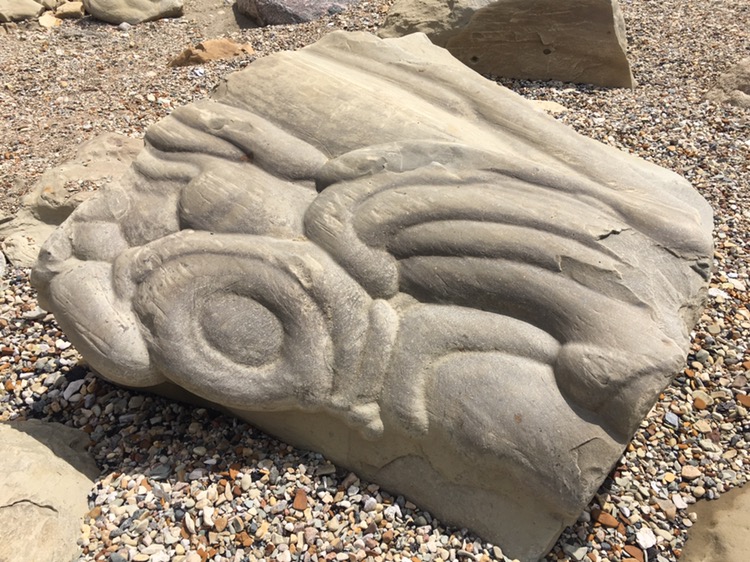 I also saw boulders that had been scratched as they were pushed by glaciers. On one stretch of beach were several petrified stumps! 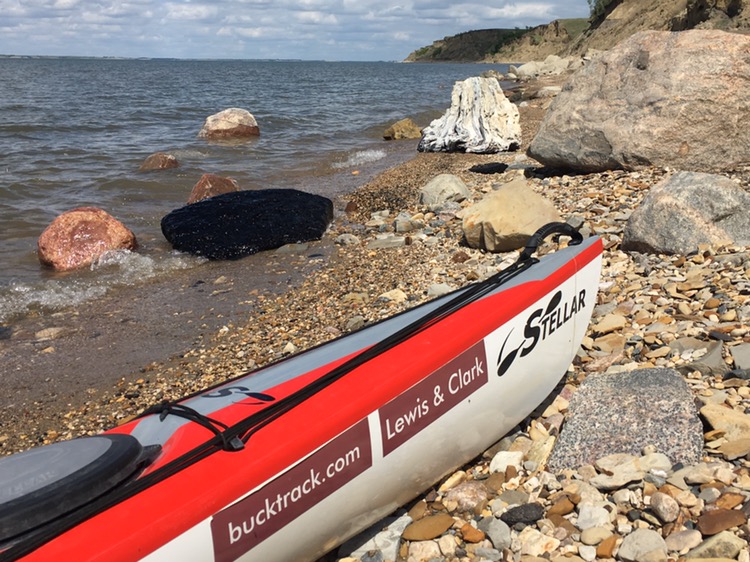 I was able to beeline across side bays which saved miles of paddling. At about 8:30 PM I looked ahead and could see steep bluffs for two or three more miles. With a good landing spot right in front of me I took the opportunity to camp. Although I prefer camping in the trees or in well protected spots the winds should be light this evening so I’m camping on a fairly open gravelly spot. I think I did over 20 miles in that very short paddling day. Colter

Lewis: April 9, 1805: …the Indian man who had promised us to accompany us as far as the Snake Indians, now informed us of his intention to relinquish the journey…the Bluffs of the river which we passed today were upwards of a hundred feet high…many horizontal stratas of carbonated wood, having every appearance of pitcoal…squaw busied herself in serching for the wild artichokes which the mice collect and deposit in large hoards. this operation she performed by penetrating the earth with a sharp stick about some small collections of drift wood. her labour soon proved successful…
Trip overview and route map with position updates: