Last evening after I wrote my journal entry the wind calmed to a very placid evening. Except where the current swirled, the river slid past smoothly, hardly recognizable from the way it had been earlier in the day.

Just before sunset I heard some splashing that sounded like an animal walking nearby. When I heard it again I was wondering what animal would be so bold as to walk right past my tent. When I opened the tent flap to look out I saw it was five deer playing at the edge of the water across the river. It was so quiet and calm it sounded like they were just outside my tent!

With what has become nearly routine, a strong headwind predicted, I planned to get up at 4 AM to take advantage of the morning calm, if there was one.

I got a break, it was calm and I was paddling by about 5 AM. When I had visited the Knife River Village the river had come up a foot or more. This morning the river had receded 20 feet farther away, meaning it actually fell perhaps 2 feet, all due to the release levels of water from Garrison Dam, no doubt. 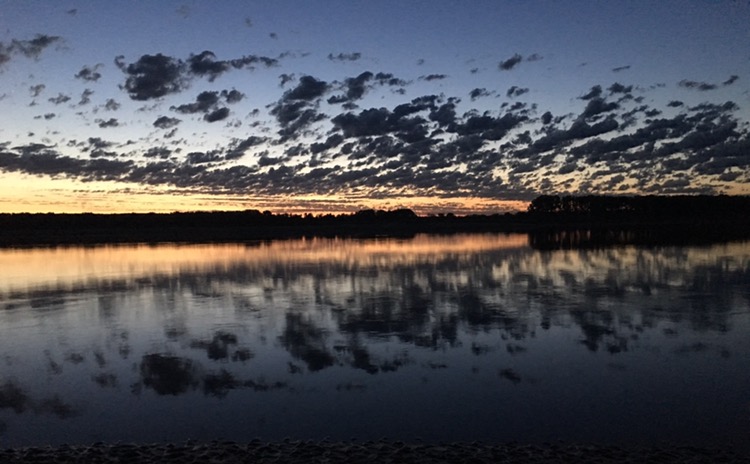 I had been fighting to make progress on this stretch yesterday and now I paddled smoothly up the river. Without the wind I found it was dramatically easier to read the current and find easier paddling.

Because I expected the wind to arise at any time I kept at it, paddling steadily.

After nearly 2 hours I came to a side channel that every boat on the river decided was THE spot to fish. There were at least four boats in one small spot. But what really caught my attention is that at the end of the channel I could see the dam.

“Will this take me to the boat launch?” I asked one fellow.

“Nope. Say, you’re paddling upstream? You must be one tough son-of-a-$&@?! to paddle up this river.” He explained that this side channel had washed out in 2011.

When I rounded the corner the wind was coming up and there I was more current. The last 2 miles seemed to take a long time. I had planned to take out on the east shore but the guidebook showed a take-out on the left shore, near the tailrace. The latter option was a shorter portage so I decided to go that route. When I made the paddle up there however, what apparently was the put-in/takeout was now riprap. I gave up a quarter mile of hard paddling to get to the boat ramp on the other shore,  but it was fun going downstream!

There was a nice gravelly spot to take out, out of the way of the numerous powerboaters. Quite a few people asked me what I was up to.

Once I got the boat repacked with the weight towards the back and the cart all set up, wheeling the boat down the paved road was remarkably easy. I pulled the boat up a long incline, all the way to the top of the dam, and then up another hill to get to the put-in.

It was only a few hundred yards past the turn-off to the put-in to get to Pick City, so I wheeled my boat right to the grocery store. There are going to be a lot of chiropractors busy next week because people about twisted their heads off watching the guy pulling the kayak down the road. I have been the center of attention for the last 2+ months. First, because I was walking down the road with a backpack, which is apparently a strange thing to do, and now because paddling upriver is a crazy thing to do, or wheeling my kayak down the road is a wacky thing to do. I guess it’s just part of the experience, but not my favorite part.

The little grocery store had plenty of supplies. I’d wheeled my boat right past the motel so I gave them a call.  I haven’t slept in a bed in a month so I thought it would be a good change. No one answered the phone,  however.

I went across the street to the bar and grill to get a hot meal. It was supposed open at noon but it was just after noon when someone came walking up the steps, apparently just opening the place. A meal seemed like it might take a while so I went down the street to another bar and grill where I should’ve gone in the first place, because it was hopping. It was packed with locals getting there Sunday lunch. My order was taken promptly and I was served just us promptly.

I wheeled my kayak back up to the intersection and down to the State Park. The young guy running the park entrance was very helpful. The wind was blowing hard now and predicted to blow through the end of the day, towards the south too, the wrong direction for me, so I was going to camp and get a good hot shower. I asked for a nice shaded spot. A young ranger lady walked in and together they picked the best spot they had. The bad news: it was about a mile out of my way, adding 2 miles to the portage total, which is significant.

It’s a nice spot however and although there were many people here when I arrived the place has almost completely cleared out this Sunday evening.

The shower house unfortunately had very cold water. Hot water was a luxury I was looking forward to. I looked at the map, located another shower house, and yessir, hot water!  I got all nice and cleaned up then took my clothes and gave them a good washing with detergent in the sink.

I hung everything out to dry at my campsite. In the very warm sun and very breezy breeze it didn’t take long to dry everything.

My daily mileage has taken a beating in the last week or so and tomorrow will almost certainly be another low mileage day. I’ll get an early start though and see what happens. I’ve gained a year on Lewis and Clark so far, so I guess I’m not doing too bad. 🙂

I keep expecting to lose cell/internet, and have been told I will for sure between here and Williston, so I may be out of touch a few days. Colter

Lewis: April 8, 1805 Set out early this morning, the wind blew hard against us from the N. W. we therefore traveled very slowly. I walked on shore… by land about four miles where I wated the arrival of the party, at 12 Oclock they came up and informed me that one of the small canoes was behind in distress. Capt Clark returned foud she had filled with water and all her loading wet. we
lost half a bag of hisquit, and about thirty pounds of powder by this accedent; the powder we regard as a serious loss, but we spread it to dry immediately and hope we shall still be enabled to restore the greater part of it. this was the only powder we had which was not perfectly secure from geting wet.

Likely a bit of a dead cell zone for you until New Town where you should be able to at least text. Very good progress you are making. The wind and storms only gets worse later in July so moving through this area now is better. Keep on truck’n. Tobacco Gardens is not far now.

I’m pinned down by wind again but tomorrow and the next day I hope to make some bigger miles. Tobacco Gardens is in my sights!