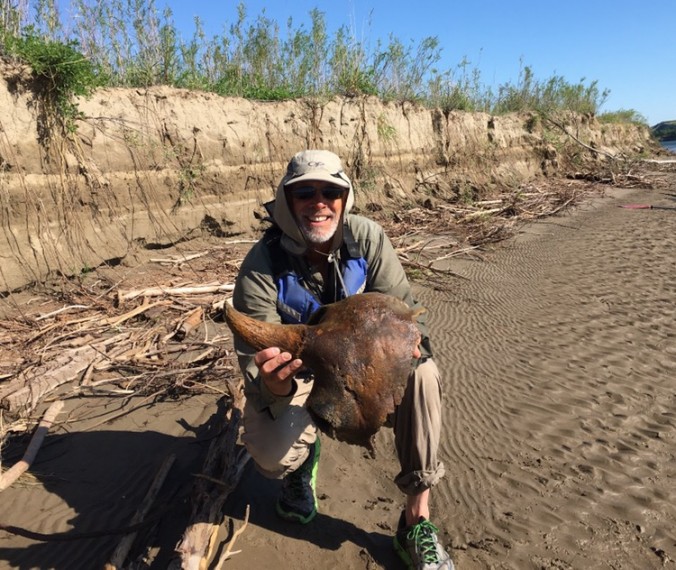 I was paddling at about 5:30 AM, trying to get in some miles before I got slammed by headwinds.  Although I did have a headwind, I was still able to make good progress most of the time.

A magnificent rooster pheasant basked in the sunshine along shore until he lost his nerve and ran into grass. Two whitetail deer watched me approach at the edge of the river next to a 20 foot bluff. They bounded up ledges on the bluff, I was concerned they’d fall and hurt themselves but they made it just fine. Huge white pelicans drifted and paddled in the river. A bald eagle grabbed some food on a gravel bar. A smokey-white hen mallard paddled with her normally plumaged mate. I’ve never seen a wild mallard colored like that before

I paddled past the approximate historical location of Fort Mandan. A short while later I was paddling hard along the riverbank when I saw a large brown skull along the shore. Chuck Mackey had told me that old bison skulls are brown, so I landed the kayak to check it out. When I flipped it over I was thrilled to see it was a buffalo skull!  I always hoped one day I would see a skull along some western river, and today was the day. 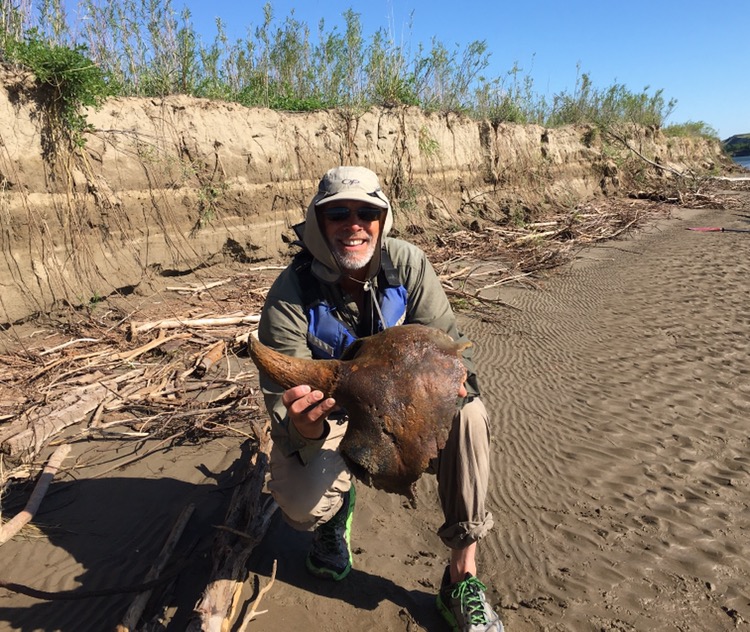 As I continued paddling I watch carefully and started seeing many buffalo bones. I was amazed when I spotted a fragment of the second buffalo skull!  A few feet away I found what looked to be a hammer stone. It appeared to be a natural stone that had been hafted to something and used for hammering, because both ends appeared to be pounded flat. 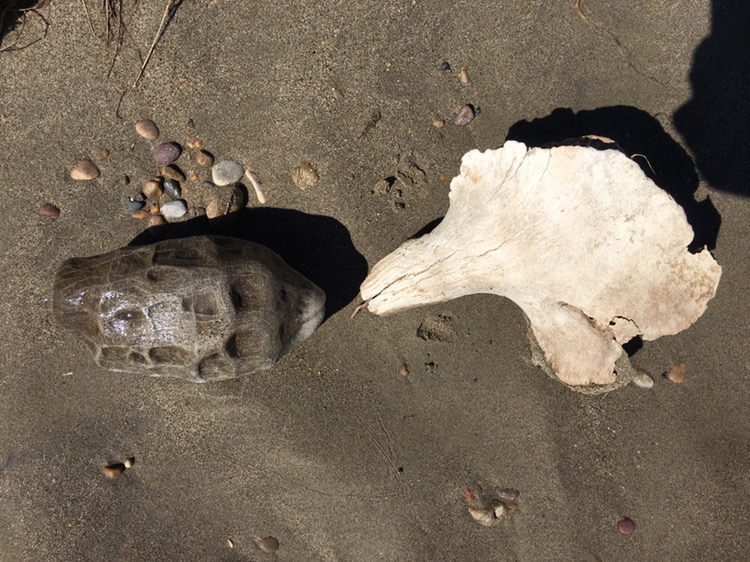 The wind was starting to increase so it was very difficult to make progress. There was apparently a shelf across the river, causing a very narrow rapids running nearly from shore to shore. I was paddling around the end of that rapids, and the current and the headwind together were a serious force to overcome. I had to paddle as hard as I could to make any headway, then find a place to rest, and then paddle again as far as I could make it. Finally I made it to a point where the current lessened.

I crossed the river to try to find slower current. There was still more than enough current there, and wind, but the water was shallow enough to wade so I got out and pulled the boat for away. As I splashed along with my head bowed I looked into the water and saw a third buffalo skull!!! What a day.  I carried it to shore for a photo. There I found a buffalo leg bone and two big pieces of petrified wood all within a few feet! 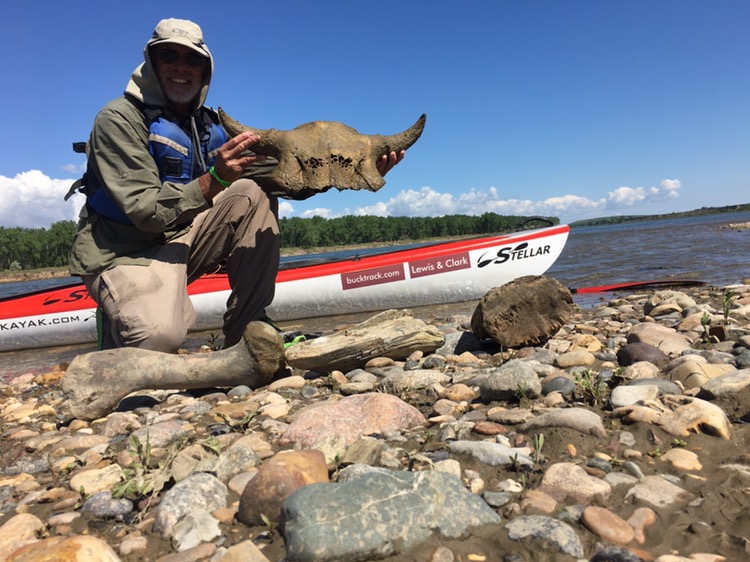 I could not believe it, it was absolutely thrilling.

After many photos I resumed splashing upstream. When the current let up a bit I jumped in the boat and paddled steadily to the other shore where I hugged the bank, looking for the slowest current. When I got to the park services Knife River Indian Village land I landed the kayak, very much tuckered out. The wind was ridiculous at this point.

I dragged my kayak well out of the water tied it off and got something to eat. Taking my small valuables I headed cross-country to find one of the Park Service walking trails. I picked up one of their semi-maintained trails that ran through a beautiful forest of ash and cottonwood and wildflowers. It was green and lush and quiet there, out of the wind.

I spotted open prairie and walked up on top, following it down to the large Hidatsa Village. All that remains are huge dimples in the dirt, like the surface of a giant green golf ball. After walking out to the road I followed it down to another parking area where I picked up a pleasant path following the Knife River to what is believed to be Sacajawea’s old village, or rather the one she lived in after being captured by Hidatsa raiders at the  headwaters of the Missouri in the Rockies.

I walked down to the visitor center and had a long chat with a very knowledgeable park ranger. Outside was a reconstruction of a Hidatsa earthen lodge. It looked very comfortable inside. I was very surprised that in the winter they temporarily abandoned those large beautiful earthen lodges and moved down to much smaller, more temporary ones along the river.

Norman Miller said this would be an interesting stop and he was certainly right.

After seeing the sights I walked back to the kayak having walked 7 miles or so, making it a very big day indeed.

This was the most interesting, thrilling, historical day of the whole trip, as well as being one of the most difficult physically. Colter

Lewis: November 2nd 1804 This morning early we fixed on the site for our fortification which we immediately set about. This place we have named Fort Mandan in honour of our Neighbours.

Clark: 4th November Sunday 1804 Fort Mandan a fine morning we Continued to Cut Down trees and raise our houses, a Mr. Chaubonee, interpeter for the Gross Vintre nation Came to See us, and informed that he came Down with Several Indians from a Hunting expedition up the river, to here what we had told the Indians in Councl this man wished to hire as an interpeter, the wind rose this evining from the East & Clouded up—Great numbers of Indians pass hunting and Some on the return-

Imagine putting those buffalo skulls in your carry-on luggage? Imagine what your spouse would say when you got home with them!

Maybe I’ll put one of those photos on my wall. I really enjoyed finding those skulls.