The winds were light early. I paddled the 2 miles to Fort Mandan fairly quickly.  I wasn’t sure exactly where to land so I tied off my kayak and when I climbed the bank I could see the replica, still upstream a bit.

The fort is actually surprisingly small. That might’ve been an advantage in the extreme cold they experienced that winter!  The reconstructed rooms were set up in a very interesting way. They had, for example, an arms room with a replica of a swivel gun and other weapons, there were many buffalo hides on the bunks, and there was a reconstruction of Lewis and Clark’s room with an idea of some of the personal equipment they had.  There was a blacksmith shop as well. I’m glad I’m not hauling the anvils upstream with me! It was very well done. An important feature of the rooms were fireplaces. A young family did the tour with me and they were very knowledgeable,  including the two kids. 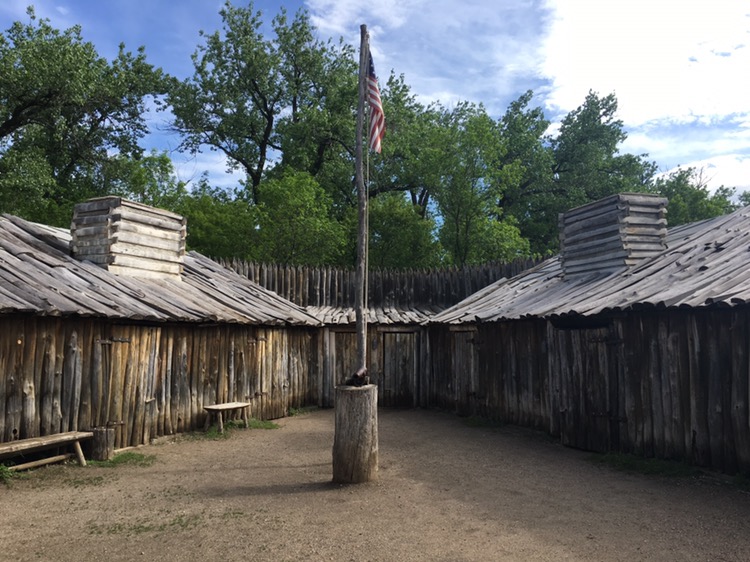 There were two big Angus bulls to maneuver around on my way back to the kayak and a magnificent wild turkey gobbler as well, although the turkey gave me plenty of room on his own.

The wind came up significantly, a head wind. The paddling was no longer easy.  I was still able to make steady progress however, on a river lined with cottonwoods.

Nearby me an enormous fish porpoised. Had I been on the ocean I would’ve assumed that it was a dolphin. It’s skin was smooth and it’s tail forked so I suspect it was a big paddlefish.

There was a long bend where I hoped to use the cottonwoods as a wind break but an endless sandbar pushed me away from the shore and out into the strong winds. Powerful winds blew sand across the dunes that had formed. The blowing sand looked like drifting snow.

Later however, the bend turned south a bit and I actually got something of a push for a mile or so.

When the river turned back north the wind increased and whitecaps appeared. A thunderstorm was sneaking up and began to rumble. It was early but the wind, combined with the current, was just too much to struggle against. I called it a day early. On a positive note I thought it might be difficult to gain as many miles as I did, perhaps 11.

More strong headwinds are predicted over the next three days or so but I’ll sneak in as many miles as I can. Colter

Clark: 25th of October Thursday 1804. a Gentle Breeze from the S. E by E passed an (1) old Village on a high Plain where the Mandans onced lived & after they left the Village & moved higher the Ricaras took possession & live until 1799 when they abandoned it & flew from the just revenge of the Mandans… Several parties of Indians on each Side of the River going up. in view in every directions—we are informed that the Sioux has latterly taken horses from the Big Bellies or Minitaries and on their way homerwards they fell in with the Assinniboins who killed them and took the horses & a frenchman Menard who resided with the Mandan for 20 years past was Killed a fiew days ago on his way from the Britishment astablishments on the Assineboin River, 150 miles N. of this place to the mandans by the assinniboin Indians—we were frequently Called to by parties of Indians & requested to land & talk… Several Indians visit us this evening the Sun of the late great Chief of the Mandans who had 2 of his fingers off and appeared to be pearced in maney places on inquiring the reason, was informed that it was a testimony to their grief for Deceased freinds…

[note: there is no mention of the Fort yet because the replica is thought to be slightly south of the actual location.]