June! Another turning of the calendar on the Lewis and Clark Trail.

Yesterday, the 1st was another windy one, coming straight down the river. The combination of current and wind in that spot was too much as I found out the day before. As much as I wanted to keep paddling I didn’t care to wear myself out struggling to make just a few miles for the day. It would be a wind day.

A day off spent along the river in a tiny tent isn’t exactly like spending a day off in a nice  motel room, but it is physically relaxing. I got in some fine naps. I finished a thick, carefully researched book about the Battle of the Little Big Horn. It was very interesting reading and was related in many ways to this trip. For example, one of the last stops I made was at Fort Abraham Lincoln, which was the fort where Custer was stationed before the battle.

Along with reading and snoozing I worked on modifying the seat of my kayak, adding a little bit of sculpted foam. I touched up my seam sealing job on my tent, it should now be as good as new, and I also did some further repairs on the bug netting, still finding fixes from the great mouse invasion in Washington state on the Pacific Crest Trail.

Today June 2, the wind turned around as predicted although at first it was nearly dead calm. As a matter fact winds were pretty light until the very end but light tailwinds are a far cry from strong headwinds, that’s for sure.

In Washburn I had grocery shopping to do, I wanted to get a good meal at a restaurant, and I also wanted to make sure I could tour the Lewis and Clark interpretive center and pick up my kayak seat back which they were holding for me. To make sure I could get all that stuff done I got up at 4 AM and packed by headlamp. I launched just after 5 AM, by then plenty of light to see already.

I worked on developing my slow current seeking skills. Some stretches of river there didn’t seem to be any slow current, at other times there was very little current. There were Canada goose families along the river again, with their huge Baby Huey fuzzy goslings. Again today there were islands posted with No Trespassing signs signs, put up by the state of North Dakota to protect nesting sites of rare shorebirds.

Near Washburn I saw a fellow with a canoe so I angled over towards him. As I got closer I saw he had long gray whiskers and a canoe full of dry bags. With his sun-faded gear he definitely had the look of a long distance paddler. And it turned out he was in a way, he was a long-distance paddler in training, apparently just out for the day or two, preparing for a long trip on the upper Missouri someday.

At Washburn I landed my kayak downstream of the bridge, at Riverside Park. I locked my kayak to a tree, hidden in the bushes, took my small valuables and headed up the hill. It wasn’t too far to the Lewis and Clark café. When the waitress said that one option was an all-you-can-eat salad bar that was all I needed to hear. I needed to eat some nice fresh salad! I enjoyed that meal immensely.

I next walked to the library to see if they had any used books for sale, and bought Harper Lee’s latest book. When I left I headed basically straight up the hill to the grocery store where I picked up about three more days worth of food.

It was another mile or so walk to the Lewis and Clark Center. When I asked about the seat back they pulled it out from under the desk. Yes!

I’d like to thank Brady at Scheels in Bismarck who apparently drove all the way up here to drop it off. That was really a nice thing to do. I also found a bag of almonds in the package as well! Since they were only receiving the package as a favor, that was above and beyond customer service. Thanks also to Hansel, and David of Stellar Kayaks for sending it.

I toured around the interpretive center and look at the very interesting displays and paintings and artifacts. 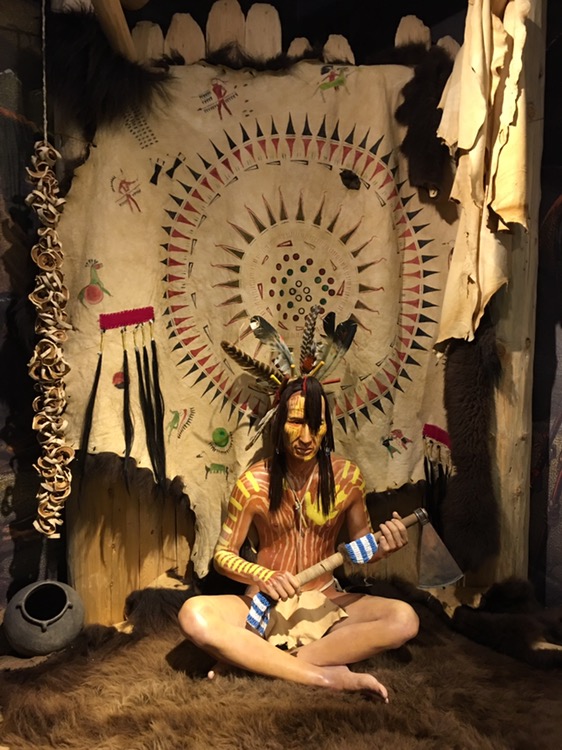 I was going to barely miss being able to tour Fort Mandan. I didn’t want to waste this favorable tailwind but I definitely want to be able to check out Fort Mandan which is so historically important for the Lewis and Clark expedition. So this evening I took the time to install the new kayak seat. In a bit I’m going to walk up the hill for another good meal at the Lewis and Clark Café.

Tomorrow I’ll paddle up and visit Fort Mandan.  Looks like there’s some more wind coming up the next three days, specifically headwinds, but I’ll just roll with the punches and make what mileage I can.

P. S. The Lewis and Clark Café was closed when I got there.  I decided to walk up to the grocery store and scored heavily: a full roast chicken, a quart of yogurt, a pound of strawberries and a quart of milk. All pretty much the opposite of camping food!  I chowed down big time already this evening and I’ll have a fine breakfast in the morning as well.

Clark: 24th of October Cloudy Some little Snow (my Rhumetism Continue, not So bad as the 2 last days,) a butufull Countrey on both Sides, bottoms covered with wood, we See no game to day… we wer visited by the grand Chief of the mandans a 2d Chief and Some other, who wer Camped on the Island, those Chief met our Ricarra Chief with great Corduallity, & Smoked together Cap Lewis Visited the Camps 5 Lodges, and proceeded on & Camped near a 2d Camp of Mandans on the S. S. nearly opposit the old Ricara & Manden Village which the Ricarras abandaned in the year 1789.

What are the differences between your original kayak seat and the new kayak seat, and what do you think will be the advantages of the new seat?

Hi Peter,
The new seat back is a bit higher and stiffer. I’m hoping it will support my back better. I added some foam to the seat bottom to put a little more of my weight on my thighs and less on my tailbone.