It was pleasantly mild when I woke up. I started packing early and since I was ready to go before real daylight, I took a good look around with my little LED for anything I might have left. I found a green sock and a moment later the tent stake I thought I’d never see again. All tent stakes, and most smaller items should be brightly colored, and all tent stakes should have a bright, contrasting loop on them.
I’ve been passing lots of wineries, but it struck me I haven’t been seeing the vineyards. They must be on the flats on top of the cliffs.
About noon I arrived at the tiny town of Mokane, passing the old timey stone jail. After the builder finished it he went on a drunk, and thus became the jail’s first occupant.
The general store had 1/2 gallons of ice cream at a bargain, but I opted for a large fish sandwich, a bottle of chocolate milk and a box of crackers for the road. An old fisherman came over to show the storekeep the giant panfish he’d caught. The flood of ’93 flooded much of the town but not the store, only lapping at the steps. Apparently most local people have moved out of the flood plain.
It rained while I was in the store but stopped before I headed back to the trail. A storm was looming though, and with 9 miles to go I was unlikely to make it to the next town before it hit. I made a plan to walk it with breaks every three miles.
After the second break the storm was still looming. Then thunderstorm began to rumble and flash and I could smell the rain coming, then see it coming across the fields. I grabbed my raincoat, put it on and hustled for town just a few hundred yards away getting pounded by rain. I was looking for the Turner Katy Trail Shelter. Seeing no mention of it at the trailhead I walked, head down, into the tiny town.
There it is! A young black guy was sitting in a pickup. He rolled down his window.

“Are you staying at the shelter?”

“The key is hidden over there.” He pointed.

“Sure thing.”
I walked in dripping. It’s a large, two story building. I’m the only one here. I got a nice, hot shower then washed all my hiking clothes with shampoo in the sink, wrung them out and hung it to dry. 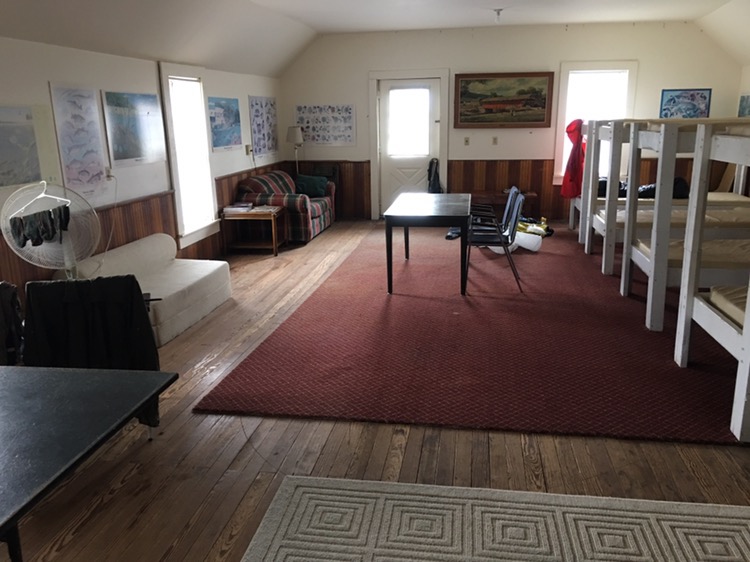 Last I saw it was still raining hard. My first night under a roof. I’m lucky!
Clark

Sunday May 27th as we were Setting out this morning two Canoos loaded with Bever elk Deer Skins & Buffalow Robes, from the Mahars [Omaha] nation, they inform that they left that place 2 months…

had the Perogues loaded and all perpared to Set out at 4 oClock after finishing the observations & all things necessary found that one of the hunters had not returned, we deturmined to proceed on & leave one perogue to wate for him, accordingly at half past four we Set out and came on 4 miles & camped on the Lbd Side above a Small Creek Called Deer Creek, Soon after we came too we heard Several guns fire down the river, we answered them by a Discharge of a Swivile on the Bow

May 31st Thursday 1804 rained the greater part of last night, the wind from the West raised and blew with great force untile 5 oClock p.m.which obliged us to lay by a Cajaux of Bear Skins and pelteries came down from the Grand Osarge, one french man one Indian, and a Squar, they had letters from the man Mr. Choteau Sent to that part of the Osarge Nation Settled on Arkansa River mentioning that his letter was Commited to the flaims, the Inds. not believeing that the Americans had possession of the Countrey they disregarded St Louis & their Supplies &c.—Several rats of Considerable Size was Cought in the woods to day—Capt Lewis went out to the woods & found many curious Plants & Srubs, one Deer killed this evening

Hiking the Lewis and Clark Trail

A veritable Taj Mahal for thru hikers! :o)