It turned out to be a significant rain. When I got up they were saying it would be ending shortly. I enjoyed a couple cups of real coffee and 3 PBJ sandwiches, toasted.

There was water standing in a field. It was very lucky timing that I was indoors, nice and dry. The rain had stopped completely by the time I started walking.

On a prior hike I quoted an experienced hiker who mentioned that you’re going to have some aches and pains and discomforts in your feet and legs, but it’s just part of the game as long as those pains “move around”  without becoming chronic. So far, so good!

I started noticing more and more box elder trees today. And then, in late morning, I could see the Capitol on the skyline.

I was taking a break at the turnoff to Jefferson City when Norman Miller of the Missouri River Paddlers told me Joe Wilson, a hero to the Paddlers, was interested in anything he could do for me. So I hiked a mile or two to the river.  When I arrived Joe beat me to the phone call and sent his buddy Kevin over to pick me up just a few minutes later. Kevin INSISTED on treating me to burgers and fries saying “this is from Joe.”  So thanks to Kevin, Joe, Norman and the Paddlers for the support! 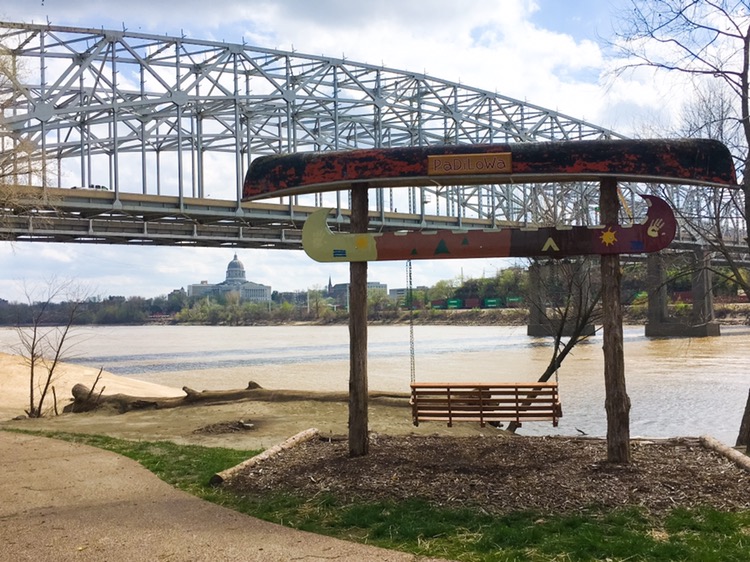 My camp is next to the river in the trees, with a view of the Capitol building.

June 2nd…I measured the Osage & Missouris at this place made ther width as follows, the Missoure 875 yd. wide The Osage R 397 yds. wide…I assended the hill…on the top is 2 graves, or mouns, a Delightfull prospect from this hill which Comds. both rivers. George Drewyer & John Shields who we had Sent with the horses by Land on the N Side joined us this evening much worsted, they being absent Seven Days depending on their gun, the greater part of the time rain, they were obliged to raft or Swim many Creeks, those men gave a flattering account of the country…our hunters kill Several Deer to day, Some Small licks on the S E of the Osage River.

Glad to offer any help!