Too Much of a Good Thing

I woke up to a mild morning after a restful night’s sleep. The stars were bright, the Big Dipper scoop-up near the horizon.

There was barely a glow to the east when I launched into a gentle east wind. With 3-10 mph east winds predicted for the whole day I hoped to make big miles. I dug in and glided smoothly towards the Pacific.

When it got light enough to see I began taking the shortest route from one forested point to the next, further increasing my effective speed. 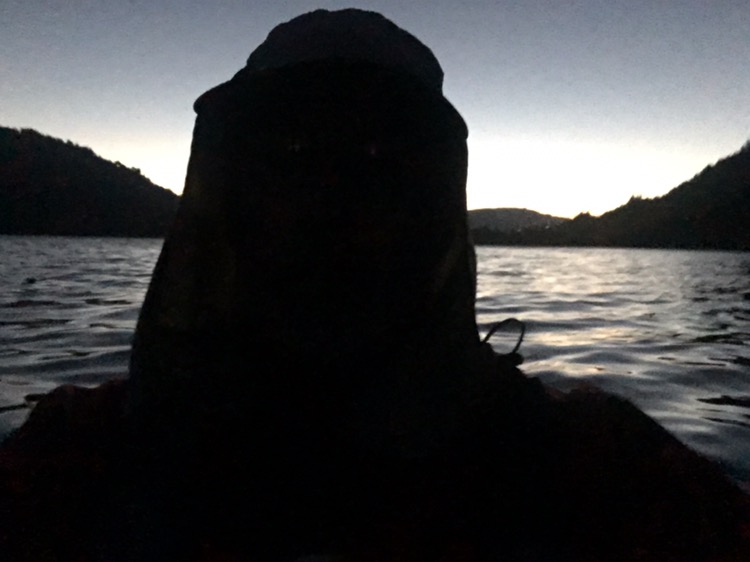 The tailwind and waves built up. When I reached one wooded point I landed the boat to look things over. It would be better to have stayed on the opposite shore had I known the wind would have come up this much.

As I pondered I picked some of the plentiful blackberries. These were a different species than I’d been eating.

I rechecked the wind. The latest reported wind was 3 mph. 3??? It must have been at least 15. (Later I saw NOAA was calling it 15-25.) I hated to waste a tailwind. If I could get across maybe I could still make big miles.

Well I made it but I didn’t like it even a little bit. It was really tough keeping the boat straight. In those big waves it was an uncomfortable feeling. When I got to the relatively mellow waves of the other shore I was thinking about how the strong tailwinds were more unsettling than the headwinds. I think it’s because when a bow wave hits the rudder is driven deeper. When a following wave hits, lifting the stern, the rudder is lifted partially out of the water. I love this kick-up rudder for rocks and weeds, but for following waves I think a bigger rudder would be much better. Kayakers?

I went around a couple more points and that was more than enough for me. I had paddled in the biggest waves of the trip. Flipping wouldn’t have killed me but it would have been mighty unpleasant.

Looking at the map I found a bay where I could access a frontage road. I had to land amid big rocks which was challenging.

It was wonderful to be walking my kayak down the shady, paved road, looking out at the big whitecaps out on the river, where I wasn’t.

I could see mountains I’d seen from the Pacific Crest Trail in 2010. Then “The Bridge of the Gods” appeared. The lowest point on the PCT, it’s where thru-hikers cross into Washington, their last state of the trail. It’s also the bridge where Cheryl Strayed completed her hike in “Wild.”

“You can’t have a kayak here!”

“Where should I move?

“You’ll have to figure that out.”

This wasn’t looking good. He asked me what I was up to and then he and his wife had a conference. They were as friendly as could be. I could just put the kayak by the shed and set up my tent where it was. Problem solved. Thanks!

It was fun hanging out with the thru-hikers. One directed me to the laundromat. I got a wonderful hot shower then headed over to wash my clothes amongst the thru-hikers.

Neil Crawford drove over from Portland specifically to buy me dinner. We had a great talk about adventuring while we ate, with the river right out the window. I had BBQ pork and a huge piece of cheesecake. Thank you Neil!

I think I managed to do nearly 18 miles today. Tomorrow is supposed to be moderate headwinds but after today I’ll believe it when I see it. Colter

Clark: October 30th Wednesday 1805 A Cloudy morning. Some little rain all night, after eating a Slight brackfast of venison we Set out. The rocks project into the river in maney places and have the appearance of haveing fallen from the highe hills those projected rocks is common & Small Bays below & nitches in the rocks passed 4 Cascades or Small Streams falling from the mountains on Lard. This part of the river resembles a pond partly dreaned leaving many Stumps bare both in & out of the water, current about 1 mil pr. Hour The bottom above the river is about 3/ 4 of a mile wide and rich, Some deer & bear Sign—rained moderately all day we are wet and cold. Saw Several Specis of wood which I never Saw before, Some resembling Beech & others Poplar.—Day dark and disagreeable I with 2 men proceeded down the river 2 miles on an old Indian parth to view the rapids, which I found impassable for our canoes without a portage…
Clark: October 31st Thursday 1805 a cloudey raney morning I proceed down the river to view it more at leasure, I took Jos. Fields & Peter Crusat and proceeded on down… found the river rocky for 6 miles, after which the Current became uniform… at 5 miles I passed 4 large houses on the Stard Side a little above the last rapid and opposit a large Island which is Situated near the Lard. Side—The enhabitents of those houses had left them closely Shut up, they appeared to Contn. a great deel of property and Provisions Such as those people use, I did not disturb any thing about those houses… Two canoes loaded with fish for the Trade below Came down & unloaded the after noon fare Those Indians Cut off the hands of those they kill & proserve the fingers.

Hi Buck,
Neil’s graciously shared your blog link with my husband and I. Just amazing! We’re in Warrenton and looking forward to seeing come down this way.
~Staci

Hi Staci,
Neil is a great guy, isn’t he? I hope to make the coast soon!
Buck