Looking at the map I noticed my camp was at nearly the same spot as the Lewis and Clark camp of May 2, 1805.

The mud near my kayak was pockmarked by the big hail that fell last night. It was fortunate that things went so well with no damage and I stayed so dry.

My early start to beat the wind was only marginally successful. A light wind turned to a strong headwind. I was somewhat baffled to find I was fighting a headwind paddling northeast and then on the other side of the bend when I was paddling southwest. Presumably the bluffs and river funnel the wind to some degree, and of course the wind often changes direction. 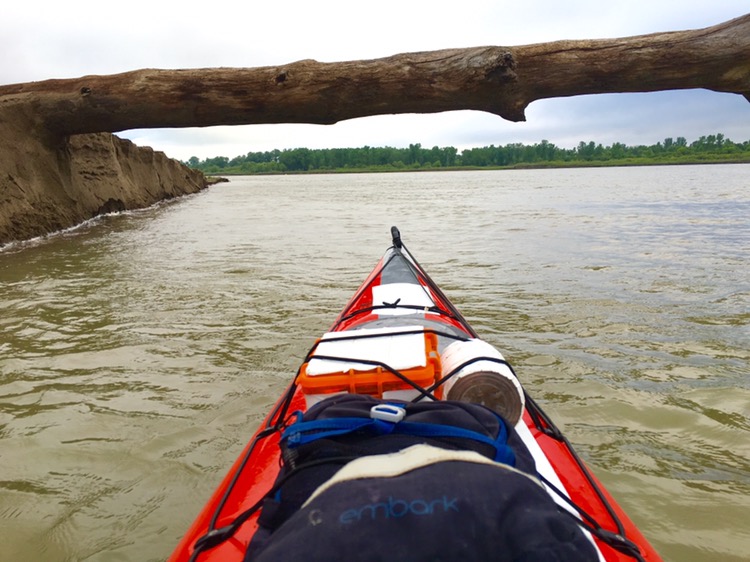 The wind was strong enough that in places I was barely making any progress. I fought to make it to a narrow peninsula where I would have the option of doing a portage. Once I had arrived I carried a bunch of gear up to the shade of a big cottonwood to take a break and plan. I set out my solar charger and sewed a small duct tape patch onto the knee of my pants using a needle and dental floss. I cooked an early lunch of oatmeal as well.

Like last night, I set out a container of 3 quarts of river water so I could settle out the sediment and then treat the clear water with Aqua Mira.

I scouted two routes across the peninsula and found a good one along the grassy edge of the field. I was able to find a route up the fairly steep bank and use my kayak cart to pull my boat up on top. It was relatively easy to pull my kayak through the short grass along the edge of the field and down to the other side to what is now a dry river channel. Although it was 200 more yards over to the water it was hard packed sand and mud making for an easy tow. The portage was fairly easy and saved me about 3 1/2 river miles.

The wind was still howling so for a while I relaxed in the willows and read. It was hard to believe there weren’t any mosquitoes. After an hour or so I set up my tent in the shade of a tree to escape stray ants. It was surprisingly chilly in the tent with the howling wind and the shade so I moved the tent over to a nice sunny flat spot in the willows.

I did a bit of reorganizing and minor repairs. The wind calmed down considerably at about 7:30 PM but I decided to call it a day and get a good sleep and an early start. Colter

Lewis: Thursday May 2ed 1805 The wind continued violent all night nor did it abate much of it’s violence this morning, when at daylight it was attended with snow which continued to fall untill about 10 A.M. being about one inch deep, it formed a singular contrast with the vegitation which was considerably advanced… this evening we also shot three beaver along the shore; these anamals in consequence of not being hunted are extreemly gentle, where they are hunted they never leave their lodges in the day, the flesh of the beaver is esteemed a delecacy among us; I think the tale a most delicious morsal, when boiled it resembles in flavor the fresh tongues and sounds of the codfish, usually sufficiently large to afford a plentifull meal for two men.