When I opened my eyes it was just starting to get light. I was surprised to look at my watch and see it was  3:30 AM. I stuck my head out of the tent to verify, and yes, I could see a glow in the east and to the west I could see the full moon just above the horizon. 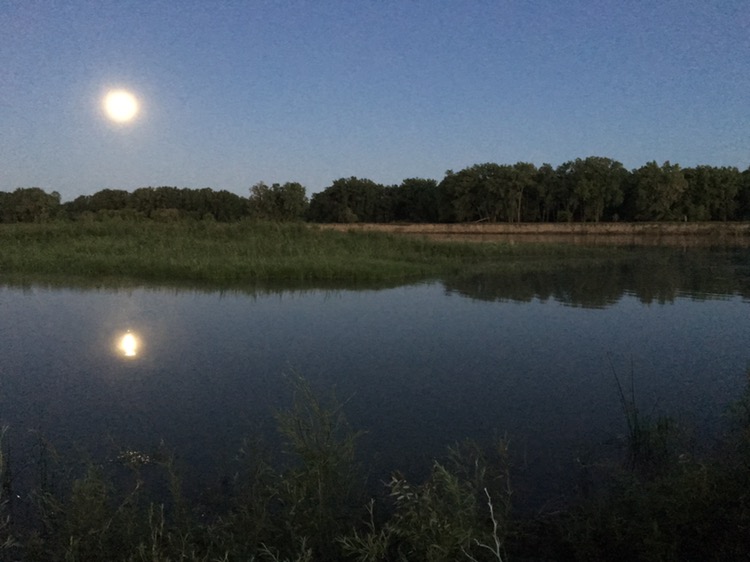 I wanted to get an early start to put in some miles before the wind came up, and so I was on the river at 4:30. It was nearly calm and the water was easy to read. Calm conditions are not only easier physically they are easier mentally. 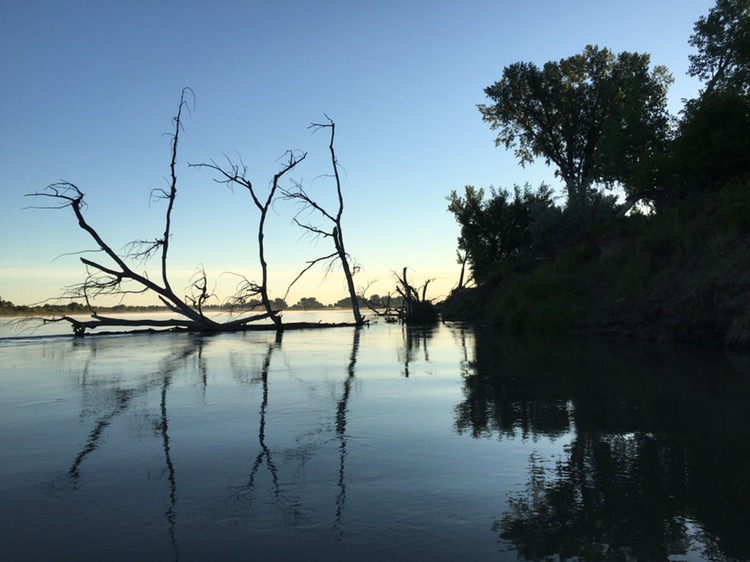 I wish I had had a photographer with me this morning, or somehow I could have magically had my camera in hand and ready to go when needed. One shot I would’ve taken would’ve been the whitetail deer standing in the morning sun with a beaver swimming directly in front of him and a rooster pheasant just to the right. Another would’ve been on a side channel I was paddling when I small flock of ducks flew up in the mist rising off the river. A third would’ve been when of a herd of 20 Angus bulls resting on a sandbar to escape the bugs. Like typical cattle they all decided to run at the same moment, sand flying in all directions. A moment later they stopped, one bull bellowing his disapproval. The brief stampede was quite a show.

Toward the end of the day I was tempted at trying to do a 30 mile day but I was getting tired and I didn’t want to camp too close to the town of Wolf Point. I still did a solid 28 miles, which is a big, big day paddling upstream, especially a day when any wind I had was a headwind.

“Of course, now I am too old to be much of a fisherman, and now of course I usually fish the big waters alone, although some friends think I shouldn’t. Like many fly fishermen in western Montana where the summer days are almost Arctic in length, I often do not start fishing until the cool of the evening. Then in the Arctic half-light of the canyon, all existence fades to a being with my soul and memories and the sounds of the Big Blackfoot River and a four-count rhythm and the hope that a fish will rise.
Eventually, all things merge into one, and a river runs through it…

I am haunted by waters.”

I have paddled about 900 miles since leaving Yankton and have about 600 more to Three Forks. It actually seems a reasonable distance to paddle now. Colter

Lewis: Friday May 3rd 1805… found the nest of a wild goose among some driftwood in the river from which we took three eggs. this is the only nest we have met with on driftwood, the usual position is the top of a broken tree, sometimes in the forks of a large tree but almost invariably, from 15 to 20 feet or upwards high.-

Clark: May 4th Satturday 1805 The rudder Irons of our large Perogue broke off last night, the replaceing of which detained us this morning untill 9 oClock at which time we Set out the wind a head from the west, The Countrey on each Side of the Missouri is a rich high and butifull the bottoms are extencive with a great deal of timber on them all the fore part of this day the wood land bordered the river on both Sides, in the after part a butifull assending plain on the Std Side we Camped on the Std. Side a little above we passed a Small Creek on the L. Side near which I Saw where an Indian lodge had been fortified many year past. Saw great numbers of anamals of different kinds on the banks, I Saw the black martin to day-in the evening I walkd. on Shore on the Std Side & Struck the river Several miles above our Camp & did not get to Camp untill Some time after night—we have one man Sick…

Hey Buck…….I see where you are coming into Wolf Point. Mt. I didn’t remember Wolf Point being that close to the Missouri and so I pulled up Google Maps to check it out. I’ll be damned…. During the years 1954-56 my family lived in Circle. Mt, just 50 miles south of Wolf Point. Being a kid back then I didn’t realize the mighty Missouri was that close by. I also noticed that back there towards the end of Lake Sakakwea is a place called Lunds Landing. I guess there’s more than a few other Norwegians around with the Lund name.… Read more »

Thank you Lundo. I noticed Lunds Landing too. Didn’t you live in Lander and Whitefish later?

I was born in Lander in 1941. Lived in lots of other places in Montana in later years. The Whitefish thing was during the winters and off season from smokejumping. I was big time into skiing then.