The east was bright orange, another beautiful sunrise. There was no dew. This had been a fine camp spot. 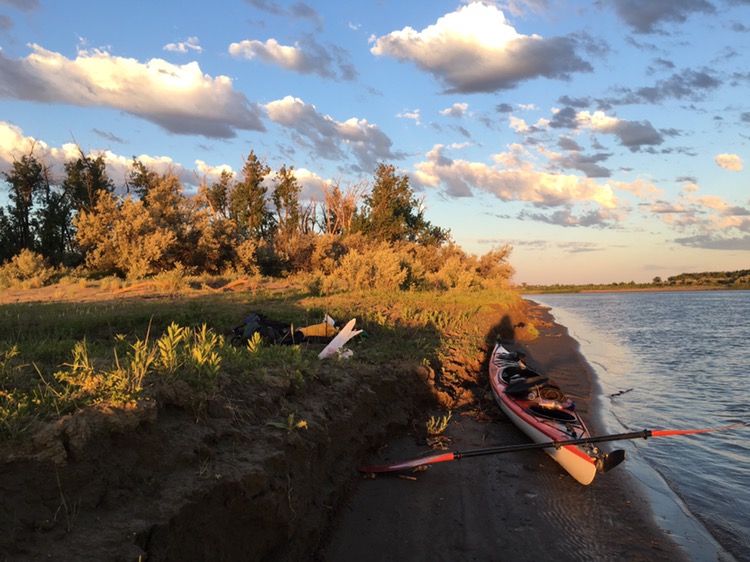 packing the kayak in the morning

I had three quarts of river water settling. After pouring the clear water off the top I treated it with Aqua Mira. When I set the container on a log I noticed a slow leak from the seam. Three out of four of my main water bladders were now leaking.

Paddling upstream the current is a given, the wind is the main variable. At first it was nearly calm, but a southeast wind built as the day progressed.

I created a few gosling panics when the were “trapped” along bluffs. In one instance the parents managed to scramble up a 15 foot bluff, but three of the half grown young tumbled into the water from near the top. None the worse for wear it appeared. I paddled wide in this case and many others to calm them.

Whitetail deer came down to drink. Yesterday I’d seen a mule deer swim the river. Rooster pheasants stood sunning themselves, dashing into cover the instant I spotted them.

During one break I noticed a buffalo scapula on the bluff next to me. From time to time I’d see other bones, some buffalo, others unknown.

A pickup pulled up to the river and three young people from the Reservation got out and waved when I passed. Just then I hit some extremely strong current. I paddled hard trying to find the slowest water, but there wasn’t any nearby and now I was committed unless I wanted to back the kayak downriver.

I made it around the corner and drove for the tip of an island. Just then I heard three shots from a high caliber semi-auto. I glanced back. Just a coincidence.

I made it to the island, nearly spent, where I found slack current. In a mile I landed the kayak for a break in the shade but the mosquitoes were thick. A tried to snooze in the sun by the boat but the biting flies sent me on my way.

At times I had a strong tailwind which was a big help. Eventually the wind was creating big waves in places, especially where there was current. I put on the spray skirt.

Ahead was the glint of a paddle or oar. There was a little catamaran style inflatable with oars and a motor, then another and another, maybe eight total! I paddled towards them in the big waves, coming as close to flipping as I have the whole trip.

“It’s a great day to be paddling upstream!” One shouted

“We’re with a company mapping the river!” I noticed some type of sonar/radar device on each boat.

Late in the day the sky to the NW grew dark. I checked out three campsites and didn’t like the feel of any of them, I found  some combo of bees, cattle, dead branches hanging above, partially beaver chewed-off trees, mud, one spot had a deer skeleton.

Finally, around a bend, I found a spot in some young ash trees, flat and grassy. Two thunder cells loomed. I’d done about 24 miles, 50 in the last two days.

As I set up my tent I noticed my right zippered pants pocket was half open. Oh oh. My ID and credit card in their plastic “wallet” were gone.  I have followed my route to and from the boat, and checked around inside the boat with no luck. Bummer. Not a disaster though. I had cash and another credit card in my pack, and photos of my ID and passport on my phone. I’d have replacements mailed ahead of me.

Just before dark a small herd of cattle grazed right past my tent. They couldn’t see me behind my zippered door, or smell me because of the wind. It was fun watching the little calves troop past. One especially little guy stopped to chew on some grass, apparently not meaning to actually swallow any. I was glad when they all kept going to feed upriver somewhere.

Both thunder cells missed me. Colter

Clark: 5th of May Sunday 1805 We Set out verry early and had not proceeded far before the rudder Irons of one of the Perogus broke which detained us a Short time Capt Lewis walked on Shore this morning and killed a Deer, after brackfast I walked on Shore Saw great numbers of Buffalow & Elk Saw also a Den of young wolves… The Countrey on both sides is as yesterday, handsom & fertile—The river rising & Current Strong & in the evening we Saw a Brown or Grisley beare on a Sand beech, I went out with one man Geo. Drewyer & Killed the bear, which was verry large and a turrible looking animal, which we found verry hard to kill we Shot ten Balls into him before we killed him, & 5 of those Balls through his lights This animal is the largest of the Carnivorous kind I ever Saw we had nothing that could way him, I think his weight may be Stated at 500 pounds, he measured 8 feet 71/ 2 In. from his nose to the extremity of the Toe, 5 feet 101/ 2 in. arround the breast, 1 feet 11 Ins. around the middle of the arm, 3 feet 11 Ins. arround the neck his tallents was 4 Inches &3/ 8 long, he was good order, and appeared verry different from the Common black bear in as much as his tallents were blunt, his tail Short, his liver & lights much larger, his maw ten times as large and Contained meat or flesh & fish only—we had him Skined and divided, the oile tried up & put in Kegs for use. we Camped on the Stard Side, our men killed three Elk and a Buffalow to day…

When you head west across Fort Peck Reservoir, you’ll probably loose contact with those of us who are at home, hunckering over our computers. Sort of like when an Apollo spacecraft went behind the moon. I’ll look forward to when you return to cell phone range and can download the all the daily descriptions of your paddle across the reservoir and up the river to Fort Benton. There are a lot of nice obvious side hikes on the wild and scenic section of the Missouri, like walking up to the hole in the Hole in the Wall rock. Here’s one… Read more »

I’ve been expecting to lose coverage but it seems a surety on that section.

Thanks for the side hike ideas!