I got a leisurely start today which was a pleasant luxury. When I carried everything down to my kayak I made one last careful check under the seat to make sure my mini wallet hadn’t slipped under there. By golly if I didn’t feel it there and pull it out, wet and muddy!  That saved  me the hassle of having to get a new drivers license and credit card. It was a pleasant way to start the day.

Although there was some wind from time to time today most of the day the winds were light. Summery clouds drifted in a blue sky. It was a very fine day for paddling compared to yesterday’s windy chaos.

The river is changing. It’s got a more greenish cast to it, it’s clearer, there is a bit of floating algae and I’m pretty sure I saw trout jump several times. So far the bottom of the Missouri has been almost exclusively mud or sand or scattered rocks. Today when my paddle hit the bottom it often clunked off of hard surfaces, rocks or gravel. There also seemed to be less sandbars, and the water is colder than it was in the Williston area.

There was some faster than normal water today and stretches where I really had to dig in to make progress. There was one significant rapids that I could hear a mile away. Luckily the relative calm made it easy to see where the slowest water was. Counter-intuitively the rapids was on the inside bend and some of the slowest water was on the outside bend. Long ribbons of light green algae waived in the current.

I saw two different whitetail bucks in velvet today, both of them in their summer tan coats which stand out well against the green grass, especially early and late in the day when the sun is low.

Along one bank several goldfinches and a red-start were flitting just ahead of me, over and over. Both species are beautiful birds.  Bald eagles are fairly common, today I saw the first osprey in a while.

There are bank swallow nests by the thousands. Those nests must be good protection from predators but there is a high risk in many places of the bluffs eroding and the nests falling in the river.

Despite my late start I easily made 20 miles. I found a decent campsite but I wanted to camp in the cottonwoods tonight. I paddled another mile to find a good spot. I set up the tent on the grass in the shade of a cottonwood. 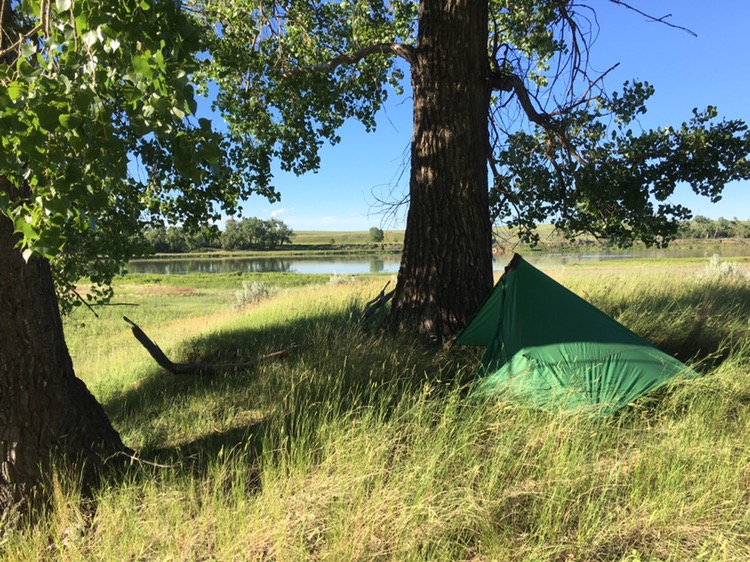 Lewis: Monday May 6th 1805… Fields still continues unwell. saw a brown bear swim the river above us, he disappeared before we can get in reach of him; I find that the curiossity of our party is pretty well satisfyed with rispect to this anamal, the formidable appearance of the male bear killed on the 5th added to the difficulty with which they die when even shot through the vital parts, has staggered the resolution several of them, others however seem keen for action with the bear…

Lewis: May 7th 1805. A fine morning, set out at an early hour; the drift wood begins to come down in consequence of the river’s rising; the water is somewhat clearer than usual, a circumstance I did not expect on it’s rise. at 11 A.M. the wind became so hard that we were compelled to ly by for several hours, one of the small canoes by the bad management of the steersman filled with water and had very nearly sunk; we unloaded her and dryed the baggage; at one we proceed on the wind having in some measure abated… we continue to see a great number of bald Eagles, I presume they must feed on the carcases of dead anamals, for I see no fishing hawks to supply them with their favorite food…

Wyatt: how long did you have to paddle before you had to rest? Have you seen any hot springs?

I often paddle for two hours before resting in the morning, then do an hour at a time.

I haven’t seen any hot springs yet, but I should before I leave Montana!