I took my time getting packed in the morning to give my boat repair a little more time to cure.

The wind was still light on the short paddle to Ice Harbor Dam. I had put the boat cart together before launching so all I had to do was slide the cart on and I was off. I had good cell coverage at the dam. We often forget there are huge areas of the world beyond the reach of cell towers; most of my route from Lolo Montana to this point for example.

There were many vineyards along the river now, along with all the orchards. Very pretty country.

A few miles short of the Columbia River I was surprised when my phone rang. It was another old smokejumper buddy, Jon Larson. He and Randi Jandt were driving through Pasco, he said. Was I by chance in the area?  I said I’d be there in an hour! What a coincidence.

They were waiting for me at Sacajawea Park. It was great to see them. As we were talking my hiking buddy Chris Hansen drove up. That rendezvous had been planned. The four of us drove to a restaurant for lunch. What a fine group of people. 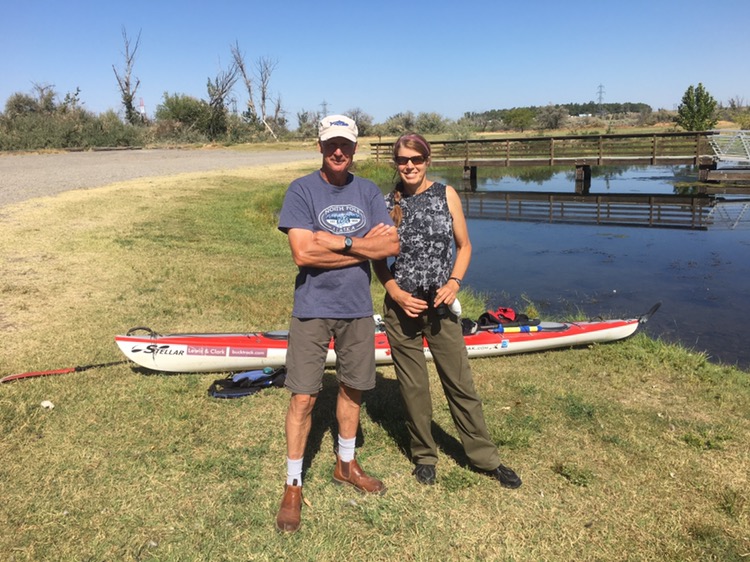 We said goodby to Jon and Randi. Chris drove to his place where I got a shower and did laundry. Next I picked up a few groceries for the next stretch of river.

Chris and I later toured the museum at Sacajawea Park. Very interesting displays about the Corps and local tribes. 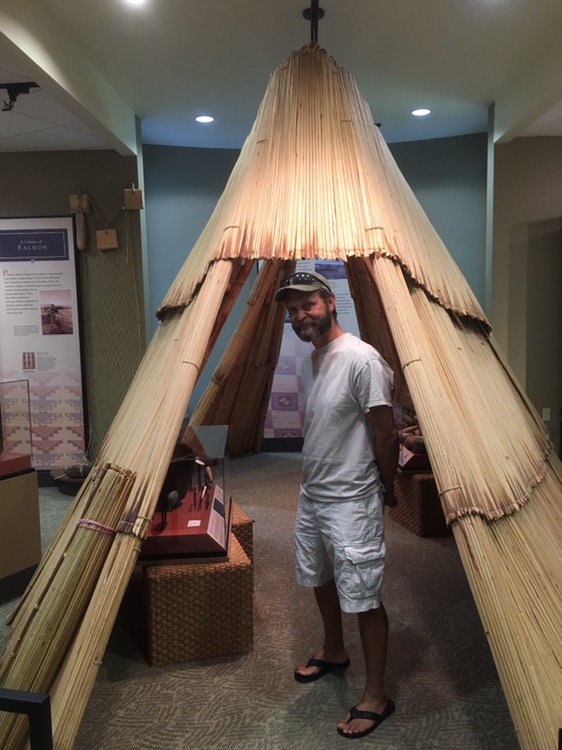 Chris Hansen in a tule shelter

I loaded my kayak and thanked Chris, then paddled onto the Columbia River, a much bigger river than the Snake. I paddled about seven more miles before finding a good camp site just before dark.

Clark, October 16, 1805: …Set out early passed the rapid with all the Canoes except Sgt. Pryors which run on a rock near the lower part of the rapid and Stuck fast, by the assistance of the 3 other Canoes She was unloaded and got off the rock without any further injorey than, the wetting the greater part of her loading—loaded and proceeded on I walked around this rapid We halted a Short time above the Point and Smoked with the Indians, & examined the Point and best place for our Camp, we Camped on the Columbia River a little above the point I Saw about 200 men Comeing down from their villages & were turned back by the Chief, after we built our fires of what wood we Could Collect, & get from the Indians, the Chief brought down all his men Singing and dancing as they Came, formed a ring and danced for Some time around us we gave them a Smoke, and they returned the village a little above, the Chief & Several delay untill I went to bead. bought 7 dogs & they gave us Several fresh Salmon & Som horse dried