When I rounded the very first river bend I could see a bluff, probably the one above the Marias confluence. Was that side channel actually the Marias River? I drifted back 75 yards and checked my GPS. This is it! I would have paddled right past it if I didn’t know it was here.

Under current conditions the Marias looked slow and rather silty, a much smaller river than the Missouri in appearance.

I paddled up the Marias a hundred yards, tied up the kayak and headed through the willows to the bluff. Right away I hit a path that led to a gravel road which I followed to the bluff, then climbed the very steep 100 foot hill.

Here it was, Decision Point, where Lewis and Clark tried to determine which was the Missouri. It took many days with scouting for the Captains to make an educated and correct guess, despite the crew thinking the Marias was the right fork. It was on top of this bluff that I saw the Rockies for the first time on this trip. 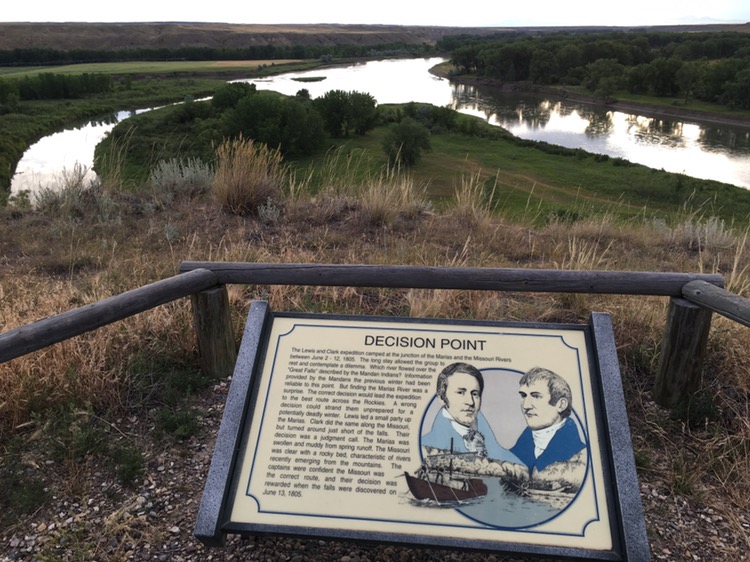 Overall the wind wasn’t bad today but I had to get out and pull the boat many times due to strong current and/or shallowness.
It started to rain, one of the first soaking, daytime rains in my two months of paddling. I spotted a few buffalo bones and an ancient elk antler. When I reached for it, cold water cascaded up my sleeve and down my ribs. I was soaked from the waist down by rain and wading.

There were carp feeding on foam again today. I took this shot: 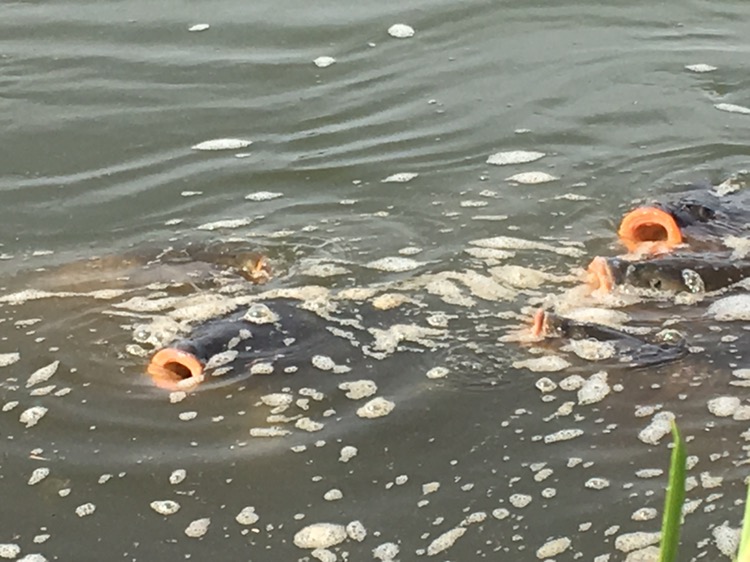 Deer are plentiful, nearly all mule deer. I saw twin fawns again today. During one break I heard splashing and stood up to see a deer behind the willows, wading into the river and then swimming to an island, trotting down a gravel bar and wading all the way to an opposite shore.

I spooked the thousandth family of ducks. As they scattered a bald eagle swooped down and made a grab, but missed. He was way too slow.

There has been so much interesting wildlife, and nature being what it is I’ve seen some sad things, too, animals in their last hours. There was another case like that today.

I passed the site of Fort McKenzie. The fort was run by the American Fur Company in hostile Blackfeet country for about 10 years.

My paddl started splashing, a sign mud is stuck to it, but this time I found the end of the paddles were delaminating. Bummer.From beating on rocks for hundreds of miles I guess. I cut off the worst parts and duct taped the edges, a temporary measure that finished my supply of tape.

It rained all the rest of the day, including while I set up camp on an island about 4 miles short of Fort Benton. I look forward to a real hot shower and hot food. Colter

Lewis: June 2ed 1805…the bear was very near catching Drewyer; it also pursued Charbono who fired his gun in the air as he ran but fortunately eluded the vigilence of the bear by secreting himself very securely in the bushes untill Drewyer finally killed it by a shot in the head; the shot indeed that will conquer the farocity of those tremendious anamals…

Lewis: June 3rd 1805 This morning early we passed over and formed a camp on the point formed by the junction of the two large rivers… which of these rivers was the Missouri… two months of the traveling season having now elapsed, and to ascend such stream to the rocky Mountain or perhaps much further before we could inform ourselves whether it did approach the Columbia or not, and then be obliged to return and take the other stream would not only loose us the whole of this season but would probably so dishearten the party that it might defeat the expedition altogether.

Lewis: June 8th 1805... The whole of my party to a man except myself were fully peswaided that this river was the Missouri, but being fully of opinion that it was neither the main stream or that which it would be advisable for us to take, I determined to give it a name and in honour of Miss Maria W-d. called it Maria’s River.

Someone told me that I wouldn’t enjoy paddling up the Missouri River, in fact they insisted, but I’m happy to say that I do. Of course it’s not always fun, sometimes it’s just plain hard work. But today, perhaps more than any other day of the trip, it was a fascinating, living river.

I studied the weather on this Thursday morning and came up with the general plan: I was a day’s paddle from Fort Peck reservoir. For Saturday, they were predicting headwinds of 30 to 40 miles an hour, for Sunday, headwinds of 15 to 25 miles an hour, think big waves both days. Those would be days made for resting. I’d paddle a short day today and camp along the river. I’d paddle another short day Friday, and camp at the Downstream Campground. Saturday I would do the portage to the Fort Peck hotel and get my first hotel room since about May 2. Sunday I’d finish my portage and camp near the Fort Peck Marina. They are holding my food packages for me.

King birds were common today like they have been for hundreds of miles. I also saw what I believe to be the first Cedar Waxwings of the trip. At times I had record size gaggles of Canada geese in front of me. 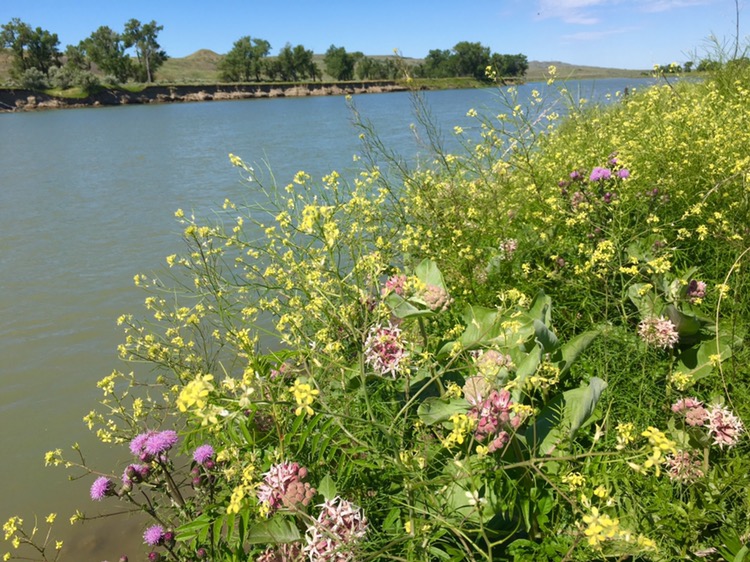 Milkweed, Thistle, and other Wildflowers

I noticed clear water on my left. I was nearing the Milk River!  Soon after, I took a break on the clear water side and watched trout grab bugs off the surface.
At one point a logjam stretched about one third of the way across the river. There was serious current at the end of the log jam so I backed up and swung wide, hoping for slower water on the opposite bank. It was a hard paddle there as well, but doable.

I saw a remarkable thing in the next few miles, something I would be very skeptical of had I not witnessed it myself. In places, 90% of the river appeared to be clear and on the next bend 90% of the river appeared to be milky. Apparently the outside bends were faster and deeper, and the respective waters would be spread out and then constricted again. It was remarkable that the water didn’t mix more in the meantime.

Finally I could see the bluffs above the confluence of the Milk River and the Missouri. I had a strong tailwind, a bit too strong. I paddled up the seam between the clear water on my left and the milky water on my right, it was a remarkably distinct line.

I landed my kayak at the confluence and climbed up the bluff. I was interested to see there wasn’t a human trail established, climbing up at this historical and distinctive spot. There was a great view from the top of the bluff. 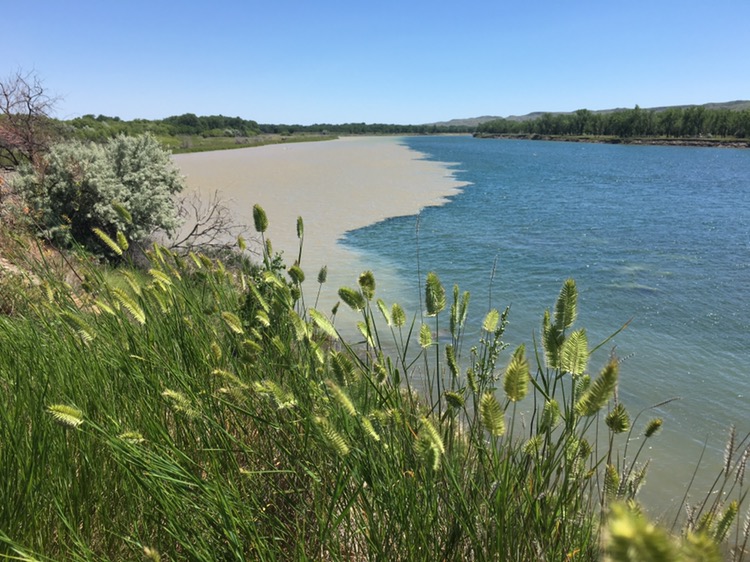 Confluence of the Milk River and Missouri

… we nooned it just above the entrance of a large river which disimbogues on the Lard. side… the water of this river possesses a peculiar whiteness, being about the colour of a cup of tea with the admixture of a tablespoonful) of milk. from the colour of it’s water we called it Milk river. Lewis, May 8, 1805
It appeared as if a rancher appreciated the nice view. He had nice hay mowed and drying in the field back from the river, and had run the mower up to this point, obviously for a picnic area for friends and family.

I would’ve camped here but didn’t want to camp in his spot so I paddled upstream a mile or so. The water was startling in its clarity compared to what I’ve been on earlier in the trip. It almost felt as if I were magically suspended three feet above the gravel bottom. Long white green fronds of algae waived in the current.

The current was stiff now, probably because on this hot day they were releasing maximum amounts of water to generate electricity at the dam, just a few miles away.

There were great looking camp spots left and right. When I was scouting my camp spot a whitetail fawn jumped up and went running off. I didn’t get a good look but they’ve obviously grown a lot already.

I gave my clothes a good rinse in the river and hung them to dry. In the strong wind and hot sun I’m sure they’re dried by now. It’s quite a treat starting late and quitting early. Still, 10 miles of upstream paddling isn’t too bad. Colter

Clark: May the 8th Wednesday… we passed the mouth of a large river on the Starboard Side 150 yards wide and appears to be navagable. the Countrey thro which it passes as far as Could be seen from the top of a verry high hill on which I was, a butifull leavil plain… the water of this river will justify a belief that it has its Sourse at a considerable distance, and waters a great extent of Countrey—we are willing to believe that this is the River the Minitarres [Crow] Call the river which Scolds at all others the Countrey on the Lard. Side is high & broken with much Stone Scattered on the hills, In walking on Shore with the Interpreter & his wife, the Squar Geathered on the Sides of the hills wild Lickerish, & the white apple as called by the angegies and gave me to eat, the Indians of the Missouri make great use of the white apple dressed in different ways—Saw great numbers of Buffalow, Elk, antelope & Deer, also black tale deer beaver & wolves, I killed a beaver which I found on the bank, & a wolf. The party killed 3 Beaver 1 Deer I saw where an Indian had taken the hair off a goat Skin a fiew days past—Camped early on the Lard. Side. The river we passed today we call Milk river from the peculiar whiteness of it’s water, which precisely resembles tea with a considerable mixture of milk.