It was near freezing last night with the humidity near 100%. Moisture condensed on the outside of my sleeping bag but I slept warm. Many coyotes were howling at times.

Cliffs lined the right side of the trail for most of the day and I only saw about a half a dozen people on the trail. Huge, foggy fields lay on the floodplain towards the river in the early morning. Birds sang enthusiastically, including beautiful red cardinals. At one point I saw a pair of Cardinals and a pair bluebirds in the same tree, a few feet apart. A raccoon ran along a narrow ledge high on the cliff face. Luckily he was sure-footed.

Just before 8 I reached a crossroads and was delighted to find an open cafe where I enjoyed biscuits and gravy with coffee.
It turned into a beautiful day, sunny and mild. There is hardly an insect out yet. I saw a color phase of gray squirrel that I’ve never seen before. I would call him A “ghost squirrel,” grayish-white. The old architecture in this area of Missouri, which must’ve been one of the first areas settled, is very interesting. Most of the farmsteads today looked successful and neat with very nice houses and barns and grain bins.

A good rule of thumb when you’re on long hikes and really hungry is the pizza place has just closed, won’t open for several hours, or is open tomorrow, or yesterday. The pizza place in Marthasville was closed as this was Monday.

I tried the feed store hoping they would have some snacks, but they had nothing but animal feed. I plodded over to a gas station and they had a meager selection that was also expensive, but I grabbed a half-gallon of Rocky Road ice cream. I ate two thirds of it effortlessly, put the rest in a plastic bag wrapped in my jacket, and then a few miles later sat down by a pretty little bridge and polished off the rest of it, still half-frozen. 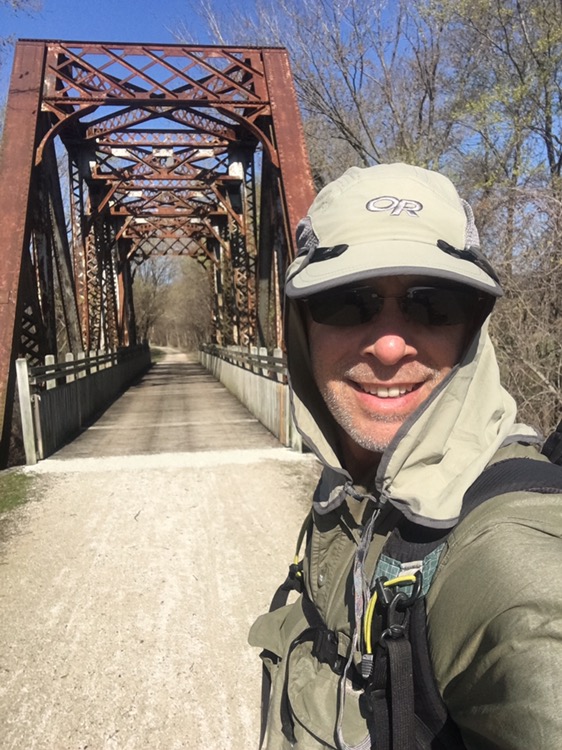 The Katy Trail is a real gem, well-maintained with nice benches every mile or so. The trailheads in small towns, maybe every 10 miles, have really interesting historical signs as well as maps of the trail. One of the few frustrations is the map displays have symbols for water sources, restaurants and grocery stores, yet none of those sources are actually plotted on the map.

It could hardly be easier walking. The only thing making it difficult is my feet are still getting broken in and the nearly unvaried flat surface I believe, is considerably harder on feet and shins than a rolling or slightly uneven surface.
I camped by a brook between the cliffs and river. 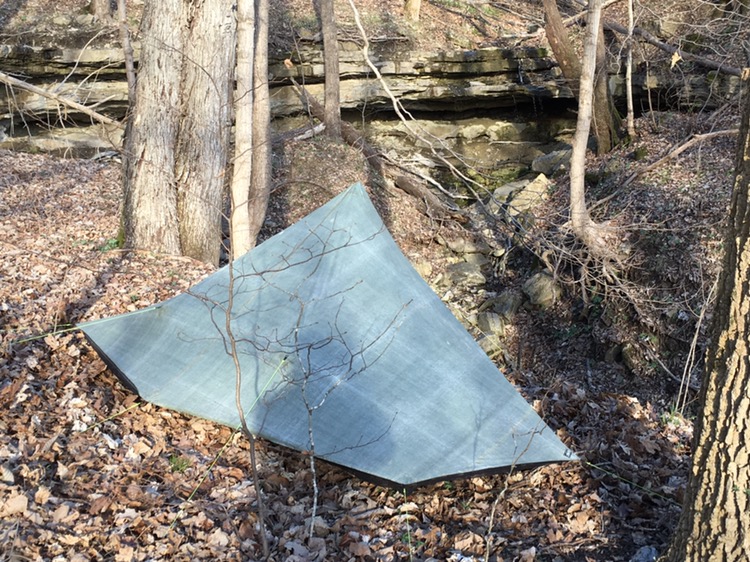 end of the day

Another 20 miles today. The Pacific ocean is still a long ways away, but each day adds up.

rain last night river fall Several inches… Passed a Creek Called R. La freeau at the pt. N 20 ° W 2 miles To a Small french Village called La Charatt of five families only, in the bend to the Starbord This is the Last Settlement of Whites…7 houses and as many families, Settled at this place to be convt. to hunt, & trade with the Indians…

Following along with your progress. One of my daily routines is to check on Buck Nelson’s trek status.

Glad to hear it Lundo!