A salute to Jim Harrison, author of Legends of the Fall and a fine storyteller. I heard today that he passed away.

Easter Sunday on the trail. My feet and legs felt great when I started walking, fully recovered from the day before. Few bicyclists out on the Katy Trail. I was trying to make about three cups of water last until I could get some more. I could always filter more from one of the streams if I needed to, of course.

There were beautiful cliffs along the trail in places today. There’s a species of tree with violet-colored blossoms that contrasted nicely against the gray-brown cliff faces. 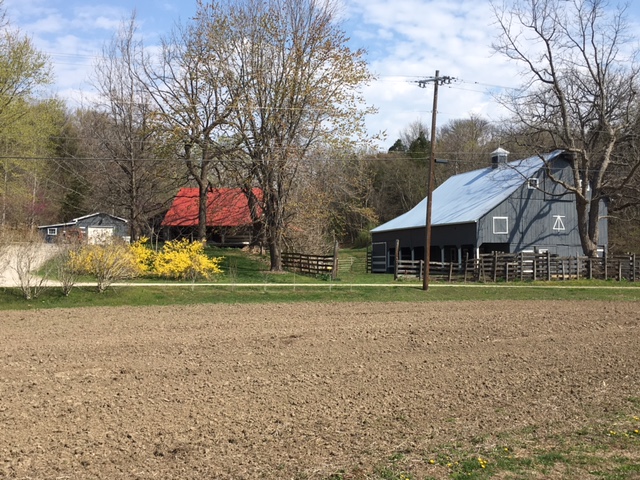 The trail passed the spot where Daniel Boone lived in a small settlement in the final years of his life, along with his family. Many members of the settlement came down to meet the Lewis and Clark party but for some reason Daniel Boone wasn’t among them. It would’ve been a fascinating meeting of some of the continent’s greatest explorers.

I arrived at the neat little town of Defiance expecting to get some water and perhaps some food but the town seemed to be closed down for the holiday. About 5 miles later I reached the small town of Augusta. My research had shown it had two small grocery stores and since I was down to maybe four tortillas and a little bit of peanut butter, I was anxious to get some more food. What I found though, after walking up the steep streets, is that one small store apparently was out of business and the other one had a “Closed for Easter” sign in the door. A few blocks later though, my luck changed, a restaurant had its lights on and I walked in to find it open and myself as the only customer. 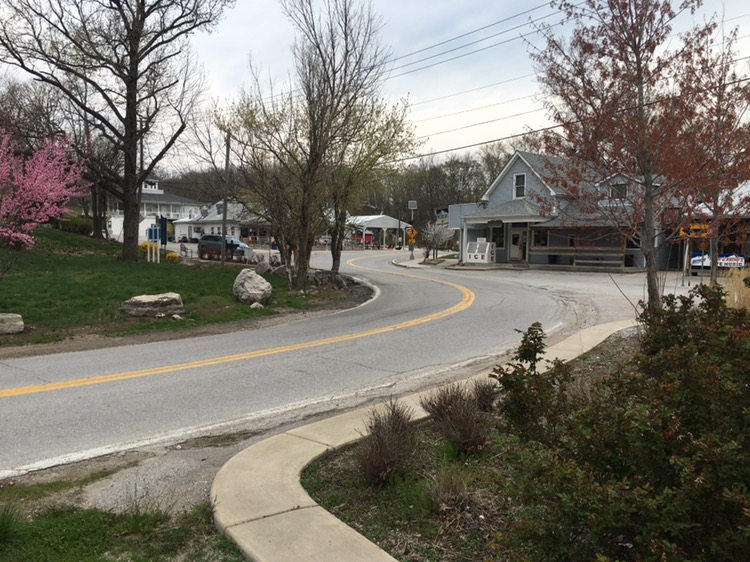 I ordered a salad and a excellent hot sandwich with a burger and fries to go, taking advantage of the Wi-Fi to update my journal and their electricity to recharge my smart phone and iPod.

It’s been nice having the iPod. Some people say that they do adventures like this to escape things like electronics, but six months is a long time to live in your own head. I’ve enjoyed listening to This American Life and Prairie Home Companion and staying current on the news.

It began raining when I was at the restaurant and continued to rain for the next few hours, the first real rain of the trip. It made the wind even colder, but with my good rain gear I was comfortable.
I camped a little early, just shy of a 20 mile day, along a pleasant little brook in a very quiet spot, far from the nearest road. A wild turkey ran along the edge of the cliffs as I approached my site. It was a great feeling to take my shoes off and crawl into my warm sleeping bag.

Capt Lewis assended the hill which has peninsulis projecting in raged points to the river, and was near falling from a Peninsulia hard water all Day Saved himself by the assistance of his Knife…we passed a large Cave on the Lbd. Side about 120 feet wide 40 feet Deep & 20 feet high many different immages are Painted on the Rock at this place. the Inds & French pay omage. many nams are wrote on the rock, Stoped about one mile above for Capt Lewis who had assended the Clifts which is at the Said Cave 300 fee high, hanging over the Water, the water excessively Swift to day, we incamped below a Small Isld. in the Meadle of the river, Sent out two hunters, one Killed a Deer This evening we examined the arms and amunition found those mens arms in the perogue in bad order a fair evening Capt. Lewis near falling from the Pencelia of rocks 300 feet, he caught at 20 foot.

we wer verry near loseing our Boat in Toeing She Struck the Sands the Violence of the Current was so great that the Toe roap Broke, the Boat turned Broadside, as the Current Washed the Sand from under her She wheeled & lodged on the bank below

Along the Katy Trail

Thanks for the updates! Keep’m coming. If you can get to New Haven….it’s an awesome town and MRP member Lance owns the pizza joint there and feeds members who are doing the whole trail. Also make sure you stop in Hermann, Mo….Gary Leabman is THE man there. Check the town outs….it’s awesome. Gary says they let thru-paddlers camp there in the park…..so maybe you count too. Ha. I’d love to walk the trail.

Thanks for the info, Norm. Looks like I’m past Hermann and New Haven but they were a way off the trail anyway. I appreciate the thought!