I slept great. Griff was up making coffee as I packed up my tent. After granola and yogurt and a nectarine we drove back to where Griff had picked me up.

I thanked Griff for the food and making the drive. It sure has been fun hanging out with him. 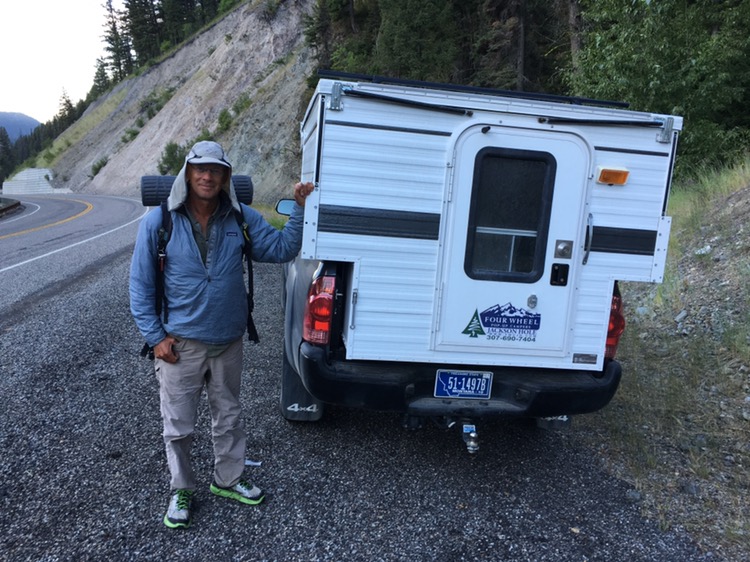 Me and Griffs Camper

It was a nearly ideal morning for hiking over the Pass: few cars, a reasonable grade, and very cool temps. On Lemhi Pass, the Corps of Discovery had horses and an easy trail, here they had a brutal time of it and I had an easy road.

At the top, Lost Trail Pass, three timelines of my life converged: 1998 when we jumped a fire on the Idaho side just before I broke my leg in the Bob Marshall Wilderness, 2008 when I stood here to hitch into Salmon for Continental Divide Trail supplies, and now on this pretty morning.

After a good break at a picnic table I began the steady 7 mile descent into the Bitterroot  Valley along the headwaters of the river of the same name. I stopped at the store at Sula.

“Are you a hiker?” The lady at the register asked. “Do you have a package?” I realized she thought I was a Continental a Divide Trail hiker. Many mail supply packages here.

I was going to get some hot food and use the WIFI. Neither were available. With no cell phone coverage in the last couple of days I was hoping to use the WIFI. I did get some cold food and had a shady break so it was a good stop anyway.

This was the area known as Ross’s Hole and the place L&C got more horses from the Salish or Flatheads.

I put in 25 miles, and then two more miles to find a good camp spot, which turned out to be a grassy spot next to an abandoned spur road hidden by trees. I wrote up a journal entry but still have no way to send it.

It was a good day. It seems strange to be back in Montana, but I’m still in the Columbia watershed. Colter

Clark: September 2nd Monday 1805… at 8 miles left the roade on which we were pursuing and which leads over to the Missouri; and proceeded up a West fork without a roade proceded on thro thickets in which we were obliged to Cut a road, over rockey hill Sides where our horses were in pitial danger of Slipping to Ther certain distruction & up & Down Steep hills, where Several horses fell, Some turned over, and others Sliped down Steep hill Sides, one horse Crippeled & 2 gave out. with the greatest dificuelty risque &c. we made five miles & Encamped on The left Side of the Creek in a Small Stoney bottom after night Some time before the rear Came up, one Load left, about 2 miles back, the horse on which it was Carried Crippled…

Clark: September 4th Wednesday 1805 a verry cold morning every thing wet and frosed, we detained untill 8 oClock to thaw the covering for the baggage &c. &c. groun covered with Snow… prosued our Course down the Creek to the forks about 5 miles where we met a part of the Flat head nation of 33 Lodges about 80 men 400 Total and at least 500 horses, those people recved us friendly, threw white robes over our Sholders & Smoked in the pipes of peace, we Encamped with them & found them friendly… I was the first white man who ever wer on the waters of this river.

Clark: September 5th Thursday 1805 a Cloudy morning we assembled the Chiefs & warriers… and requsted to purchase & exchange a fiew horses with them, in the Course of the day I purchased 11 horses & exchanged 7 for which we gave a fiew articles of merchendize. those people possess ellegant horses.—we made 4 Chiefs whome we gave meadels & a few Small articles…