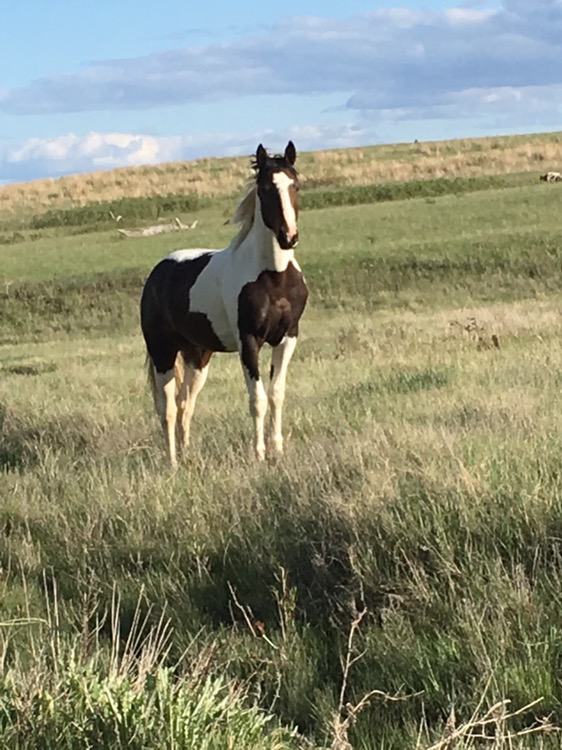 This horse came running over the prairie to meet me last evening after I made my post.

Coldest night of the trip I think. There was a thick layer of frost inside my tent in the morning. I had to put on frozen gloves.

The miles to Big Bend dam went surprisingly quickly. Like yesterday morning I saw many deer, both mule deer in whitetails. They allow you to approach much closer when you’re paddling. I surprised a coyote that was hunting on the very narrow strip of land between the cliff and the river. He turned to run the other way, unfortunately much of that distance there was no strip of land, so he alternately swam and scrambled along the edge until he could escape into a cove. His beautiful fluffy coat looked somewhat bedraggled by the time he disappeared.

The hand numbing cold of the morning changed to a pleasant warming sun as I hit the pullout at Big Bend dam. An older couple who were going to try their luck fishing stopped to chat.

It didn’t take too long to set up the cart and to redistribute the weight in the kayak and off I went.

At the put in point there were a half a dozen fisherman who apparently knew each other. They were talking politics and none of them seemed too pleased with the way things were developing. I took apart the cart and repacked the kayak once more and off I paddled.

The wind was a mixed bag today but the important part was I wasn’t fighting wind all day long.

I’ve been kicking around the idea of portaging the Big Bend of the Missouri. Dave Miller had scouted it and said it looked extremely difficult. At the Narrows it was about 1 1/4 miles or so to the other side of the big loop the river makes. Doing the portage would cut off maybe 20 miles of paddling.

As I got closer to The Narrows I started looking for a potential portage routes. I saw one that looked doable, the big unknown is what it looked like on the other side of the hills, but I figured if I went to all the work to get up on top of those hills I definitely would figure out some way to get the boat down to the river on the other side.

I landed and set up the cart again. There was some rough ground and it definitely was tougher than pulling down a nice paved road!  There was considerable prickly-pear cactus but fortunately my cart wheels don’t have tubes in them so they can’t go flat.

I made it about half the distance before it simply got too rugged for the cart to handle. I took most of the gear out of the boat, bringing along the paddle. Unfortunately I didn’t have any kind of portage yoke and when I lifted the boat I didn’t make it very far before I needed to figure out a Plan B. I took the paddle apart and put one half on each shoulder and the boat on top of the paddle halves. I found I could switch the weight between the paddle shafts on my shoulders and my head on the padded seat.

It was great getting to the top of the hills and to look at the other side of the Big Bend.  It was much steeper on the other side but it seemed clear that I could make it down. I walked down a ridge for a way before dropping down into a drainage. There was some challenging footing but finally I got to a point where there was a reasonable route down to the water where I placed the kayak, triumphant.

Took a little break and then went back to the rest of my gear. I had my backpack from earlier on the trip, so I loaded approximately half the gear in it and grabbed the kayak cart and spray skirt and off I went.

This trip was easier, plus I knew the route. Unfortunately I tried to take one short cut down a volcanic rock strewn ridge and slipped and fell on my butt, catching myself with my hands. This resulted in minor lacerations but likely nothing serious and no equipment damaged. After dropping my load at the kayak I turned around and started climbing back up the mountain again. For some reason the day seemed much warmer. I startled a hen wild turkey who likely had a nest nearby. She flew hundreds of yards across the open canyon.

The last trip was the easiest of all and boy was it great to have everything down on the other side of the Big Bend!  I took a good break and then began reloading the boat. A couple of walleye fishermen had appeared and were fishing nearby. They wanted to know all about what I was up to and were quite interested.

It definitely is a very tough portage and few people are going to want to tackle it. I myself would definitely not want to tackle it if it were wet because it would be extremely slippery and miserable. That said, I’m glad I did it if for no other reason then the adventure.

I had quite a bit of daylight and so I started paddling an hour at a time and then taking a break, putting in many more miles. I had made it nearly 45 river miles, including those I had cut off with my portage, and would have gone farther but a wind unexpectedly appeared and I had to land and camp.

It was a big, big, day, one that I won’t forget! (See photo at bottom.) Colter

Clark: 19th of September Wednesday 1804…The Hunters on Shore Killed 4 Deer with black tails one of which was a Buck with two men Prongs on each Side forked equally, which I never before Seen. I saw Several large gangs of Buffaloes 2 large Herds of Elk & goats &c.

Clark: 20th of September, Thursday 1804 …Detchd. 3 men across the Big bend (Called the Grand deTour) with the horse, to stay and hunt & jurk provisions untill we get around…I walked on Shore with a view of examining this bend Crossed at the narost part which is a high irregular hills of about 180 or 190 feet, this place the gorge of the Bend is 1 mile & a quarter (from river to river or) across…went out to examine the portage which I found quit Short…the Prarie below & Sides of the hills containing great quantites of the Prickly Piar which nearly ruind my feet...
Trip overview and route map with position updates: 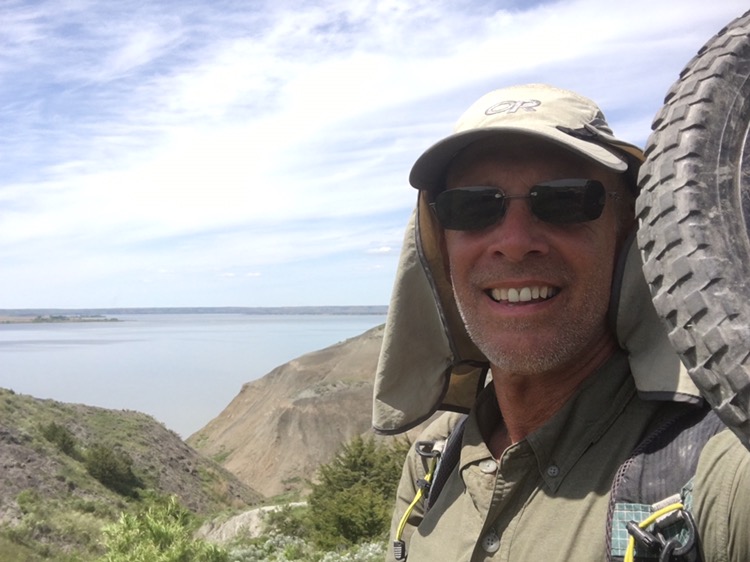 you’re nuts, man, definitely the first paddler to do that portage, maybe even the first white man, lol.