It froze hard last night. It was chilly all day yesterday too and the wind didn’t make it any warmer.

Wanting to get some miles in I was up very early and paddling by about 5:45. There was a quartering headwind but not unreasonable. I must have been cruising about 3 miles an hour.  Right away I started running across trees sticking out of the water where they had been flooded when the reservoir filled. It would’ve been a very rough section to night paddle.

I followed the river bank and as it turned more squarely into the wind waves started building.  I ducked into a cove to put on the spray skirt to keep my boat from swamping. When I got around the next cliffy point the waves started getting a bit much, the biggest I’ve paddled in on this trip. I considered turning back for the cove but decided to push on just a bit to see if there was another spot so I wouldn’t  have to backtrack. That was a good call, just round next headland was a nice little bay.

I checked out the wind predictions again. Northwest winds, and perhaps even stronger as the day went on. The river ahead was now running northwest to southeast meaning the waves would build to their maximum, with nothing to protect me from the wind or waves.

There was a winding little channel at the head of the bay. I dragged my boat up there to a spot hidden from both the river and most of the surrounding area. It was also mostly protected from the wind by the lay of the land. There was a nice flat camp spot in the grass. It was a beautiful spot and screamed “camp here!”

I’d only made about 6 miles. This wasn’t the day’s plan but you play the hand you’re dealt.

I set up camp then climbed the bluff to have a look at the river. The sun was shining. It was warm out of the wind but in the sun, chilly everywhere else. Whitecaps were rolling to the southeast, not a good day for me to be on the water. To the southwest was beautiful wild looking prairie country, dotted with a few trees but mostly grass covered. Two “paint” colored horses were feeding in the distance. 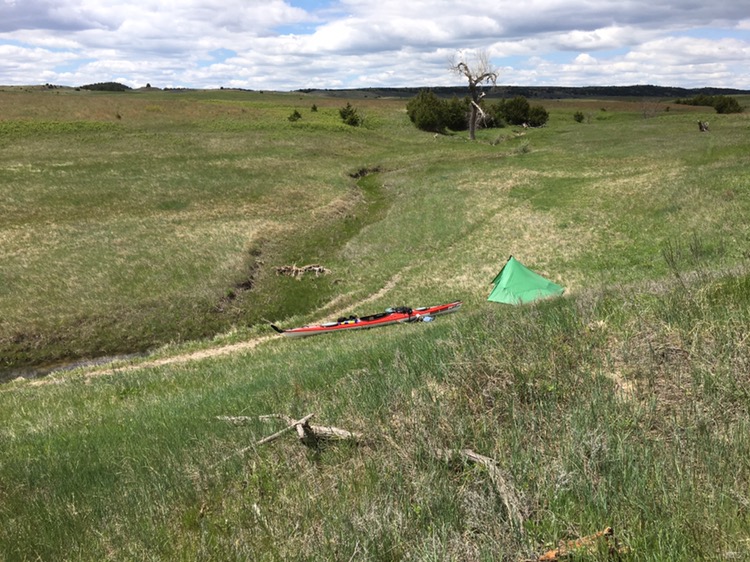 A flake of flint lay at my feet. A spear point or arrowhead was once made here. A magpie flew by, another Western bird, the first I’ve seen on this trip. Another first: a mosquito, likely not the last I’ll see.

Lewis: Sept. 18th this day saw the first brant on their return from the north-

Imagine having the command of a keelboat on the same stretch. I guess you wouldn’t be raising the square sail and coasting up the river either. Maybe you could have sent 20 men out on the shore to cordelle the boat that day, maybe not. If it make you feel any better, I’ve seen the wind blow non-stop UP the Missouri for 3 days straight. I did a historic trek from Brockton, MT to Ft. Union, ND once(64 river miles), and winds were 10, 20, and 25 mph all three days. It was unrelenting. In one place, with 6 of… Read more »