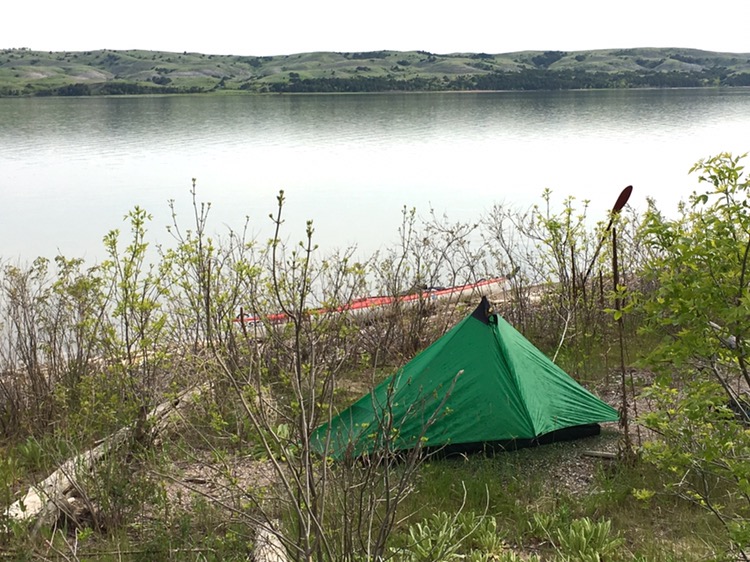 I am now over 1000 river miles from where I started way back in Illinois. That’s nearly 1/3 of the distance of my trip. I definitely think of it as the glass one third full and getting fuller!

Thankfully it was much warmer this morning. My hands didn’t suffer nearly so much packing up. There were many mule deer and whitetail deer again this morning, most of them apparently coming down to drink. Another coyote was hunting along the shore, two eagles took off just as I passed him. Later three pheasants were along the waters edge. A rooster was standing on a log, he crowed and flapped his wings.

During one break I noticed a flint tool on the river bank. A hide scraper perhaps or maybe an arrowhead gone wrong, in any case definitely worked by the hand of man. I left it there.

The winds were light today so I made steady progress. I would’ve put in a few more miles but I’m going to make it to Pierre tomorrow and need to do some errands and so will be spending the night there regardless. So when I spotted a campsite at about 5 PM and tallied my miles at about 28 I decided to call it a day. In the photo of the camp it might not look like much but it’s a nice flat spot and you can’t see the trees just to the left and right that will protect me from the wind if it pops up.

When I was going to cook rice and broccoli this evening my lighter failed. When I’m in the wilderness of course I always bring a spare. I’ll pick up two tomorrow. I’ve got plenty of cold food left for tonight.

There was rain lingering around today but so far I haven’t gotten any. I’ve been very fortunate on missing most of the rain in the past 10 days. Colter

Clark: 21st of September 1804…last night or reather this morng at a half past one oClock the Sand bar on which we Camped began to give way, which allarmed the Serjt on guard & the noise waked me, I got up and by the light of the moon observed that the Sand was giving away both above & beloy and would Swallow our Perogues in a few minits, ordered all hands on board and pushed off we had not got to the opposit Shore before pt. of our Camp fel into the river…we proceeded on to the Gorge of the bend & brackfast, the Distance of this bend around is 30 miles…

Clark: 22nd September Satturday…near the upper part of this Island on its S. Side a Tradeing fort is Situated built of Cedar-by a Mr. Louiselle of St Louis, for the purpose of Tradeing with the Teton Bands of Soues (or “Sieux”) about this Fort I saw numbers of Indians Temporary Lodges, & horse Stables, all of them round and to a point at top, I observed also numbers of Cotton Trees fallen for the purpose of feeding their horses on the Bark of the limbs of those trees which is Said to be excellent food for the horses…