I just made a post from July 28, when I had no coverage

It rained all night. It was still raining this morning when I woke up at 4 AM. I turned on my LED light. Condensation was streaking down the tent walls.

Strong headwinds were predicted for today so I wanted to get on the river at first light. My clothes were wet and I was dry and toasty in my bag, so I did all the packing I could before dressing. My shirt was soaked from about the belly button and shoulders down, and the rest was wet or just damp. I quickly put it on, followed by my wet cap and soaked pants and my rain coat to hold in body heat. I put on my wet shoes and walked down to the kayak, opening the front hatch and digging out my rain pants from the bow.

With my tent in a wet pile I carried everything down to the kayak. With my water and food supplies down so low there was plenty of room in the hatches.

It was much darker than usual when I launched at 5:15. The wind was just starting to come up. Being wet, in the rain and wind the rain gear kept me warm enough. Those who say they never wear rain gear in the summer “because I get too sweated up” must have never been out in a windy rain storm on a cold morning like this. Sweating would not be a problem.

I was in and out of the boat, paddling or pulling where it made sense. A beaver leapt out of a riverbank hole just as I passed, landing with a huge splash. It was startling. Many big fish made me jump as well, rocketing from the shallows, nearly at my feet, into deeper water.

I could see the lights of Fort Benton up ahead. I started wading across the swift river until it got too deep. As I tried to get in the kayak the bow was swinging around in the current with the drag of the rushing water getting stronger and stronger. I had to grab the bow and align it with the current before quickly climbing in. I paddled hard for the other side then jumped out to pull again.

After pulling and paddling for 20 more minutes I could see the boat ramp which I knew was downtown. I half hid my boat at the edge of the willows and tied it off, climbing the steep bank. A guy walking his dog said there might not be any place to eat for breakfast (ouch!) but to try a place a few blocks down.

It was closed but said it opened at 7. Yes! It was 6:45. I waited outside in the rain and wind. An employee was going in.

“Yes, in four minutes,” he said, leaving me outside in the weather. Rules are rules!

Despite that I had a fine hot breakfast and good hot coffee out of the rain in a warm room. What a treat! When I got up to leave there was a generous puddle of rainwater around me.
On my way back to the kayak a guy was loading a canoe at the ramp. He had multiple 5 gallon pails of supplies, big dry bags, plastic totes, two dogs, a 50 pound bag of dog food, a boat cart, paddles AND oars. A completely impractical load in my opinion. He was out to get as far as he could he said.

Paddling to the canoe camp I saw a lost dog I’d seen in town. It started swimming the river! I watched to see if it needed rescue but it made it.
The rain stopped. There was no one at the paddler’s camp. I unloaded my kayak, and carried it and all my gear up and put up my tent.

I got organized and took a good hot shower. I called the animal shelter to report the dog. I visited the  Missouri Breaks Interpretive Center, which had nice animal and fossil displays and a well-done film. Next stop was the laundromat and then to a place across the street for lunch. I ordered a 16 oz. sirloin. It was great. 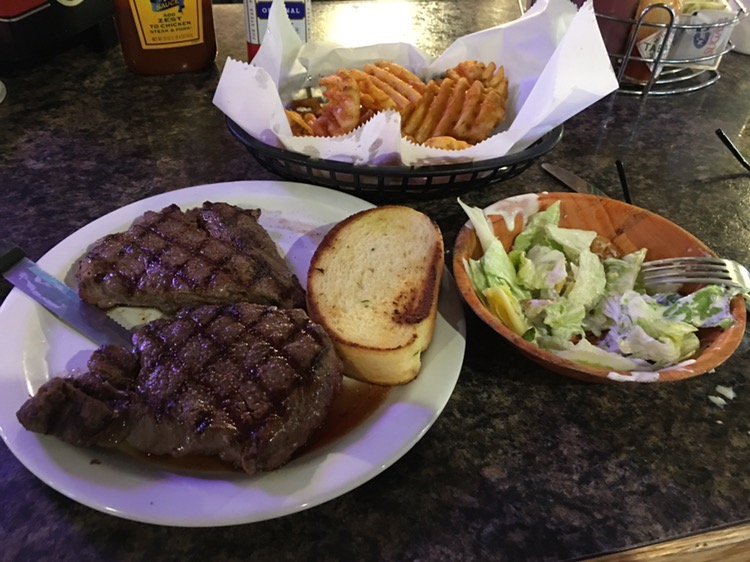 At the hardware store I bought two kinds of tape and zip ties for repairs to my paddle and shoes. Then I went to the grocery store for enough food for the paddle to, and the portage, at Great Falls. Also a half gallon of “Huckleberry Pie” ice cream. I ate it all.

The day was done. Strong headwinds are predicted for tomorrow, too. I’m going to see the rest of Ft. Benton, eat, rest and do my repairs. Colter

Clark: June 12th 1805 Wednesday last night was Clear and Cold, this morning fair we Set out at 8 oClock & proceeded on verry well wind from the S. W. The interpreters wife verry Sick So much So that I move her into the back part of our Covered part of the Perogue which is Cool, her own situation being a verry hot one in the bottom of the Perogue exposed to the Sun—Saw emence No. of Swallows in the 1st bluff on the Lard. Side, water verry Swift, the bluff are blackish Clay & Coal for about 80 feet. the earth above that for 30 or 40 feet is a brownish yellow, a number of bars of corse gravil and Stones of different Shape & Size &c. Saw a number of rattle Snakes to day one of the men cought one by the head in Catch’g hold of a bush on which his head lay reclined three canoes were in great danger today one diped water, another was near turning over &c. at 2 oClock P M a fiew drops of rain I walked thro a point and killed a Buck Elk & Deer, and we camped on the Stard Side, the Interpreters woman verry Sick worse than She has been. I give her medison one man have a fellon riseing on his hand one other with the Tooth ake has taken cold in the jaw &c.