This is a post from when I had no coverage. I just made a post for July 11 as well

I slept great. Only natural sounds surrounded me: frogs, crickets, a mule deer bounding.
I repacked the kayak with a great deal more care, storing food and water I won’t need the next few days in the bow and stern, and things I’ll need today in handy places.

My goal was more big miles. I wanted to get this last big Missouri lake behind me while the weather held.

I barely spotted two people in sculling boats along the opposite shore. I’d hoped to talk to them. Shortly thereafter I saw two tents in the pines. I stopped. It was Mike and Dillon and Cookie the dog, headed to St Louis. It was fun talking to fellow paddlers. Their weather report said big winds coming up today. I headed back out to put in more miles if their report was right.

Several fisherman asked where I was headed and seemed either amazed or incredulous.
Two animals were feeding near shore. Bighorns! Two young rams. It was fun to see another large mammal species. I didn’t realize there were any around here. 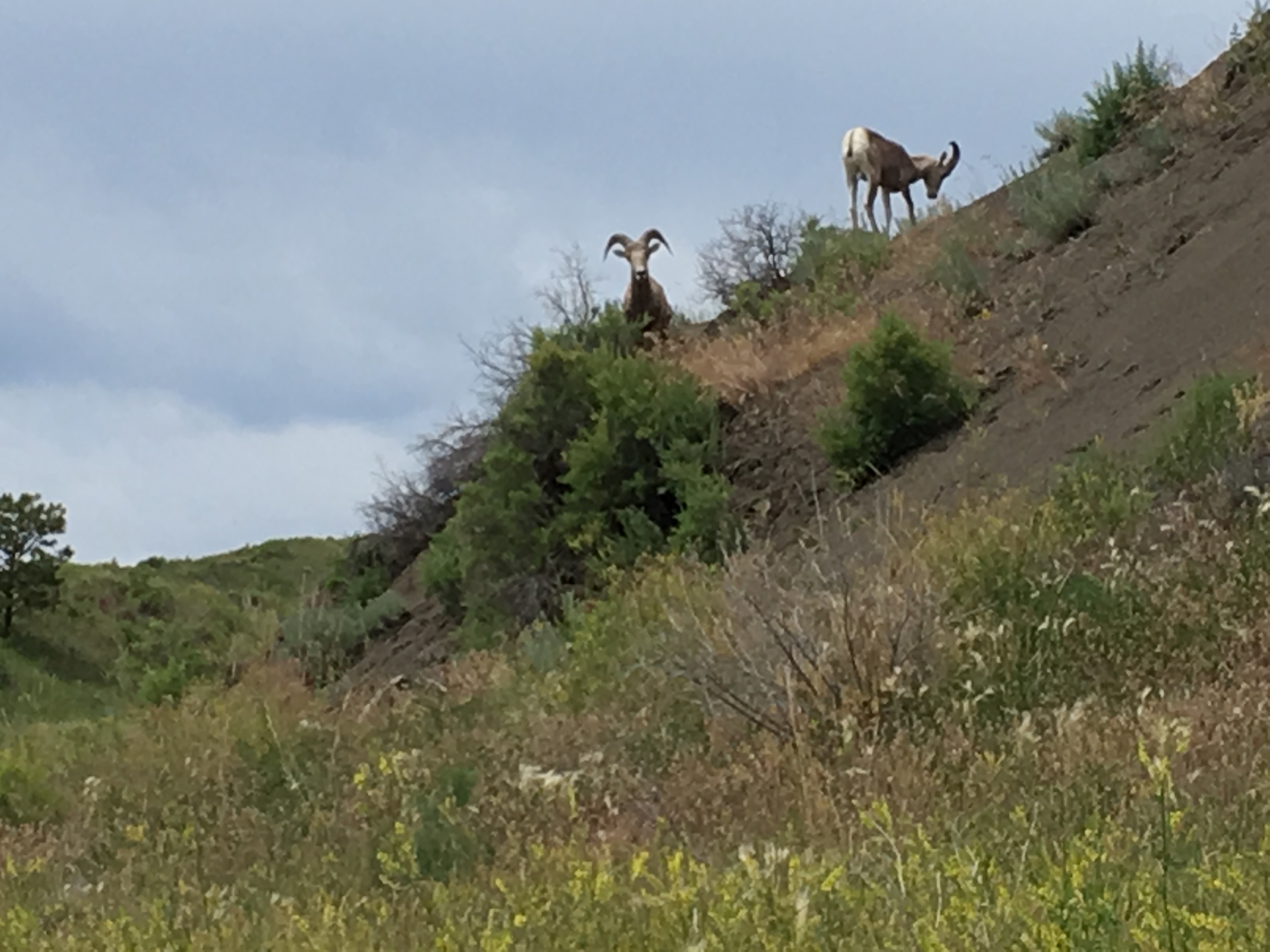 A paddlefish leapt out of the water, his big paddle nose leading the way, landing with a huge splash. Later there was another. A thousand miles of paddling and I finally got a couple of good looks at them.

As I neared 40 miles of paddling I watched for campsites. The distant shore had pines. When I checked out a possible site on this shore it was best described as creepy. The water was full of silt and weeds, the shore muddy, the bluff susceptible to landslides and the ground covered with thistles. The next spot was similar. The third was much improved. Good thing because I was tired. Colter

Lewis: Saturday May 11th 1805… the courant strong; and river very crooked; the banks are falling in very fast; I sometimes wonder that some of our canoes or perogues are not swallowed up by means of these immence masses of earth which are eternally precipitating themselves into the river; we have had many hair breadth escapes from them… my attention was struck by one of the Party runing at a distance towards us and making signs and hollowing as if in distress… he informed me… he had shot a brown bear which immediately turned on him and pursued him a considerable distance but he had wounded it so badly that it could not overtake him; I immediately turned out with seven of the party in quest of this monster, we at length found his trale and persued him about a mile by the blood… and shot him through the skull with two balls… we now found that Bratton had shot him through the center of the lungs, notwithstanding which he had pursued him near half a mile… these bear being so hard to die reather intimedates us all; I must confess that I do not like the gentlemen and had reather fight two Indians than one bear;

In the evening the men in two of the rear canoes discovered a large brown bear lying in the open grounds about 300 paces from the river, and six of them went out to attack him, all good hunters; they took the advantage of a small eminence which concealed them and got within 40 paces of him unperceived, two of them reserved their fires as had been previously conscerted, the four others fired nearly at the same time and put each his bullet through him, two of the balls passed through the bulk of both lobes of his lungs, in an instant this monster ran at them with open mouth, the two who had reserved their fires discharged their pieces at him as he came towards them, boath of them struck him, one only slightly and the other fortunately broke his shoulder, this however only retarded his motion for a moment only, the men unable to reload their guns took to flight, the bear pursued and had very nearly overtaken them before they reached the river; two of the party betook themselves to a canoe and the others seperated an concealed themselves among the willows, reloaded their pieces, each discharged his piece at him as they had an opportunity they struck him several times again but the guns served only to direct the bear to them, in this manner he pursued two of them seperately so close that they were obliged to throw aside their guns and pouches and throw themselves into the river altho the bank was nearly twenty feet perpendicular; so enraged was this anamal that he plunged into the river only a few feet behind the second man he had compelled take refuge in the water, when one of those who still remained on shore shot him through the head and finally killed him; they then took him on shore and butched him when they found eight balls had passed through him in different directions…

Lewis: we had been halted by an occurrence, which I have now to recappitulate, and which altho happily passed without ruinous injury, I cannot recollect but with the utmost trepidation and horror; this is the upseting and narrow escape of the white perogue It happened unfortunately for us this evening that Charbono was at the helm of this Perogue, in stead of Drewyer, who had previously steered her; Charbono cannot swim and is perhaps the most timid waterman in the world; perhaps it was equally unluckey that Capt. C. and myself were both on shore at that moment, a circumstance which rarely happened; and tho we were on the shore opposite to the perogue, were too far distant to be heard or to do more than remain spectators of her fate; in this perogue ____ were embarked, our papers, Instruments, books medicine, a great part of our merchandize and in short almost every article indispensibly necessary to further the views, or insure the success of the enterprize in which we are now launched to the distance of 2200 miles. surfice it to say, that the Perogue was under sail when a sudon squawl of wind struck her obliquely, and turned her considerably, the steersman allarmed, in stead of puting her before the wind, lufted her up into it, the wind was so violent that it drew the brace of the squarsail out of the hand of the man who was attending it, and instantly upset the perogue and would have turned her completely topsaturva, had it not have been from the resistance mad by the oarning against the water; in this situation Capt. C and myself both fired our guns to attract the attention if possible of the crew and ordered the halyards to be cut and the sail hawled in, but they did not hear us; such was their confusion and consternation at this moment, that they suffered the perogue to lye on her side for half a minute before they took the sail in, the perogue then wrighted but had filled within an inch of the gunwals; Charbono still crying to his god for mercy, had not yet recollected the rudder, nor could the repeated orders of the Bowsman, Cruzat, bring him to his recollection untill he threatend to shoot him instantly if he did not take hold of the rudder and do his duty, the waves by this time were runing very high, but the fortitude resolution and good conduct of Cruzat saved her; he ordered 2 of the men to throw out the water with some kettles that fortunately were convenient, while himself and two others rowed her ashore, where she arrived scarcely above the water; we now took every article out of her and lay them to drane as well as we could for the evening, baled out the canoe and secured her; there were two other men beside Charbono on board who could not swim, and who of course must also have perished had the perogue gone to the bottom.