A calf was loudly bawling nearby, long before dawn.

A mule deer buck watched from the edge of the willows as I rounded the first bend.

At first the current was fairly mild, but then it became more consistently strong, and I spent more and more time out of the kayak pulling upstream.

Something was floating in the water. Some dark foam? No, a young hawk, so freshly drowned I wondered if he might revive when I pulled him out. Just ahead were some high, dark bluffs. He likely died attempting his first flight. 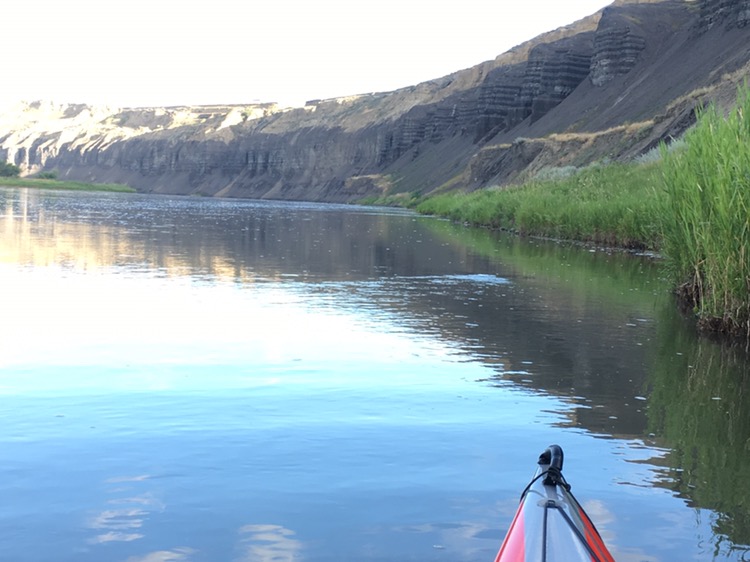 Four eagles, and some lurking magpies, fed on something at the edge of the water. They were reluctant to fly. It was a mule deer fawn. 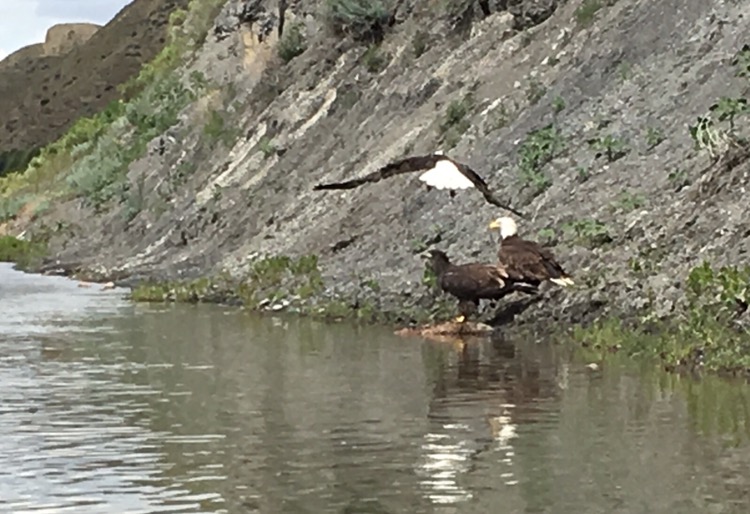 I took a chance paddling up a side channel, enjoying an escape from the current. After a half mile it dead-ended completely. I got out to scout but there was no easy portage as I’d hoped. I retreated and had to fight my way up that same half mile in the main channel.

During breaks I’d check my progress and be surprised at how few miles I’d made, the result of the strong current, including passing some rapids, but also of a more relaxed pace.

I saw some fossils today, and some large thin slabs of slate.

Several thunder cells moved through. Most missed me but at least two didn’t. One pounded me with hard rain. I’d just put on my rain jacket and watched the driving rain bounce off the river. I thought about the photos I’ve been taking. I’m much more likely to take shots of reflections in calm water rather than dragging my kayak through tough current, or of s sunny day rather than s stormy day, mostly due to ease of photography.

It will be something like 31 miles from Fort Benton to the start of my portage, normally two easy days. It was clear, though, that it would be tough to make half of distance today, and the toughest miles of all would be the rapids just below Morony Dam. I’d want to start the long portage fairly refreshed and early in the day, so I’d shoot for three shorter days instead of two tough ones. Despite nearly 12 hours on the river, I only made about 14 miles.

I made camp next to the river and used my alcohol stove to cook up a hot meal of “Steak and Fajita” flavored rice.

Clark: June 13th Thursday 1805 a fair morning, Some dew this morning the Indian woman Verry sick I gave her a doste of Salts. … numbers of gees & goslings, the gees cannot fly at this Season—goose berries are ripe and in great abundance, the yellow Current is also Common, not yet ripe Killed a buffalow & Campd on the Lard Side near an old Indian fortified campy one man Sick & 3 with Swellings, the Indian woman verry Sick. Killed a goat & fraser 2 Buffalow The river verry rapid maney Sholes great nos of large Stones passed Some bluffs or low cliffts of Slate to day

Rest and Repair in Ft. Benton