Note: This posts covers two more days when I had no coverage. I also posted for two other days today…

I woke up during the night with an itchy back. My arms and sides were also itchy in places. Some mysterious bug bites. Not mosquitos I think, as they rarely raise welts on me and because of the spotty locations.

I had a tailwind at first and deployed my sail, wishing I’d used it earlier. I was cruising about 3 to 4.5 miles an hour. After a half hour it got too windy. I stowed the sail and paddled hard to keep the kayak straight and to round the corner where I landed and took a break. The wind let up.

My body has mostly adapted to the kayak with the help of the higher seat back and seat I modified with padding. A huge difference in comfort.

It was a three mile beeline to the next point. I saw a nice gentle ridge 200 feet up to a high point. Hoping to send out my journal entries I climbed it. No coverage at the top, but a great view of the UL Bend country. I could see most of the bend and for many miles all around. An old cabin stood in the distance. Must have been a lonely place a hundred years ago, because it would be today.

On the way down I spotted a large shed snake skin. Later I saw a whitetail and then a mule deer, I think.

A quartering headwind sprang up which I couldn’t escape on either shore. I landed for a break, sinking in mud to my ankles. I scooped up some silty water and climbed the hill a way to cook a lunch of instant potatoes out of the wind, moving over to the shade of a pine to relax.

Later when the river/lake turned west I heard voices along the south shore. Paddlers? I couldn’t see them. I hugged the north shore for wind protection. Willows encroached in this delta area. Soon I’d have current. I paddled for about two miles before my channel became noticeably shallower. I began weaving around willows.

Ducks were everywhere. I followed a faint channel towards the other bank. Finding grass sticking out of the water I landed to explore.

I stuck my paddle vertically as a marker and took a GPS fix. This would be a very easy place to lose my kayak. I walked straight towards the other shore, in 2″ to 6″ of water, often sinking into mud and having to push through high grass and willows. After 20 minutes or so I found the main channel.

Luckily I relocated my boat. What do I do now, paddle back a couple of miles? Look for a channel leading over to the main one? I elected to take the shortest, horrible route I knew.

I tied my bowline to half of my paddle and started pulling. The shallow water helped a lot. The toughest spots were the willows and shallowest areas. Biting flies and mosquitoes swarmed me. It was a good time to be alone. There would likely have been lots of complaining and possibly weeping otherwise. 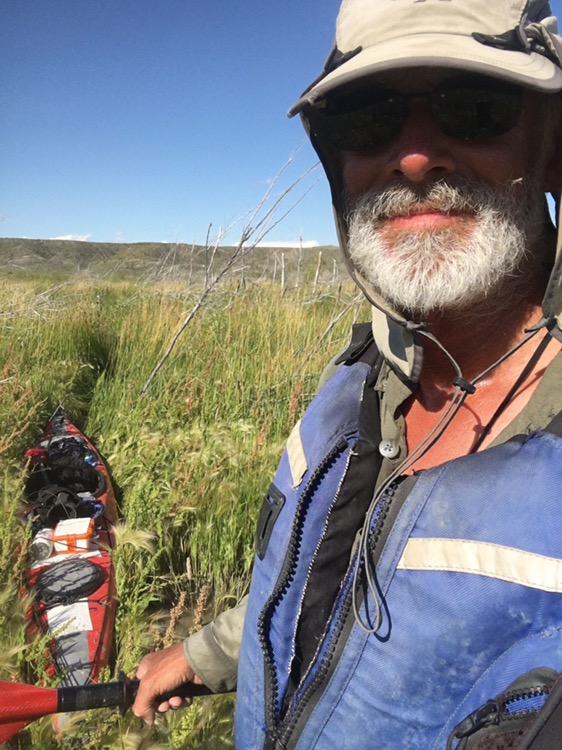 It wasn’t easy but it worked out well. I walked out into knee deep mud and water to launch the boat into a light current. I’d done nearly 30 miles. The next camp spot was mine.

A nice pine stand was on my left. The only place to land was mud and willows. The worst mosquitos since the Yellowstone met me. I scouted the area. I’d have to climb to a bench, aka flat spot, in the pines. With the kayak secured I carried everything I needed in my pack and hands in one trip.

It was a steep climb but this camp had a wonderful feel to it, the opposite of the muddy, buggy swamp. It was shady, high, dry and breezy, a camp in the pine straw with a beautiful view. Colter 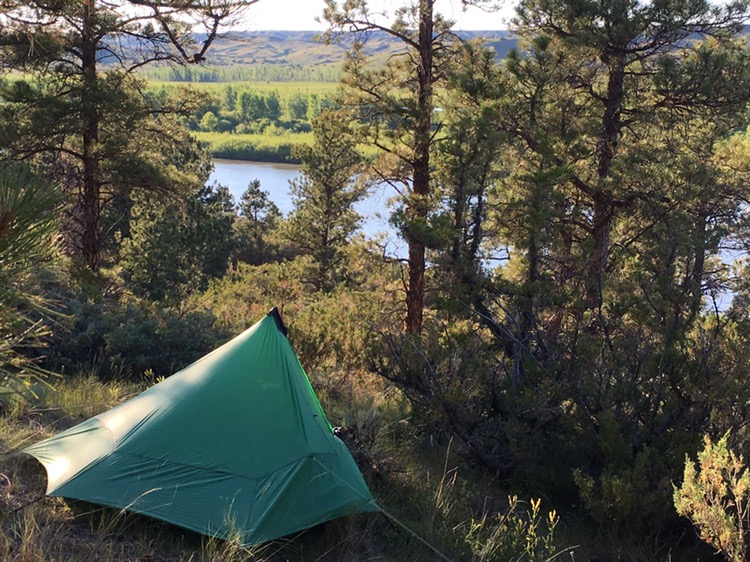 Lewis: Thursday May 16th… by 4 oClock in the evening our Instruments, Medicine, merchandize provision &c, were perfectly dryed, repacked and put on board the perogue. the loss we sustained was not so great as we had at first apprehended; our medicine sustained the greatest injury, several articles of which were intirely spoiled, and many others considerably injured… the Indian woman to whom I ascribe equal fortitude and resolution, with any person onboard at the time of the accedent, caught and preserved most of the light articles which were washed overboard

Lewis: May 17 Capt Clark saw an Indian fortifyed camp this evening, which appeared to have been recently occupyed, from which we concluded it was probable that it had been formed by a war party of the Menetares who left their vilage in March last with a view to attack the blackfoot Indians in consequence of their having killed some of their principal warriors the previous autumn. we were roused late at night by the Sergt. of the guard, and warned of the danger we were in from a large tree that had taken fire and which leant immediately over our lodge. we had the loge removed, and a few minutes after a large proportion of the top of the tree fell on the place the lodge had stood; had we been a few minutes later we should have been crushed to attoms.

It was a beautiful, calm morning. At first the current was light and the water glassy. The river was relatively straight and narrow.

After a while I was surprised to see three canoes. They greeted me with the standard “You’re going the wrong way!” They were a cheerful group, out for about three days and having fun. They were amazed when they asked where I was headed.
This stretch of river is the narrowest I’ve seen. There are places where someone with a good arm could throw a rock across.

Later a log cabin and campsite appeared on the left bank. On a steep, outside bend it was very difficult to land. I checked out the careful notching of the cabin. These old cabins are rapidly disappearing. A smaller cabin featured prickly pear cactus on the roof.

I studied the map. My right arm was a bit sore. James Kipp landing was about 40 miles away. I’d do two 20-milers and get there tomorrow afternoon.

Goldfinches flitted near a bluebird. Both beautiful birds. Paddling near shore I saw a carp with its head out of the water eating something on some roots! 20 seconds later a second carp was doing the same thing.

I checked out a primitive camp on another bend. Again a landing was very difficult on the steep outside bend. The tree leaves were being eaten by some kind of caterpillars. I didn’t like the feel of the place. I got back in my boat with care. The bank was very slippery with a steep drop-off. People must often fall in here trying to launch canoes.

Eventually I found a tolerable landing spot in another mile. I climbed a bank and walked through the thistles and willows and made an early camp in the shade of cottonwoods. I spent over two hours catching up on my journaling. Thunder rumbled but the storm didn’t reach me. Colter

Clark: May 23rd Thursday 1805… I walked on Shore and killed 4 deer & an Elk, & a beaver in the evening we killed a large fat Bear, which we unfortunately lost in the river, after being Shot took the water & was Carried under a drift… The after part of this day was worm & the Misquitors troublesome. Saw but five Buffalow a number of Elk & Deer & 5 bear & 2 Antilopes to day. the river beginning to rise, and Current more rapid than yesterday, in maney places I saw Spruces on the hills Sides Stard. this evening.