Something caught my eye and I looked down to see a little black dog trotting down the road with me, friendly and confident. I petted him but them told him he had to go home. He was fine with that. I looked back to see him romping in his yard.

I walked across the Missouri River on a very long bridge. The gravel road I’d meant to take on the other side was 50 feet below me, with the bridge continuing across the flood plain. When I found a way down a canal blocked my route, but finally I got back on track.

I ran across two closed segments of road today, but both were negotiable on foot.

I was passing an old farm house. Three big dogs ran out acting aggressively. The owner came out. He tried to call the dogs off with little luck. I took off my pack and faced them.

The old farmer asked me to come in and sit down. He shared his dinner with me while he told me the sad story of his life, which he assured me repeatedly he had ruined, taking a good farm and drinking it away. At one point he had been a well known classical musician as well “playing everywhere but Carnegie Hall.”

I was happy to be leaving, keeping an eye on his dogs. I felt a chomp on my right calf. His St Bernard had bit me. It drew blood, but didn’t seem too bad. I walked away as the farmer shouted his apologies.  Had it not been for the assurances of the farmer, I wouldn’t have gotten bit. 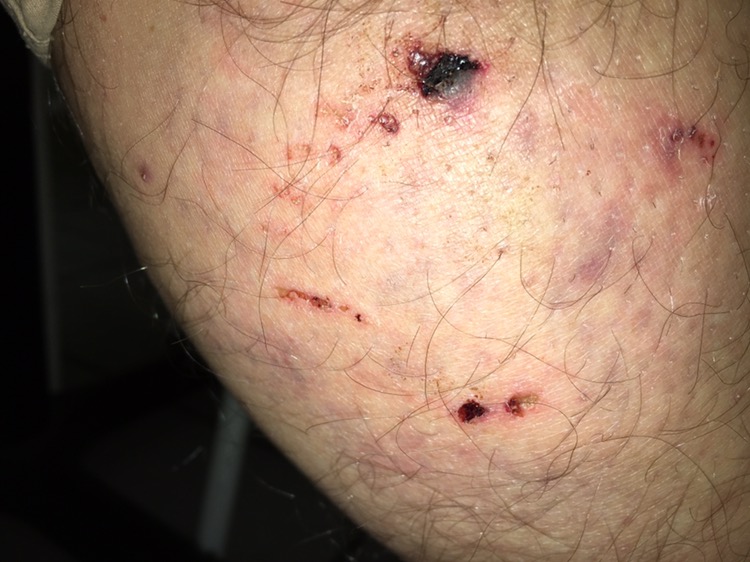 It doesn’t seem bad at all. It’s the next morning and if I didn’t look at it I wouldn’t know I’d gotten bit. The dog’s name? Duke.
I walked until about 6 before finding a place to camp. I think I did about 23 miles.

21st June Thursday 1804 river raised 3 Inches last night after our bow man Peter Crousat a half Mahar Indian examined round this Small Isd. for the best water, we Set out determined to assd. on the North Side, and Sometimes rowing Poleing & Drawing up with a Strong Rope we assended without wheeling or receving any damige more than breakeing one of my S. Windows, and looseing Some oars which were Swong under the windows Two men Sent out to hunt this afternoon Came in with a Deer, at Sun Set The ellement had every appearance of wind, The hunters inform me that the high Countrey on the S. S. is of a good quallity, and well timbd. The High lands on the L. Side is equally good The bottom land on this river is alike, 1st low and covd. with Cotton wood & willows Subject to over flow the 2nd is higher groth Cotton Walnut ash Mulberry Linn & Sycomore

Corn and the Confederacy

Dang! Hopefully the worst event of your trip.