I like to set up my shelter on well drained,  flat spots. Yesterday evening I was forced to compromise with just a slight slope. When the lightning begin flashing and the thunder begin blooming and I heard the rain hitting the tent I looked to make sure everything was underneath the fly. One side of the tent is about two thirds open and that was on the downhill side, what that meant is that I was partially sliding outside of the tent. I came up with a solution that worked pretty well: I took my firmly inflated sleeping pad and laid it on its side up against the tent pole, so that kept me in the tent. The ground was soft enough so I slept quite well the last couple of hours until morning.

The weather was hard to dress for when I began walking, it was fairly warm but still trying to rain. When I put on my rain gear, with the warmth and the 100% percent humidity I was too warm and clammy, but I also didn’t want to get soaked, especially that early in the day.

I took another look at the map and decided to skip my next resupply which was going to add maybe 2 miles. Much to my delight I ran across a totally unexpected gas station, a double-score as they also served hot food, so I had coffee, biscuits and gravy for breakfast. That was a big bonus.

Again today I walked through some fairly rundown areas and some real fancy areas. There was a reasonable amount of topography which actually is good for the legs I think.

I saw what I think were the first gold finches and blue wing teal I’ve seen,  also some big frogs and a profusion of flowering trees. 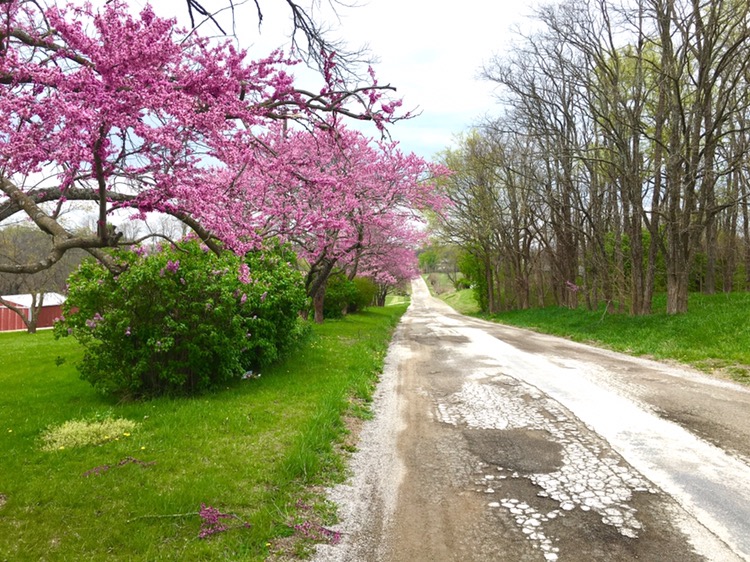 Looking ahead it looked like the end of the day would bring me near Excelsior Springs,  so I found a motel room. It’s great to get cleaned up again and do a little bit of laundry. Chinese-food room delivery was a treat as well.

23rd June Satturday Some wind this morning from the N. W. we Set out at 7 oClock, and proceeded on to the head of a Island on the S. S. the wind blew hard and down the river which prevented the Pty moveing from this Island the whole day, Cap. Lewis had the arms examined &c. at the lower end of this Island I got out of the boat to walk on Shore, & expected the party on Shore would overtake me at the head of the Island, they did not & I proceeded on round a round and extensive bend in the river, I Killed a Deer & made a fire expecting the boat would Come up in the evening. the wind continueing to blow prevented their moveing, as the distance by land was too great for me to return by night I concluded to Camp, Peeled Some bark to lay on, and geathered wood to make fires to Keep off the musquitor & Knats. Heard the party on Shore fire, at Dark Drewyer came to me with the horses, one fat bear & a Deer, river fell 8 Inches last night