“Should I pack up or wait for a while? It will likely get windier as the day progresses.” I took my time deciding as I slept in for a while.

When I looked at the river I decided to give it a try. After launching I was wishing I had been paddling earlier, but as the river turned the wind and waves built. I found a spot to land next to some reeds. After tying the kayak to some willows I find a nice shady spot in dry, dead grass. There I lounged and read.
In mid afternoon the wind seemed to let up a bit. I was antsy to make miles so I launched. The waves were definitely smaller. But then the river turned directly into the wind and the waves grew.

As Chris Hansen had warned, the bank was lined with rip-rap, and a railroad track, with rip-rapped shore as far as I could see. That would make it hard to land without damaging the boat on the rocks if the waves got bigger.

Ahead was a place where the bluffs receded from the shore. There should be camping across the track. I stepped out in knee deep water and carefully lifted one end of the kayak out of the water at a time, onto the rocks. When I climbed up to the tracks there was a lake on the other side! !&$@#. Ahead 1/4 mile were some trees. There should be camping.

I carefully launched, and several hundred yards later cautiously lifted the boat out again as the waves did their best to crunch the boat against the jagged rocks.

I loaded my pack and a garbage bag and went to check out the camp-spot. It was nearly ideal. The long, tall dry grass was flattened. It was well away from the tracks with a nice spot to set up the tent out of the wind and in nearly all-day shade. There were no roads. I’d have this place all to my self.
Back at the river I emptied the last items from the boat and carried it up farther where I tied it off in case the wind got crazy strong.

I’d done about eight miles. Better than nothing. What a beautiful, scenic site! No roads led here so I wouldn’t see anyone.

What had flattened all the grass? There were many old animal and fish bones, a can with teeth marks in it, a tattered piece of webbing, as well as part of an old soccer ball and tennis ball, both chewed up. I’d wondered what big animal had dragged those big fish out of the water over by the tracks. I think cougar kittens had been playing here a few weeks back! That explained the fish, the deer bones, and all the chewed up “toys” they’d gathered while the mother hunted. The balls had floated down the river. It made me smile to look at all those chewed up toys and all the flattened grass and think of the mock fighting and tugs-of-war that had gone on! I slept great. There was a good soaking rain last night. Hopefully it was widespread, it’s been mighty dry and I’ve passed many wildfire burns.

I’d planned to spend the whole day here with winds predicted to even stronger. They were. Although I’d have preferred another big day of paddling progress I was happy to be stuck in one of my favorite campsites of the trip. One downside was no coverage to get caught up on answering emails.

I put out my solar chargers and reread most of “Outlaw Platoon.” When the sun finally reached my tent in the afternoon I just went to a nice shady spot around the corner. I also took several naps, something I rarely do under normal conditions. I had plenty of food and polished off a box of Girl Scout cookies Chris had given me. It was a very pleasant little vacation with no packing or unpacking all day long. In the evening quail called from the bushes.  Crickets sang loudly. 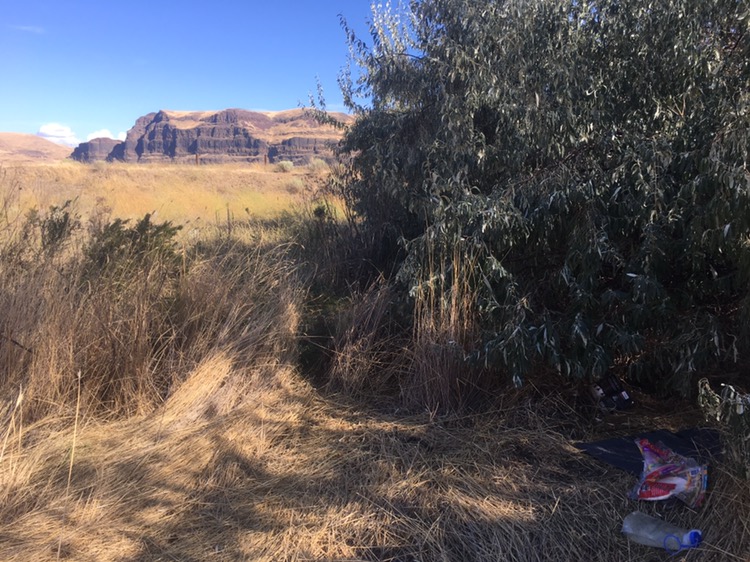 Clark: October 18th Friday 1805… Several canoes of Indians Came down and joined those with us… The Great Chief and one of the Chim-na pum nation drew me a Sketch of the Columbia above and the tribes of his nation, living on the bank, and its waters… We thought it necessary to lay in a Store of Provisions for our voyage, and the fish being out of Season, we purchased forty dogs for which we gave articles of little value, Such as bells, thimbles, knitting pins, brass wire & a few beeds all of which they appeared well Satisfied and pleased. every thing being arranged we took in our Two Chiefs, and Set out on the great Columbia river… Saw a mountain bearing S. W. Conocal form Covered with Snow…
Trip overview and route map with position updates:
https://bucktrack.com/Lewis_and_Clark_Trail.html

You’re making some incredible time, even with some wind blown days. Expect more wind as you close in on Hood River and the Dalles, but you already know that. September can still provide many calm days so just work through it. Stay safe out there.

Thanks Allen. Can you tell me anything else about the Lower Columbia? I’m thinking of walking the last miles to avoid tidal issues, and “the bar” etc.

Hey Buck, while I have paddled out in the ocean as well as further inland up the Columbia, I haven’t paddled the river from St Helens out to Astoria. Tidal influences affecting the river will depend on the ebb/flood from the ocean and releases of water from Bonneville Dam. Wind is also another factor greatly affecting conditions, as you are currently finding out. If I had to pick a place where you would probably notice tidal effects first, it would be the I-5 bridge in Portland or somewhere around there. Strength of currents will vary. Incoming tide will definitely affect… Read more »

Sensible stuff Allen, as usual. I definitely am not paddling over the Bar!

I’m not set on either the OR side or WA side right now. Basically I’m looking for the safest most straightforward way to get to the Pacific under my own power, so there will be at least some walking

somewhat less traffic on the roads on the Washington side because of the smaller towns/cities. More likely to find a camp spot on that side as well. The Oregon side would probably be your most direct route with good highway out to Astoria and a road shoulder to walk on. Likely the shortest distance as well. The highway on the Washington side heads inland for quite a distance making for a much longer walk. Still think, though, that if you hold to the Oregon side of the river you should be able to make it out to Astoria just fine… Read more »

Hi Allen, very sensible stuff. My current tentative plan is to keep paddling, landing on Clatsop Spit on the south side and portaging across. All contingent on weather, of course. I hope to portage the last dam tomorrow! Buck