Along the Loess Hills

I heard that most of the area got 2″ of rain. My guess is it rained at least that much at my camp in three hours. No wonder it wasn’t soaking in!

Since my sleeping bag stayed dry I would have been fine camping last night, but what a luxury  getting getting all cleaned up and everything perfectly dried, and to simply relax, surf some TV and not worry about putting in a full day’s hiking.

I got breakfast and then I went to Wendy’s and got several burgers to eat later. Sure looked like it was going to rain, and as a matter of fact it did a little bit, but the forecast was essentially correct, it didn’t amount to anything.

Not far down the road I was somewhat surprised to see one of the first walkers since I left the Katy Trail. He was walking along the edge of the field which seemed somewhat silly to me since it was so muddy. As I passed him he hailed me and came on over. Like most people, one of the first things he asked is where I was heading. When I told him, he said that he had been traveling for three years. We talked briefly and I wished him well and headed down the road.

He caught up with me as I turned on the side road and started heading north with me. From that point on I was mainly thinking about the best way to politely extricate myself from the situation.

For a couple of hours he told an endless series of stories of living on the road. He didn’t appear to be a drunk or a druggie, he seemed to be a fellow with mild mental problems who simply found it easier to live the homeless lifestyle than to deal with a more conventional existence. He had no belongings that I could see other then a nice waterproof jacket, long shorts, and sandals. Apparently people would give him various things: clothes, a sleeping bag, a tent, and he would either lose them or just simply get tired of carrying them and throw them away. His favorite story was trying to befriend a seal on the coast in California and the seal nipped him. He went and got a fish from a fisherman, gave it to the seal and then the seal let him pet him. He had stories of jumping freight trains, sneaking on greyhound buses and on and etc.

Happily we parted on good terms and he headed off down the road on his own, no money, no belongings, no real plan, just relying on fate.

As I have on other adventures, I listened to recordings of “This American Life” including two of my favorites, one entitled “Break Up” and the other entitled “Separated at Birth.” I highly recommend downloading and listening to them both.

Somehow today I got separated from my neck shade  that hangs down from my cap and protects the sides of my face and back of my neck from the sun. I used sunscreen today but I definitely want some kind of replacement.

It’s a beautiful evening and I’m camped a along the Missouri River, across from the L&C camp of July 20. The low sun is glittering off the fast current. Sticks are floating by. Countless frogs are calling and occasionally a bald eagle flies past. 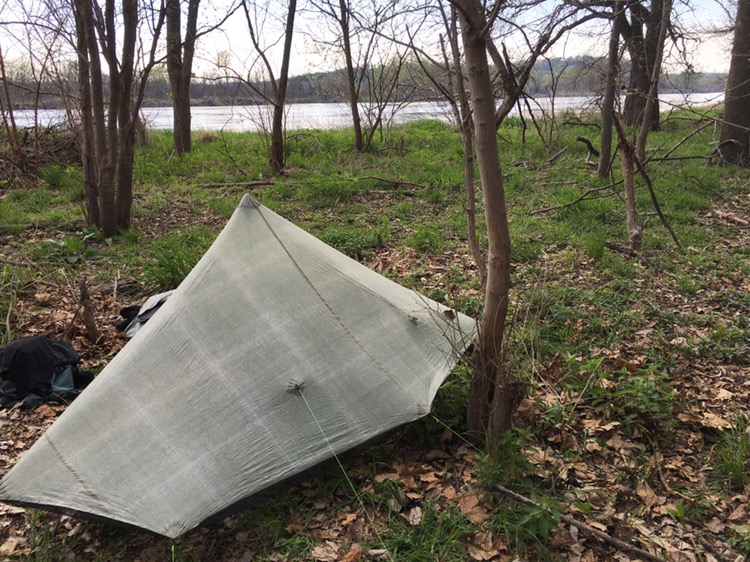 July 20th Friday 1804…I went on Shore took R Fields with me and went up this Creek Several miles & crossed thro the plains to the river above with the view of finding Elk, we walked all day through those praries without Seeing any, I killed an emence large yellow Wolf-The Countrey throu which we walked after leaveing the Creek was good land covered with Grass interspersed with Groves…