I woke up early in my camp along the Missouri River, quickly packed up and headed out to the road. 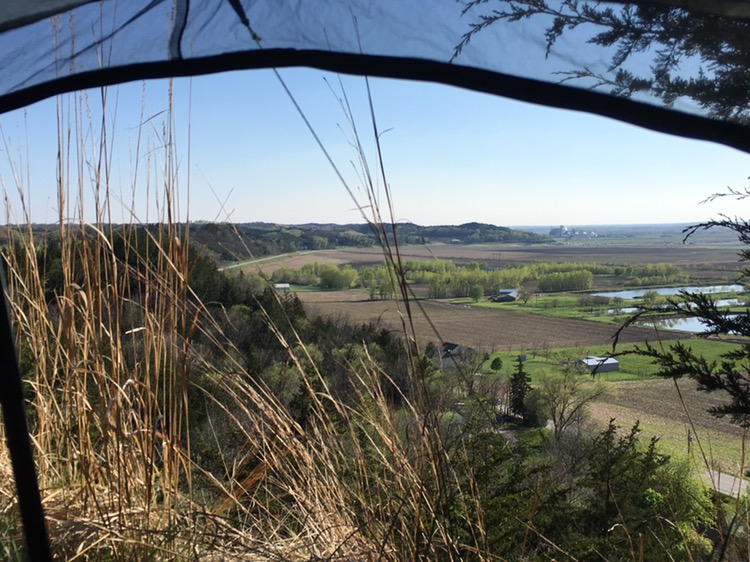 View from my tent door

This was a beautiful day for hiking, mild, with only a light wind in my face. Yesterday there was often a strong wind directly in my face so this was a pleasant change. It was a good day for animals. I saw many cottontail rabbits, heard countless thousands of frogs, saw wild turkeys and many bluewing teal and mallards.

For a long way the route paralleled the interstate at a reasonable distance. but much of the of the day the road I hiked closely followed the edge of the Loess Hills. Perhaps for the first time on this trip I got a glimpse of what appeared to be the American West, with some open hilltops covered by cedar trees in places, where it would seem mule deer would live rather than whitetails.

The air was often heavy with the smell of sweet blossoms including fruit trees and various other bushes and trees that I can’t identify.

In Pacific Junction there was quite a bit going on but the place I was hoping to get a burger was closed and when I asked there was no store, no gas station that sold food, or any other place to buy something to eat. That was OK, I had some of my own food left. Just then a bicycle with panniers came by. I have been watching for fellow travelers of the Lewis and Clark Trail so I yelled to him:
“Are you biking the Lewis and Clark Trail?” He appeared not to hear me and kept going. He stopped a short distance away. I went over there and asked again.

“Yes, if you can call it that,” he said. “They never mentioned the gravel on that last section. Do you know where the trail turns off here?”

I quickly glanced at my phone to verify. “See where that white truck is turning? It should be on that street.” He walked across the street and talked to a lady for a while to ask her the same thing. When he came back he said
“I don’t know any more than when I first talked to her. Maybe the post office will know.”

Well, actually I knew myself, and I had told him, but that seemed to have no effect, nor did he seem to have any interest when I told him that I was traveling the Trail myself.

He wasn’t having fun on his adventure, and unless I miss my guess, he won’t be having any fun until his attitude changes.

It definitely wasn’t the excited conversation of comeraderie I had expected when I first met my fellow travelers of the Lewis and Clark Trail!

Many miles later I was walking down the road enjoying the hills and the frogs and the blossoms and the scenery when I glanced down and saw a full giant jar of olives lying alongside the road. I was about ready to take a break so I found a nice shady spot and carried my prize over there. I was going to eat my fill of olives! When I opened the jar, though, the seal was broken. I’m sure they were fine, but I wasn’t starving so I sadly dumped them out. Some raccoon or possum was going to have a feast. 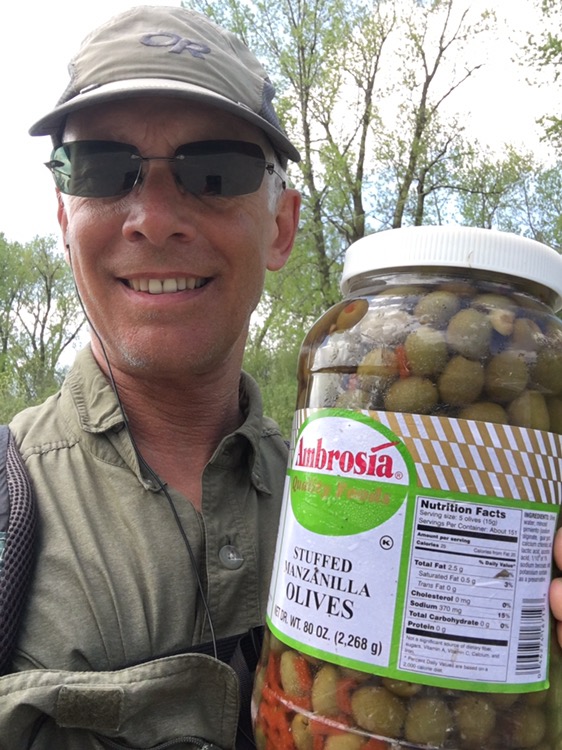 In late afternoon I walked between a huge seed oil plant, some kind of Google installation, and on the other side the Loess Hills. I walked a few more miles until I found some nice forested country in the Hills. I started looking for a flat place to camp, kept climbing and climbing until finally I got to the main ridge.

I’m camped at the most beautiful campsite of the entire trip, pictured above. I can see to Omaha and far into Nebraska. My tent is set up on a narrow ridgeline barely wide enough to be safe. There are native grasses here, having never been plowed, and it’s all cedar trees. It looks just like a campsite out West, until I look out onto the flats and then it looks like farm country of the Midwest. Tomorrow I’ll pass through Council Bluffs.

July 21st Satturday…at about 7 oClock the wind Seased and it Commenced raining passed many Sand bars opposit or in the Mouth of the Great River Plate…a great number of wolves about us all night R. Fields killed a Deer hard wind N. W. cold

21st July from the experiments and observations we were enabled to make with rispect to the comparative velocities of the courants of the rivers Mississippi Missouri and Plat it results that a vessel will float in the Mississippi below the entrance of the Missouri at the rate of four miles an hour. in the Missouri from it’s junction with the Mississsippi to the entrance of the Osage river from 51/ 2 to 6 from thence to the mouth of the Kanzas from 61/ 2 to 7. from thence to the Platte 51/ 2 while the Plat is at least 8.—The Missouri above the junction of the river plat is equal to about 31/ 2 miles an hour

Along the Loess Hills