It was nice packing up by electric light with no dew or wind or sand to deal with. I was paddling just after 5 AM. With luck I could get in a few miles before the wind shut me down. With even better luck I could get across the lake and use the other shore as a partial wind buffer to put in more miles.

It was calm when I launched so I was surprised when I got beyond the protected water to find big waves. There was a good storm last night and it takes a long time for the waves to dissipate. While it was still nearly dark, I could see natural gas being burned off numerous oil wells in the distance, some with flames many feet tall. It seems like an enormous waste of energy.

I stayed on the south side of the lake until I rounded the corner. The waves were starting to dissipate and I was also getting some protection from the shore now. It proved to be an easy crossing of the lake.

It was about 7:30 when I took my first break. I’d gotten spoiled at other places on this lake, there were no wonderful discoveries to be made, it was a simple gravelly beach.

Nearing the end of the lake now, both sides were still largely looking like badlands. But unlike badlands I think of, parched and seemingly lifeless, these badlands were mostly green and lush, covered with grass, or trees in the draws.

Subsequent break spots were much more interesting. I found a bison vertebrae, a hump bone with a long “fin” on top. Of course, also petrified logs and stumps, and miscellaneous other buffalo bones. I even found an old wheel with a wooden hub.

Flooded willows began to encroach on the lake, it looked as if they extended a mile out. The lake levels must have been down for several years in a row recently allowing the willows to grow. Now with the levels back up they’ve been drowned out. There was a considerable headwind but I’d been reasonably successful sticking close to the bluffs with some wind protection from them. I wasn’t enthusiastic about paddling far out into the lake to get around the willows and then working my way back.

I tried a shortcut knowing that there was a good chance I would run out of water. In fact the water did get increasingly shallow. What gave me hope is what looked like an old open channel ahead of me. Eventually there wasn’t enough water to paddle and I got out to pull the boat. That was nearly as difficult, with soft, sticky mud trying to suck my shoes off my feet. 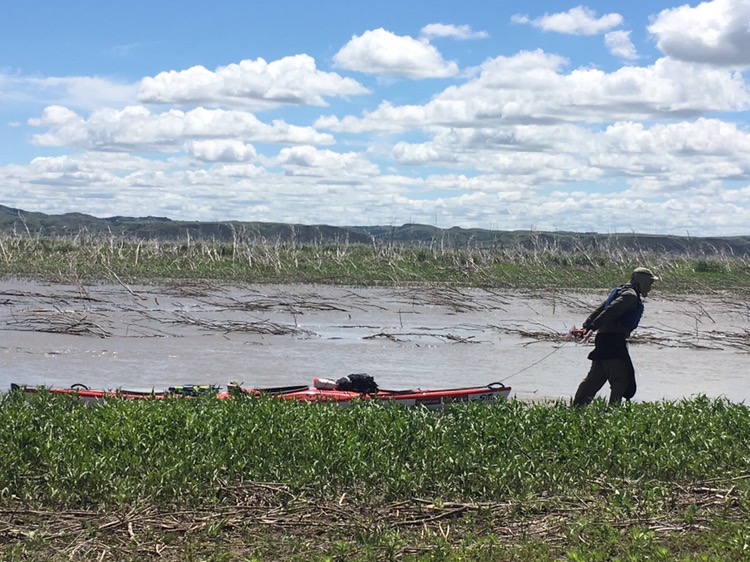 Dragging Upstream (yes, I am in the water.)

It was both encouraging and discouraging when I saw current marks swirling around the dead willows. I would probably reach deeper water, but now I would be fighting current as well. After another half hour the water began to get deeper and I was home free.

Lake Sakakawea  was behind me, the last of the huge Dakota reservoirs. It was a significant victory.

Now however I was back into some genuine current, making me choose my route carefully in order to make any progress. When I would take a break and look at the current it was hard to believe I was making progress at all, yet I was, sometimes 2 miles an hour or more.

Around 6:30 PM I decided to call it a day. Tomorrow the winds should be more favorable. I was in a no-mans-land for camping though, away from the bluffs and trees and out in a meandering delta area. I picked one of the higher spots with several living willows in the area and checked it out. There was a tent spot about 4 feet above the water that would work fine. I pulled the boat well out of the water, tied it off and began carrying year over to my tent site.

When I got back to the kayak I noticed many sticks and debris floating down the river. I learned on the Mississippi that that that was a sign of higher water upstream. I stuck a stick at the edge of the water and I’ve watched it since then and it’s only came up a bit. I’m confident I’ll be fine. It’s sunny and warm this evening with a pleasant breeze. I am pleased with today’s progress of about 25 miles or more.  Colter

Clark: 17th of April Wednesday 1805…some Pumice Stone floating in the river, I walked on the S. S. Saw great numbs. of Buffalow feeding in the Plains at a distance Capt. Lewis killed 2 Buffalow buls which was near the water at the time of dineing, they were So pore as to be unfit for use. …about Sunset Saw Some fresh Indians track and four rafts on the shore S. S. Those I prosume were Ossinniboins who had been on a war party against the Rockey Mountain Indians… Some verry large beaver taken this morning. those animals are made use of as food and preferred by the party to any other at this Season

Lewis: Thursday April 18th 1805. A fine morning, set out at an early hour. one Beaver caught this morning by two traps, having a foot in each; the traps belonged to different individuals, between whom, a contest ensued, which would have terminated, most probably, in a serious rencounter had not our timely arrival at the place prevented it… we were detained today from one to five P.M. in consequence of the wind which blew so violently from N. that it was with difficulty we could keep the canoes from filling with water altho they were along shore…

Lewis: Friday April 19th 1805. The wind blew So hard this morning from N. W. that we dared not to venture our canoes on the river… the wind detained us through the couse of this day, tho we were fortunate in having placed ourselves in a safe harbour.

Lewis: Saturday April 20th 1805. …soon after seting out, a part of the bank of the river fell in near one of the canoes and had very nearly filled her with water… the wind became so hard and the waves so high that it was with infinite risk [Clark] had been able to get as far as his present station… saw the remains of some Indian hunting camps, near which stood a small scaffold of about 7 feet high on which were deposited two doog slays with their harnis. underneath this scaffold a human body was lying, well rolled in several dressed buffaloe skins and near it a bag of the same materials containg sundry articles belonging to the disceased; consisting of a pare of mockersons, some red and blue earth, beaver’s nails, instruments for dressing the Buffalo skin, some dryed roots, several platts of the sweet grass, and a small quantity of Mandan tobacco… near the scaffold I saw the carcase of a large dog not yet decayed, which I supposed had been killed at the time the human body was left on the scaffold; this was no doubt the reward, which the poor doog had met with for… transporting her corps to the place of deposit.