After I made my last post a significant thunderstorm rolled in, accompanied by strong wind but minimal rain. I was in my camp tucked into the edge of the ash trees and rode it out without incident.

My goal for Friday was Tobacco Gardens Campground, a favorite stop for Missouri River paddlers.

With headwinds predicted I got an early start. There were some unusually beautiful tall, tan cliffs. When I walked the shore during one break I looked up the side drainage to see badlands and wildflowers in the morning sun. The shore was littered with brick-red stones, some banded, others with a yellowish or greenish cast, sprinkled with white rocks and black coal. On one stone I found a nearly perfect impression of a leaf that looked much like that of a modern trembling aspen. 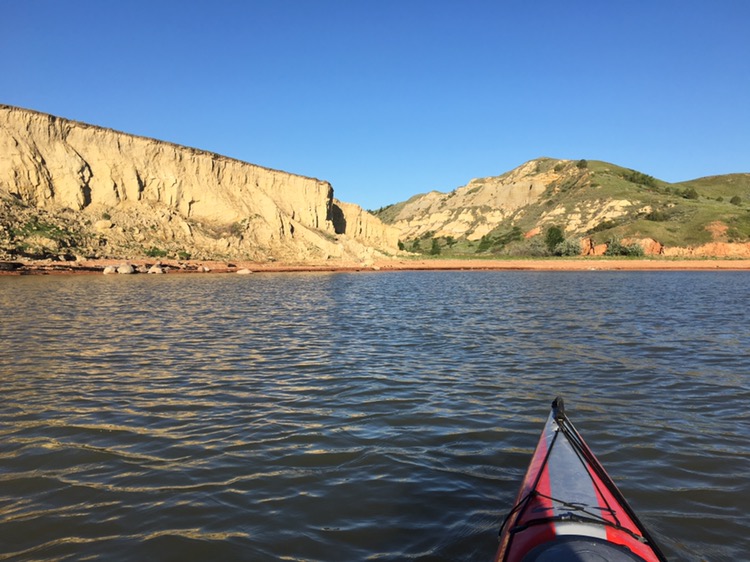 It was about a 13 mile paddle and I arrived at Tobacco Gardens about 11 AM. I walked into the dining room where I was met by a very welcoming Peggy, a well known River Angel to Missouri River Paddlers. Peggy showed me around for a bit and then got me set up in the bunk room.

I got a nice hot shower and ate a fine lunch and that evening an even better dinner.  In the afternoon I sorted out my gear and gathered up my laundry which the staff washed for me. Thanks!

My Minnesota friends Gary and Sandy arrived. They are on their way to Alaska and it worked out to rendezvous here. I had texted them a list of groceries to pick up for me which they were nice enough to do. We hung out and chatted in their nice RV.

It was stormy this morning, very windy, with impressive crashes of thunder and lightning and a hard rain. Gary and Sandy had me over at their RV for breakfast and we had one last visit before they headed off.

It was a nice relaxing day. And it turned out it was a very good day to take off because it was so windy.

I looked over my resupply options for the next 500 miles or so. I’ve got a general game plan which might involve winging it a little bit. I’m actually considering offering floaters cash for their remaining groceries at Judith Landing! One thing I’m sure of is that I won’t starve. I will resupply in Culbertson and get something at Fort Peck.

Peggy asked if I wanted to ride with the wagon train that was arriving here. They are primarily local people who ride their horses or buggies or hitch up their draft horses to wagons for a get-together. It sounded like fun.

Peggy drove me out to where there was a pleasant group of horses, kids and ranchers. Some of the kids were Peggy’s grandchildren. Peggy found me a wagon to ride in, driven by Milo and his wife Julie.

The kids were excited to tell the story of what had just happened: A beautiful draft horse had reared up and fell over dead, smashing the tongue of the wagon. A heart attack, some of them figured. The horse’s partner was eating grass and looking at his deceased friend with a wondering look. Growing up around a ranch or a farm teaches kids about the real world. They were bummed that the horse had died but perfectly willing to accept it as the way the world works.

One little girl had been riding in the wagon pulled by her grandfather’s now deceased horse. She joined us on our wagon. Along the way two other little girls and a little boy and their mom also hopped on board. A two-year-old brother rode his very own big horse with his dad riding on another horse next to him. 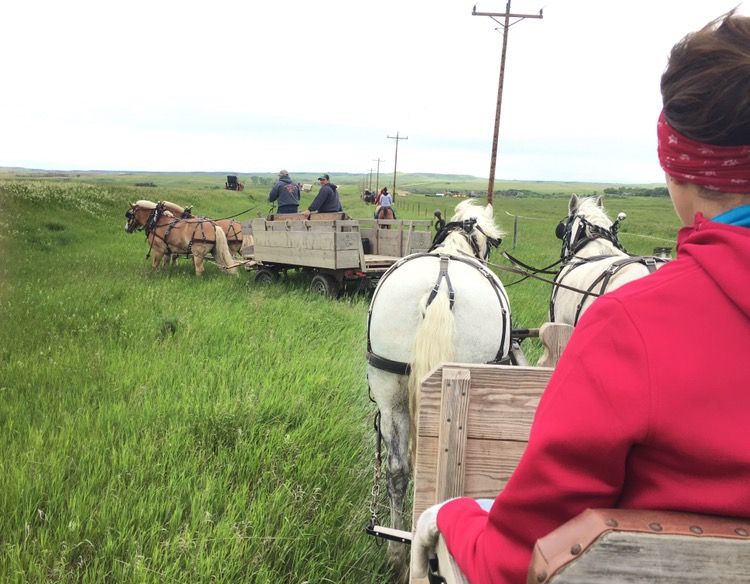 It’s interesting watching people who are accustomed to riding and being around horses. Most of these people had spent plenty of time on these horses chasing cattle, and it showed.

I had barely gotten back when Peggy asked Lyle to show me Birnt Hills. It was very near there that Lewis was accidentally shot, on the return trip, by another member of the party who thought his buckskins looked like an elk. The historical signs told of this incident and many others. Lyle grew up around this area and remembered the river before it was flooded and had many fascinating anecdotes to relate. For example, he told about the oil boom and how it has affected the area. One land owner was stunned when they received their FIRST oil royalty check for $763,000!

This evening I’m getting all packed up and organized to leave at zero-dark-30 in the morning. I hope to get a few miles in before the wind comes up. The next day should be a decent day for paddling.

Thank you so much Peggy! 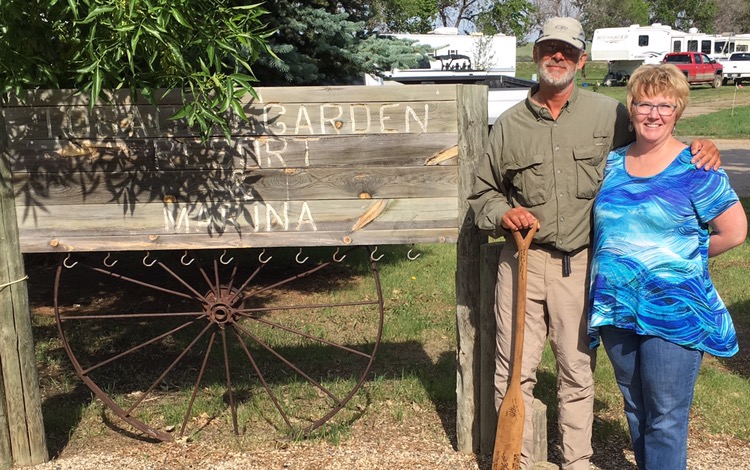 Clark: 16th of April Tuesday 1805 Wind hard from the S. E I walked on Shore and Killed an antilope which was verry meagre, Saw great numbers of Elk & some buffalow & Deer, a verry large Beaver Cought this morning. Some verry handsom high planes & extensive bottoms… a number of old hornets nests Seen in every bottom more perticularly in the one opposit to the place we camped this night… Great numbers of Gees in the river & in the Plains feeding on the Grass.

Keep an eye out for Kris Laurie plus his brother and nephew. They are below Fort Peck Dam. The river isn’t that wide in there so you should be able to spot them, perhaps close to Culbertson. If you still need to resupply at Fort Peck, a visit to Glasgow will likely be needed. The marina store is very limited, just a few snack things. There is a very small “store” out on the highway. I walked out there when I stopped but found sky high prices with very little selection. One option you might consider would be buying food… Read more »