It started out a calm, bluebird day. For a long while yesterday there was no shoulder to the road. Today there were very wide gravel shoulders. The morning sun was behind me, casting my ling shadow ahead. I like to walk facing traffic, not being a believer in unnecessary blind trust. But this morning the folks in my lane were driving into the blinding sun, so I walked on the other side, at the far edge of the shoulder.

I got to a hill and could see five miles ahead, up and down gentle hills.

When I stood up from my break later and looked behind me, my bluebird day was being erased by dark rushing clouds with curtains of blue rain beneath them.  The wind hit and with startling rapidity here was the rain. I  geared up, rain clothes flapping, deja vu.

Yet soon blue sky appeared and the rain ceased. The wind stayed fierce for the rest of the day. The sun and rain battled it out, the sun the ultimate victor.

At one point dust became a serious issue. Passing cars nearly disappeared as they slowed, trying to see. My eyes were getting gummy and grit crunched in my teeth. Luckily it only lasted a few minutes.

Today was the day when farmers appeared, working their fields. I’m guessing this is when corn traditionally gets planted in this part of Missouri. There were giant tractors, disks, planters.

I was getting low on water. Ahead was an old gas station. Out of business apparently. I walked over just in case and by golly they were open. Not only that but  I got pizza and ice cream. Major score.

My feet were feeling it and I was weary of getting buffeted by wind. I watched for a camp spot and lucked out with a dandy: a grassy bench in a ravine, mostly protected from the still roaring winds. 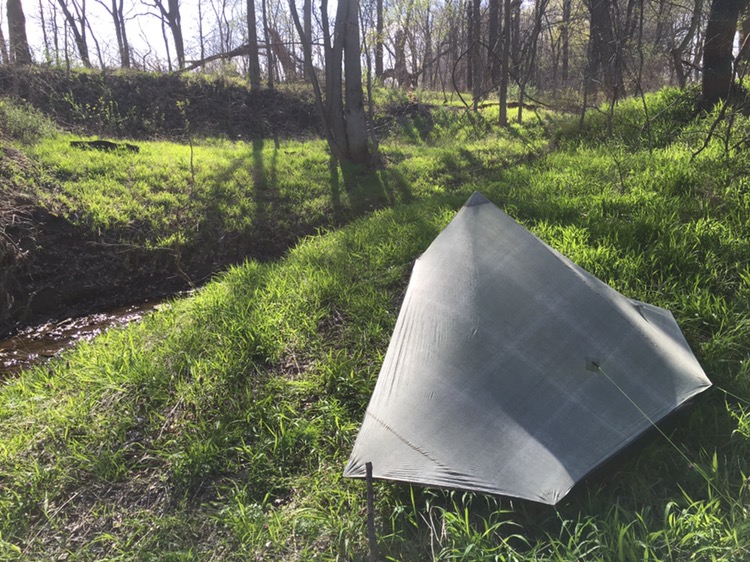 11th June 1804 Monday The N W. wind blew hard & Cold as this wind was imediately a head, we Could not proceed we took the advantage of this Delay and Dried our wet articles examin’d Provisions &c. &c. the river begining to fall the hunters killed two Deer G. Drewyer Killed two Bear in the Prarie, they were not fat. we had the meat Jurked and also the Venison, which is a Constant Practice to have all the fresh meat not used, Dried in this way.

June 12, 1804 …2 Caussease Came Down from the Soux nation, we found in the party an old man who had been with the Soux 20 years & had great influence with them, we provld. on this old man Mr. Duriaur to return with us, with a view to get Some of the Soux Chiefs to go to the U. S. purchased 300 lb. of Voyagers Grece @ 5 $ Hd. made Some exchanges & purchuses of Mockersons…

June 13…the antient Missourie Indians had a Village, at this place 300 of them were killed by the Saukees…this nation once the Most Noumerous is now almost extinct, about 30 of them, liveing with Otteaus on the R. Platt, the remainder all distroyed…

Clark, June 17, 1804 June 17 Sunday 1804 Cloudy Wind, S. E. Set out early S. 65 ° W 1 Me. Came too to Make ores, and a Cord for a Toe Rope all this day imployed in getting out Ores, & makeing for the use of the Boat out of a large Cable rope which we have, G Drewyer Came up a Bear & 2 Deer, also a fine horse which he found in the woods, Supposed to have been left by Some war party from the osages, The Ticks are numerous and large and have been trousom all the way and the Musquetors are beginning to be verry troublesome, my Cold Continues verry bad the French higherlins Complain for the want of Provisions, Saying they are accustomed to eat 5 & 6 times a day, they are roughly rebuked for their presumption, the Country about abounds in Bear Deer & Elk and the S. S. the lands are well timbered and rich for 2 ms. to a butifull Prarie which risies into hills…