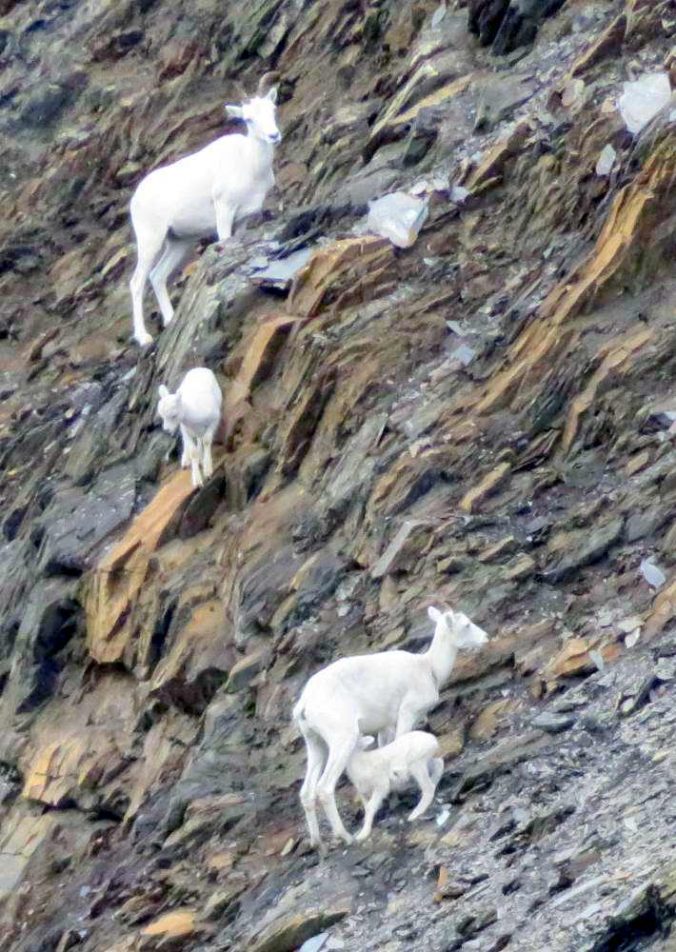 July 4   It rained during the night but as I pack up the rain is gone. My pack is considerably heavier now that I’ve picked up my food cache, but it still weighs less than thirty pounds, not bad with eight days of food.  Today I’m walking into the mountains,  into the Brooks Range. The scenery is dramatic in a different way from the coastal plain.  I’m walking south of course, and now of course I’m walking upstream. The river is a good travel corridor, a gentle climb towards the continental divide.

Occasionally I stop to admire especially beautiful patches of wildflowers, Lupines and Pink Plumes, Lapland Rosebay and Bell Heather and more, many of which I can’t identify. Closer to the coast most willows were still entirely devoid of leaves, with a few just starting to bud. Two weeks into summer and the growing season is just beginning! Here most of the willows have leafed out, and they are much taller than before. 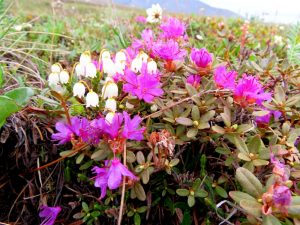 A steep rocky mountainside approaches the river ahead. There are scattered white dots near the bottom, Dall sheep likely. As I approach I can see them moving. Sheep! A few are feeding out on the flats. When they see me they scramble up into the rocks where they stand, watching me curiously. Other sheep, all ewes and lambs and young rams, barely glance at me, feeling secure in a place where they can easily scramble away from most predators like wolves and bears. Now and then a lamb gets a quick drink of milk from it’s mother before she loses her patience and wanders away, feeding on plants growing among the rocks. I take off my pack and observe them for a while, eating granola bars and sipping cold water. 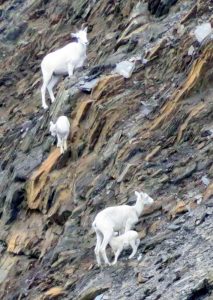 It’s only a few hundred yards farther when a steep slab of rocky mountainside meets an outside bend of the river. It’s almost certainly too deep wade along the bank. I walk along the river looking for a place that looks fordable. Caribou hair is swirling in the eddies. Caribou have been crossing up river. There are no shallow stretches but I pick the best looking spot and carefully wade out, planting my hiking poles at each step. In just a few steps it’s getting too deep so I carefully turn around and wade back to shore. Now what? I walk farther downstream but it doesn’t look any better. Maybe I can find a way along the bottom of the cliff?

I walk along the shore and begin working my way along the bottom of the cliff. The water is deep and cold and it’s difficult to find toe and hand holds on the steep rock.  If I fall in I’ll be swimming. Finally I reach  smooth, steep rock plunging into the river. Nope. I return to the gravel bar and look at the mountain above me. There’s a route that might be doable. At first it’s easy but then it starts getting steeper. I pause to catch my breath and to study the route. I look upriver. A ridge is moving. Caribou, thousands of them! They flow along the ridge and down the steep bank to the river. The leaders splash across and climb the bluff on the other side. More large bands follow the main herd, loping to catch up. I watch, enthralled. 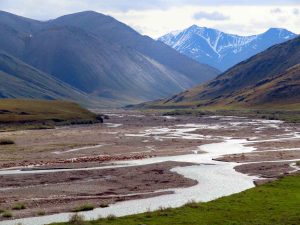 A smaller band of caribou crossing

When the herd begins thinning I look back up the mountain and resume my climb. I’m hanging on where I can and frequently sliding backwards. It’s not too dangerous yet but it’s  getting that way. I’m heading down.

At the bottom I scout for a ford once again, and then I make one more attempt where the cliff meets the river. Both are too sketchy. I try a different climbing route. It’s starting to get too steep. I pause to think. I look down to the river where a grizzly stands looking up at me!  He immediately turns and runs away, putting as much distance between him and me as he can. Killer grizzly bears are a very rare exception. More dangerous are  water and hypothermia. And falling. Once again I descend to the river.

Now what? I am loathe to do a long backtrack looking for a ford. I study the topo map on my GPS. Looks like it would be something like four miles to detour around this cliff.  There’s a nearby spot on a straight stretch of river that might be slightly shallower than my first attempted ford. I make sure my camera is double-ziploced and put on my rain pants, rubber banding the bottoms around my low gaiters. They won’t keep me dry but they will help keep my legs from being numbed by the cold water as fast.  I carefully wade out. It’s about thigh deep and reasonably swift, but now, near half way, it isn’t getting any deeper. Not too bad. The other bank is getting closer. I plant each foot and pole carefully until I reach the opposite bank, triumphant and safe. Yes!

I walk upstream until I reach the spot where the caribou forded. Ancient trails are worn into the bluff where countless generations have used this same crossing. The gravel bar is strewn with caribou hair, loose hair from their shedding winter coats, lost when thy shook off the river water. Nearby is a shallow cave. I walk over to explore. I wonder how many ancient human caribou hunters have taken refuge here, escaping chilling summer rains while awaiting the arrival of the caribou migration, or while butchering their successful kills? 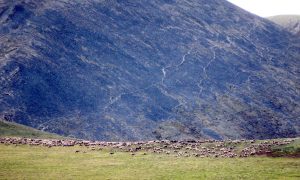 A bluff requires me to recross the river. This time the river is braided and I cross without serious difficulty.  I see another herd of caribou flowing across the mountainside, heading downriver like the others, north toward the coastal plain. Ancient trails lace the mountainsides from prior herds in other years, crossing the mountain passes. [view the above photo full size]

More caribou are coming down river and fording the Aichilik to my side of the river, so I climb a bluff next to the crossing to observe them. I pull out my camera and tripod to capture the experience. Band after band crosses in a roar of churning white water. 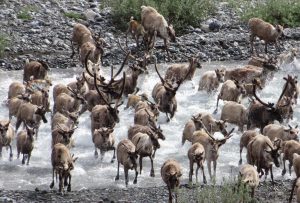 Each animal shakes itself in a cloud of mist, then trots across the gravel bar. They lope across the tundra, the calves scrambling to keep up, seeming to enjoy the excitement.  They all somehow know they need to be somewhere. They need to keep moving. [View this photo full size and look for the little calves. Notice the one looking at the water before it jumps in.]

A Dall sheep ram horn lies on the gravel bar and I stop to count its annual rings. Seven. Maybe eight. Late in the day rain is approaching. I find a camp site on the lee side of some willows. A porcupine comes walking out of the willows along the river. When he sees me he dashes awkwardly to a jumble of rocks. He’s so slow that I could easily have caught him. He relies on his quills to protect him from bears and wolves and foxes. He has no trees to climb for safety, but he does have an outstanding den site among the boulders, and plenty of willows to eat.

Today was a big day. In all my years in Alaska I have never been in a major caribou migration like this. Truly exciting. All those herds, there were thousands, perhaps 10,000 in all. TEN THOUSAND!

That must have really been something to see all those caribou. Love reading your journal. can’t wait to hear how it went going across the brooks range. What an adventure

It definitely was extremely cool. I’m glad you’re enjoying the journal. It’s hard to tell how many people are actually reading it! In the next couple of posts I will talk about crossing the Brooks Range.