Flying over the Brooks Range

Into the Wilderness, June 29

Few things are more important in adventuring than staying flexible with plans. On June 26 I was at the Fairbanks Airport waiting for my flight to Kaktovik (Barter Island). From there, I’d take a boat to the mouth of the Jago River and hike south to start my adventure.

“We’ve got a weather delay for Barter Island. It will be at least an hour. We’ll keep you posted.” The airline agent told us.  The flight kept getting delayed. I talked to some other passengers, Kaktovik residents, Inuit people.  Just recently I’d heard that there was still ice around Barter Island, a real surprise to me. I asked about current conditions.

“Can I get to shore in a boat? Or walk across the ice?”

“When do you think there will be enough open water for a boat?”

Waiting around in Kaktovik for weeks would be stressful, and expensive. I called Kirk, my pilot at Yukon Air who was flying my boat cache out. I asked about options for him to fly me out. He said he’d check his schedule.  In a few minutes he called back.

“I’ve got another hiker flying onto the North Slope on the 29th. You guys can fly out together. I can drop you off first. How about I drop you on the Aichilik River, at the mouth if I can. Sometimes ocean fog is an issue,  so I might have to drop you ten miles away from the coast.”

“That will work fine.” So a new plan was made.

The morning of the 29th I met Kurt, the other hiker, and we flew to Arctic Village on a scheduled flight. Kirk met us there and soon we were flying over the Brooks Range, having left the road system far behind. The Brooks looked cold and wild and infinite.

“That’s the Aichilik,” Kirk said, pointing down. I studied the terrain with interest, trying to gauge the difficulty. I was thrilled to spot a few scattered caribou. Ahead though, was bad news. We were approaching a wall of fog.

“How far are we from the coast?”

“Maybe 25 miles.” He swung the plane around and 30 seconds later we were bouncing along the ground. As we rolled to stop I turned around and thought hard about where each of my belongings was. I needed everything. I grabbed my pack, my hiking pole, and opened the green ammo can that held my bear spray and quickly jumped out.

Fog Rolling in on the Aichilik River

“Thanks for the ride!”

“Good luck! Sorry for the hurry.” He spun the plane around and roared off and was gone. It was only two minutes ago that we first saw the fog. It was now very, very quiet.

I pulled out my GPS. He was right, it was about 25 miles to the coast, but it was about 40 miles by my hiking route. I had barely enough food to make it to my next food/boat cache at the headwaters of the Coleen River, and now I’d have to stretch my food a couple more days, if not more, to make the 180 or so total miles I’d hike to the cache.

I quickly sorted out and cached most of my food in my white bear-proof “Ursack” which I stashed on a white snowbank. Already my feet were wet, and they would stay wet every day for a long time to come. I slung my now light pack and hustled downstream. Several caribou crossed the river and I sat down to take some photos of them. I continued, hiking fast, making good miles. In an hour or so I realized I’d made a significant error. I’d brought two days worth of food to get to the coast, but I hadn’t brought food to get back! Oh well, half rations for a while.

In another hour I saw some strange objects up ahead and was amazed to see it was three or four tents. It was a small guided group. All of us were surprised to see someone else out in this vast wilderness. The clients were stunned by my response when they asked about my plans.

“You’re going to be out here for two months? Crossing the whole state?? By yourself???”

“Hey, do you need any food?” Their guide said. Serendipity.

“I sure do, thanks!” I told them of my situation. They gave me two days worth of very good backpacking food. They were the last people I was to see for weeks.

As I continued on I hit some bluffs on my side of the river. I tried to ford the cold, fast water but it was marginal. I walked down the gravel bar a way until the river was braided out enough so it was barely over knee deep. On the other side was five foot thick aufeis (a German word for “ice on top”) stretching off to the north, formed during the winter where layer after layer of overflow freezes. I clambered up on top and continued walking north. The melt-water was cold on my running shoe clad feet. A cold drizzle fell. I stopped to slip plastic bags over my wool socks, then put my shoes back on. It helped a lot. But will I have to hike on this ice for the next 35 miles? And back?! How long will that take?

For a while I hiked on the ice and then alternated between ice and tundra and gravel bar. At about 10:30 PM I noticed a good camp site and decided to camp. Although the sun would not set this far north of the Arctic Circle, it had been a long day and I’d knocked out nearly 10 miles in four hours. I peeled off my soaked socks and shoes and wet pants, then crawled into my dry, warm sleeping bag. This was not a drill. 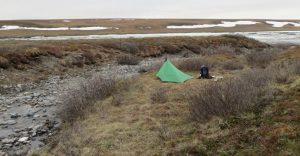 Click here for my journal calendar to check for other new posts!